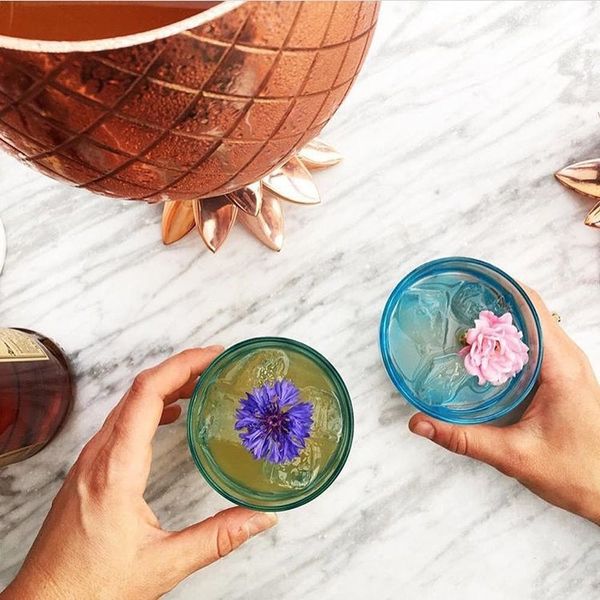 Going out for drinks doesn’t mean finding the best happy hour money can buy anymore. The uptick of studied bartenders, small-batch spirit makers, and Instagram-worthy locales stretch from coast-to-coast, practically guaranteeing you can find a proper drink wherever you go.

Some cocktail capitals are expected (New York City, San Francisco, Portland), while others, like Birmingham, Alabama, have been quietly and mightily positioning themselves at the top of the drink chain. So put down your $1 beer, and plan your summer travels accordingly.

1. Atlanta: About 10 years ago, brainy bartenders started sneaking complex cocktails onto restaurant menus, and soon the unsuspecting diners were converted. Today, the city has one of the biggest cocktail scenes in the South and more great bars that you could fit into one weekend. Though it’s fun to try. Just don’t drive.

Bar of choice: Ticoderonga Club — a tiki bar in the middle of Georgia. It is exactly as great as it sounds. Try the low-proof What Cheer with white port, lime, pineapple, and cider.

2. Birmingham: There are the classics, like Highlands Bar & Grill, where the prosperous have always turned for a proper martini, but it’s the new wave of creatives that make the Magic City’s bar culture stand out.

Bar of choice: Longtime B’ham bartender Feizal Valli and wife Rachael Roberts opened The Atomic Bar & Lounge this year to celebrate the place they call home. Most of the drinks (and even the art) are inspired by a local ace in the community.

We will be closed today for our annual employee appreciation party to celebrate all their hard work! Open tomorrow for dinner at 5pm, see you then!

3. Charleston: Like any good hostess, the city welcomes guests with a full (and diverse) stock of drink options. Choose your spirit, and hit the charming cobblestoned streets to taste what the city’s all about. Are you a gin girl? Sneak into The Gin Joint. More into mezcal? Consider Pancito & Lefty. Craving oysters and Cava? Leon’s Oyster Shop won’t disappoint.

4. Washington, DC: While you can still find plenty of dimly lit lounges serving up the old guard, the fun stuff happens in emerging neighborhoods and sprightly bars where epicureans let the imagination run. (Think: hand-drawn artsy menus that change often, at 2 Birds 1 Stone).

Bar of choice: DC native Derek Brown opened The Passenger in 2009, with the ingenuity of the then-new craft movement, and none of the pretense. Then came the tiny craft cocktail oasis within it called the Columbia Room. Both closed in 2014 and brilliantly reopened last year. In the new, three-part Columbia Room, you’ll find a Spirits Library, a tiny tasting room (a nod to the original), and a roster of educational experiences like the French Brandy and Agave classes.

5. Denver: Colorado leads the pack on beer (there are more than 140 breweries in the state), and Denver reflects that with dozens of microbreweries, tap rooms, and hop-centric locales. You can focus on the ales, but then you’d be missing out on the distilleries, mezcalerias, and fine underground bars that energize this fine city.

And we're back! It feels like Spring but it's still Winter. The perfect Sidecar weather #cheers #happynewyear #sidecar

6. Houston: Houston is one of the most diverse cities in the country, and that’s mirrored in its bar landscape. When Anvil Bar & Refuge opened in 2009, it set the stage for the Texas cocktail scene to blossom. From there, the founding partners and their apprentices have gone on to open a myriad of drinking dens, as varied as the city they occupy.

Bar of choice: We are partial to a woman-run bar, Julep, that plays up all the beauty and elegance you’d expect from a Southern charmer.

7. Miami: Once known as the land of overpriced cosmos and sweaty dance clubs, the Magic City has come into its own as the cultural destination it has always known it could be. Now you can go to a small bar or ritzy hotel and trust your bartender to blend a legit piña colada or mojito inspired by the nearby islands.

Bar of choice:Sweet Liberty — not only does this new-classic have one of the most knowledgeable and hospitable bar staffs (even on busy nights, every guest gets a napkin and water with drink); it’s also known for the legit DJ sets and late-night food (get the fried chicken).

Come sit in our courtyard and enjoy a taste of Barbados. This gin punch is a refreshing blend of citrus, coconut water and falernum.

8. New Orleans: Many a famous cocktail was invented in NOLA, so it’s no surprise people plan entire vacations around drinking their way through the city. Though the Bourbon Street bar crawl is worth doing once (maybe); you’re better off exploring the outskirts, like the storied hotel lobbies where famous authors imbibed.

Bar of choice: It’s almost impossible to name just one, but we’re a sucker for a place that will serve us a hibiscus cocktail in a pineapple or coconut. The best part? New Orleans’ lax laws mean you can take your Cane & Table pineapple drink to-go — talk about Instagram gold.

We're ready to embrace the lush life. Are you?

9. New York: New Yorkers didn’t invent drinking, but they did spearhead its revival more than a decade ago when they dug up classic recipes and reinterpreted them with fresh juices, homemade tinctures, and small-batch spirits. The suspenders, mustaches, reservation-only etiquette, and fanciful shaking trickled down as others adopted and adapted the trends. Now every city tends to forge its own path, but the Big Apple continues to be a major source of inspiration for impassioned spirit pros worldwide.

Bar of choice: Inspired by expat bars in Cuba during the ’30s through ’50s, BlackTail serves historically informed punches, sours, and other libations in a transportive setting.

10. Portland: Nobody does local like Portland, and that rings true in the cocktail department. The relatively small city has almost 20 distilleries and even more companies focusing on bitters, herbs, salts, and mixers, which bartenders use and blend with their own house-made juices and tinctures.

Bar of choice: At Ray (from celebrity chef Jenn Louis), bartenders play up flavors of the Mediterranean and Middle East (often overlooked regions) through drinks like the Russian Jew with Kahlua, vodka, and tahini.

When it's this chilly outside, we suggest grabbing a friend and getting cozy over dinner and drinks.

11. Salt Lake City: SLC bars aren’t just “good considering” that more than half the state residents are teetotalers or that liquor laws there are intense — they’re legitimately impressive. There’s a celeb-run bar that doesn’t suck, distilleries making off-beat spirits like beet vodka, and handsome bartenders that embrace Utah’s tough laws and use them as inspiration to be more creative.

Bar of choice: The interiors at Pallet are as sexy as the expertly crafted cocktails ranging from classics to house creations.

You're missing out if you haven't checked out our live revue downstairs yet 🎵 #strayplaystay 📸:@sibellacourt

Bar of choice: At Black Cat, you’ll feel incredibly chic sipping a Widow’s Kiss from the comfort of your leather banquette while the jazz plays on upstairs.

13. St. Louis: Don’t underestimate the Midwest’s taste for fine spirits. While its flagship drink, Budweiser, which was invented here in the 1800s and soared as America’s first national, isn’t exactly top-shelf, it does reflect the type of innovation you’ll find in the local bars today.

Bar of choice:Planter’s House, located in a meticulously refurbished 19th-century hotel. Ted Kilgore, credited with single-handedly reintroducing craft cocktails to STL, runs the show here and at the bar-within-a-bar inside Planter’s, called The Bullock Room (named after a pioneering bartender who served presidents and dignitaries up until his death in 1964).

From Your Site Articles
Stephanie Granada
Stephanie Granada is a freelance writer and editor, who splits her time between Colorado, Miami, and NYC. When she's not locked down in research-mode, reporting a travel story on the road, or identifying areas to bolster the Hispanic community, you'll find her playing outside, working out, or hiding out with a book. Happiness to her is hiking up a mountain, swimming in a beach of her native Colombia, powering through a hellish boxing class, or getting lost in a story with a glass of something delicious — preferably whiskey — in-hand.
Travel
More From Travel