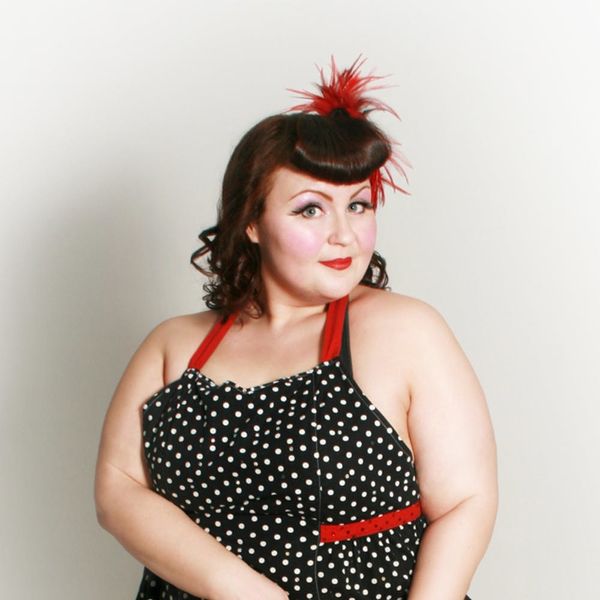 It’s a great time to embrace your gorgeous figure the way it was made. Heck, even Barbie is on board with challenging conventional beauty standards. But even though body shaming is quickly falling out of vogue, plus-size glamour girls are only starting to enter into the mainstream.

Burlesque starlet Lillian Bustle got a lot of attention for calling herself fat and beautiful without batting a curled eyelash during her TED Talk on stripping away a negative body image. To say she’s a body positive activist wouldn’t be giving this lady enough credit. Her artful striptease acts playfully celebrate the female body, with all of its stunning curves. Lillian sat down with us to chat about how she developed the guts to bare it all.

Before she tore it up on the stage with her hilarious striptease acts, Bustle worked a desk job at an Internet company. Back then, she struggled with body issues. During the boom of “Humans of” blogs, a coworker gifted her a People of Walmart calendar, which they both thought was hilarious. But after colleagues stopped by her desk and they joked about it — herself included — it wasn’t so funny anymore. “I laughed because these were real people who were just going shopping,” Bustle says. “It was very unfair and very classist.”

But seeing those unedited images of humans roaming shopping centers made her question what was wrong with looking normal. Lillian thought that maybe normal could be beautiful. People, particularly women, are viewed harshly when they don’t conform to the media’s standard of beauty, but research says that the more individuals see diverse body types, the more they begin to like them. That was particularly true for Lillian.

Seeing and accepting other physiques changed how she thought about herself. Now, as a burlesque performer, she delights in introducing her audience to her unique, gorgeous figure. “You get to decide that you’re worth looking at,” she says in her TED Talk. “You can use the stage in burlesque to reinvent yourself and you can do it in daily life too.”

For those struggling to see their inner glamazon, she recommends seeking out positive images of other women. Sites like mybodygallery.com match your height, weight and body type to ladies with similar builds. She also says following role models on Instagram and Tumblr is a great way to remind yourself every day what real people look like and that looking normal is just fine.

Who are your body positive role models? Talk to us @britandco!

(Photos via Bettina May)

Ashley Mason
Ashley is a freelance lifestyle writer based in Brooklyn. Since 2009, she has been drinking her way through the city’s diverse coffee shops. When she’s not hunched over her laptop, she can be found trying new restaurants and playing with her Beagle mix Signe.
Body Positive
Beauty News
Body Positive Healthy Living
More From Beauty News