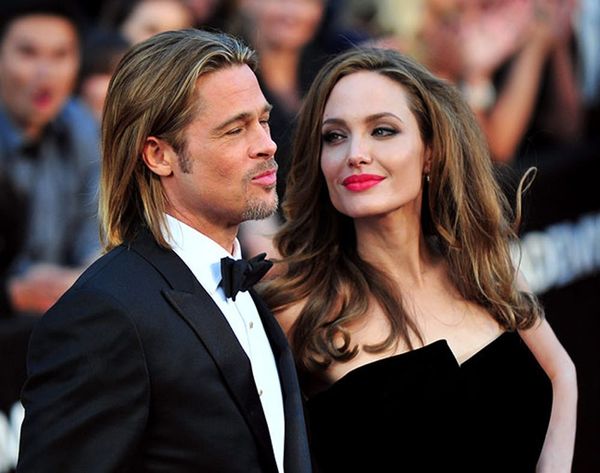 It finally happened. After being engaged since 2012, Brad Pitt and Angelina Jolie tied the knot in an intimate August 23 ceremony. And even though we tried to predict what dress Angie would wear down the aisle, we never saw *this* kind of non-traditional gown coming. With the help of Luigi Massi, master tailor at Versace Atelier and the creative Jolie-Pitt kids, Angie DIY-ed her wedding dress.

As seen in a joint exclusive by People and Hello!, the bride wore a simple, white satin gown with a ruched bodice and a floor-length veil, which were both embellished with colorful doodles and drawings made by her children. The kids even helped dress the groom — according to People, Brad forgot to pack a tie and ended up borrowing one from one of his sons. (Cue the awws).

But the Jolie-Pitt crew didn’t stop there. Besides playing wedding dress designers, the six children had a hand in writing their parents vows, as well as played key roles in other parts the ceremony. Pax, 10, not only baked the cake, but also walked his mother down the aisle with 13-year-old Maddox. Zahara, 9, and Vivienne, 6, served as flower girls, while six-year old Knox and eight-year-old Shiloh acted as ring bearers.

“It was important to us that the day was relaxed and full of laughter,” the newlyweds told People. “It was such a special day to share with our children and a very happy time for our family.” For a day that’s usually all about the bride, Angie made sure in every way possible that the event was a total family affair. Can you say best mom ever?

Do you love Angie’s dress? Tell us what you think of her wedding attire in the comments below.