This Is How Brie Larson Trained to Become Captain Marvel 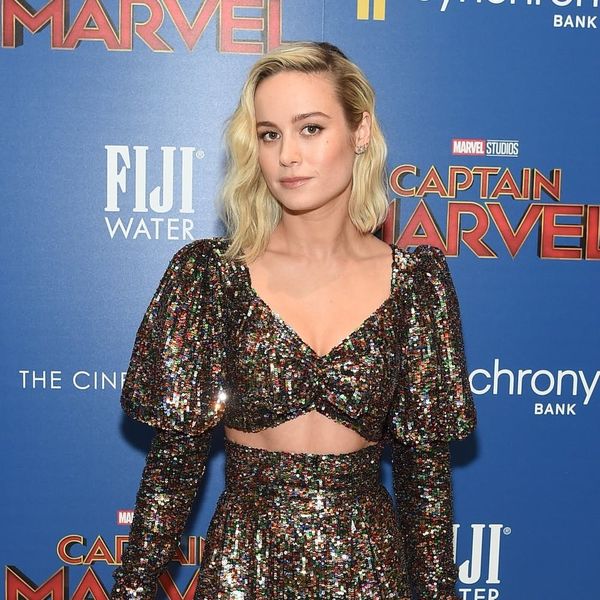 “Higher. Further. Faster.” That’s the motto of the titular character in Captain Marvel, the first female-led superhero movie in the Marvel cinematic universe, which aptly opens on International Women’s Day. Those three words also apply to Oscar winner Brie Larson, who trained extensively for nine months to step into the role of Carol Danvers, AKA Captain Marvel. In order to achieve her own superhuman strength, Larson worked with the founder of Rise Nation in Los Angeles, Jason Walsh, who has toned notable bodies like those of Alison Brie, Emma Stone, and Emily Blunt, among others. Here’s how Larson went from not being able to do a push-up to pushing a 5,000-pound Jeep.

Walsh wants to make something clear — becoming a superhero doesn’t happen overnight. “We had lots of time,” says Walsh. “She came to me nine months prior to filming Captain Marvel because she wanted to incorporate basic training and not have a lot of pressure on herself by the time Captain Marvel came around. It’s the right mentality.” In the first three months of training, Walsh and Larson established the fundamentals and built functional strength. “The mantra that I put out there is ‘there’s nothing that feels better than being strong,’ and that’s what I really wanted to implement and instill in [Larson].”

Walsh says they focused on certain types of “primitive movements,” such as hinging at the waist, squatting, lunging, vertical pushing/pulling, horizontal pushing/pulling, rotational aspects, and anti-rotational aspects. Most of the conditioning was done using heavy weights and varying the amount of rest Larson was getting in between exercises. Whether it was deadlifting, squatting, or pushing a sled, Walsh would manipulate different variables in order to get Larson to adapt and get stronger.

For the next three months, while filming Avengers: Endgame, Larson was on a maintenance program, which included homework and in-person training with Walsh when she was in Los Angeles. When she came back, that’s when things were dialed up. For the last three months of training, Walsh used a progressive overload technique, a standard formula that many strength conditioning coaches use. That meant revisiting the moves Larson had perfected months earlier and finding ways to safely add stress to take her to the next level. Says Walsh, “The science of it is how well can we get her to recover, come back strong, do it all over again, and just add more, whether that adding more is weights, reps, sets, tempo, foot placement, or hand placement.” Larson had both short-term and long-term goals to hit, such as a certain number of pull-ups, weighted push-ups, or deadlifting over 200 pounds (she ended up doing 225). And having a trainer was important as well — Walsh would push her further on some days and hold back on others depending on the situation.

A training highlight - pushing @risemovement almost 5000lbs Jeep(with a full tank of gas and Alyssa behind the wheel for safety!)for 60 seconds. In Captain Marvel @nike Metcons! It’s a strong vibe but I like it.

As for that now-famous video of Larson pushing a Jeep for a solid minute, Walsh says, “that was never a goal. I don’t train people to push a Jeep.” At the time, Larson was “pushing a really heavy weight on a sled, her form was fantastic.” Larson had seen Walsh do it and wanted to give it a go (NBD). Walsh is careful to point out that they had trained smartly, and it was a very controlled environment with someone behind the wheel. (Note: Do not try this at home.)

Cars aside, Walsh says getting stronger also helped Larson with her character building for the film. “She came in and she couldn’t do a push-up or a pull-up. I just kind of filed that in the back of my mind. And the day you do your first pull-up and your first real push-up, it’s kind of an a-ha moment. Once you start to believe and you start to feel that strength of what you can do, it’s life changing. It affects everything — your confidence, the way you approach things, the way you see things.”

There were other aspects to Larson’s training as well. Recovery was extremely important, whether that was sleep (“we had her so worked that the sleep took care of itself”), hydration, or using meditation through apps like Headspace for mental health. Nutrition-wise, Walsh says he sends all his clients to a dietician to get bloodwork done to ensure there are no endocrine or hormonal issues that could hinder any progress. Once that was settled, Larson’s diet started out with a short term calorie deficit. But as the training increased, they increased her calories by “a lot, because she was ravenous” from working out so hard and so much. Larson also took in supplements like Momentous protein drinks, Biotest creatine, and Hanah Ashwagandha to support recovery.

Walsh also worked with Disney and Playbook to develop a free two-week training program that is very similar to the one he used with Larson when she first started training. The workout is designed to build a strong foundation and includes a series of 45-minute sessions that include squats, lunges, core exercises, and foam roll series.

If you’re looking to get a for that quick, superhero body, though, Walsh wants to temper your expectations. “It’s really about the big picture and the long term. You’ve got to dedicate yourself, stay regimented, and make sure you’re doing the small things right daily. It’s a cumulative effect, and eventually, you start getting better and better and better. It takes time.”