All the Inside Scoop from Brit Morin’s 2019 Grammys Experience 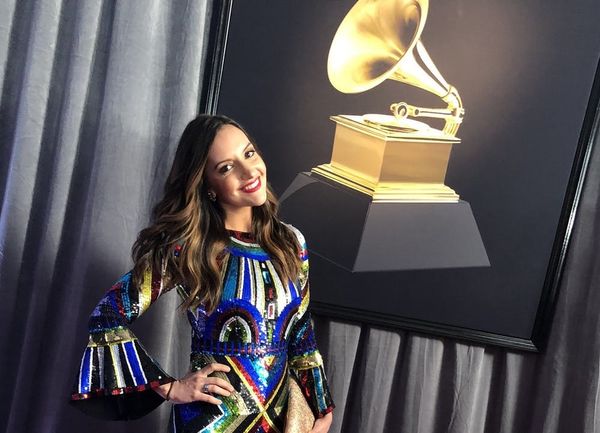 The 2019 Grammys brought out tons of stars and special guests — including our very own Brit Morin! Brit flew to LA this weekend for the full Grammys experience, from the MusiCares tribute to Dolly Parton on Friday to the star-studded red carpet and awards ceremony on Sunday. Scroll down to see some of her photos, and to get the inside scoop on music’s biggest night, including what they don’t show on TV.

Walking the red carpet in a stunning, sequined Alice + Olivia gown, Brit spotted celebs including Maren Morris, Meghan Trainor, the Backstreet Boys, and Dan + Shay. The carpet was very long, but that Grammys backdrop you see in most of the photos wasn’t one continuous wall — it was actually one of a few, surprisingly small, individual setups designed specifically for photos.

Inside the actual ceremony — which was held at LA’s Staples Center, home of the Los Angeles Lakers, Clippers, and Kings — there were two different stages. When one was live, the other was in full-out construction mode for the next act (which explains how Cardi B’s elaborate purple set seemed to appear out of nowhere). There were also maybe 20 cameras zooming around the arena at all heights to capture every angle of both the audience and the stage.

In between performances and awards, while those of us at home were watching commercials (including the new Aladdin teaser!) or running to the kitchen for more snacks, guests inside the show milled around and chatted with their fellow nominees and presenters. Many changed outfits — more than once! Some celebs had as many as three looks: one for the red carpet, one for their performance, and one for the ceremony.

Also, in case you had any doubt, the surprise factor was real. We’ve always wondered if people know the winners ahead of time — some shows reportedly notify them in advance, so they make sure to show up — but at the Grammys, there was a legitimate sense of suspense for each category.

As viewers saw on TV, there was also a major focus this year on female empowerment. Following last year’s #GrammysSoMale backlash, the Recording Academy made a concerted effort to spotlight women at the 2019 ceremony, first tapping Alicia Keys to be the first female host since Queen Latifah in 2005, and then including segments like the opening with Michelle Obama, Jennifer Lopez, Lady Gaga, and Jada Pinkett Smith.

“I’m so proud to be a part of a movie that addresses mental health issues,” she said as she accepted an award for “Shallow,” from A Star Is Born. “They’re so important. A lot of artists deal with that, and we’ve got to take care of each other. If you see somebody that’s hurting, don’t look away. And if you’re hurting, even though it might be hard, try to find that bravery within yourself to dive deep and go tell somebody and take them up in your head with you.”

Also high on the list: the representation for different genres across the top categories. Record of the Year went to Childish Gambino’s “This Is America,” Album of the Year went to Kacey Musgraves’ Golden Hour, and Best New Artist went to Dua Lipa. There was also a great mix of performers — something for everyone!

What was your favorite moment from the 2019 Grammys? Tell us @BritandCo!