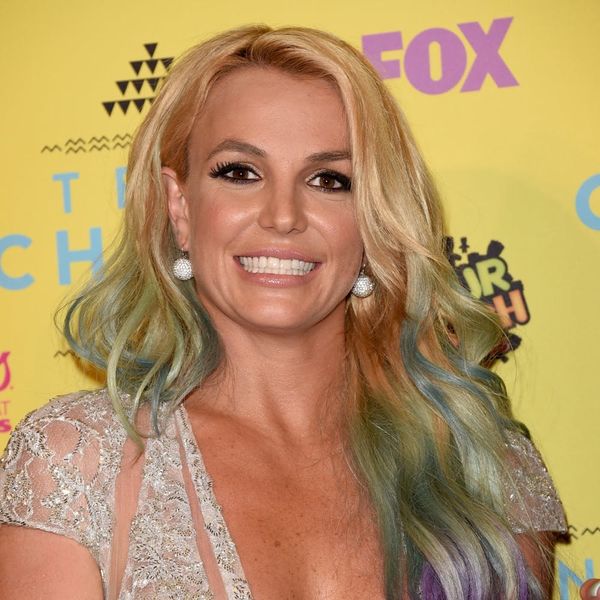 Though countless pop singers have made their mark (or at least tried to) by stealing Britney Spears’s sound, mimicking her moves and copying her style, this time around Brit has taken a page from someone else’s style book. She’s just thrilled fans with the news that her next album (which happens to include the Justin Timberlake-topping “Make Me”) will be out soon enough, and she also gave us a glimpse at the album cover — and holy wow, does she ever look like another pop star.

While we’re super excited for her (seriously, woo!), we can’t help but notice one other thing about Brit’s new album cover. She’s totally twinning with another pop star: Kesha.

In the pic, Britney’s blonde hair is pulled forward around her face as she stares into the camera lens. A lace collar with black detail gives her outfit a classic look, while Brit’s expression is all about sultriness. And although she absolutely slays, we can’t help but notice that she TOTALLY looks like Kesha’s twin. Basically, if someone created a Britney-Kesha clone, this album cover pic is what she would look like.

Desiree O
Desirée O is a ‘Professional Bohemian’ who loves anything and everything related to the arts, entertainment, and pop culture. She ADORES being a ‘Newsy’ for Brit + Co, covering all of the latest tidbits of awesomeness that you want to read about. When she’s not writing, she’s either making messy art, going on long adventurous walks with her camera, or poking around over at bohemianizm (http://www.bohemianizm.com/). You can find out about Desirée O and her work at http://DesireeO.com/ or follow her on Twitter @DesireeO.
Celebrity Style
Pop Culture
Celebrity Style Music
More From Pop Culture