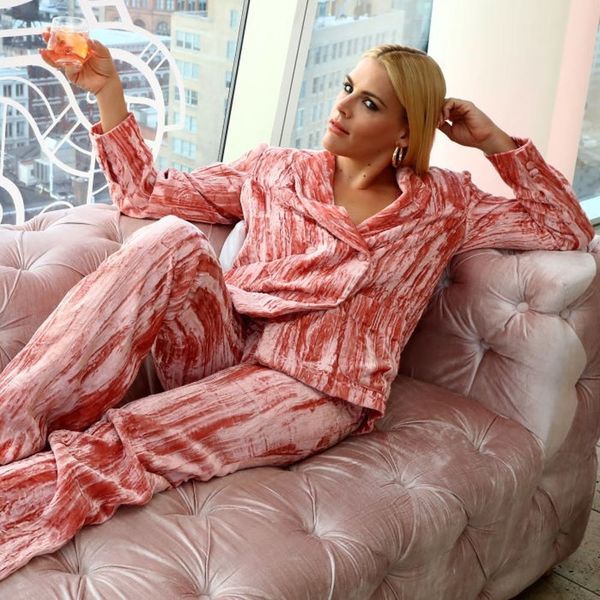 Busy Philipps is about to become part of a very small group of women chosen to host a late night talk show. Later this month, she’ll join the ranks of Sarah Silverman, Chelsea Handler, and Samantha Bee with the launch of E!’s Busy Tonight, an interview show that promises to deliver viewers their dream BFF’s “unique and hilarious point of view on literally everything.” Yes. Please.

The new gig is a huge achievement, one that Philipps feels she was destined for, but the road she took to get here was rough. In her upcoming book, This Will Only Hurt A Little, the internet’s fave celebrity Instagrammer tells the story of why she wanted to become an actor and reveals how hard the industry was (and is) on women on a daily basis. The book goes beyond the headline-grabbing stories that have fueled the #MeToo and Time’s Up movements to document the smaller, everyday microaggressions that women in Hollywood encounter throughout their careers.

Which isn’t to say that Philipps doesn’t have her own stories to tell about men behaving horribly in Hollywood.

It happened on her first big job — the cult classic series Freaks and Geeks, a show that propelled the majority of its key cast members from complete unknowns to success and stardom (think: Linda Cardellini, Jason Segel, Seth Rogen and, of course, James Franco). But despite the fact that the show was, for many of its stars, a debut role, one actor, says Philipps, still behaved as though he was already a precious A-lister (and an abusive jerk).

She recalls an on-set, cameras-rolling incident in which a Franco temper tantrum resulted in him shoving Philipps to the ground and knocking the wind out of her while shouting “Don’t ever touch me again!” (Touching him was, she says, an instruction given to her by the director but apparently objected to by Franco.) Traumatic? Yes. Humiliating? Absolutely. And yet it’s the smaller incidents and casual insults that seem to weigh on Philipps as she talks about what actresses go through as they try to build a career.

On Dawson’s Creek, she faced complaints from the wardrobe department about how clothes didn’t fit her as easily as they fit co-star Katie Holmes. One woman in the wardrobe department fretted over how she had to camouflage Philipps’ body from her neck to her knees. After being given parts in pilots, studios would not-so-politely inform her that a show’s success hinged on her losing weight. Networks outright rejected her — against the wishes of directors and showrunners — for not dropping post-pregnancy weight like it was her one and only job in the world. And even after she’d established herself in Hollywood, the studio behind ER felt justified in paying her less than half of her regular rate.

Philipps was left believing that she didn’t have a voice in Hollywood, and she can’t be alone in feeling that way. Her story shows that studio executives, producers, directors, and even other actors are abusive when they think they can get away with it — and they think they can get away with it because the abuse they’re dishing out is directed at women (who aren’t allowed to be angry, assertive, or worst of all emotional in retaliating). Sexism in Hollywood isn’t centered around a handful of bad guys like Harvey Weinstein and Bill Cosby — it’s systemic. Philipps’ book, which candidly calls out men (by name!), is one small step toward ending it.

This Will Only Hurt A Little ($27) is out now. Philipps’ new show, Busy Tonight, premieres October 28.

How excited are you for Busy Philipps’ new late night talk show? Let’s discuss on Twitter!

Corrina Allen
Corrina Allen is a film + television + travel writer from Toronto. Her journalistic goals include a backstage interview with David Byrne, the fictional character she identifies most closely with is John Wick, and her favorite dead person is Vladimir Nabokov. She never, ever Instagrams photos of her food (just her dog).
Books
Creativity
Books Celebrity Goods
More From Creativity