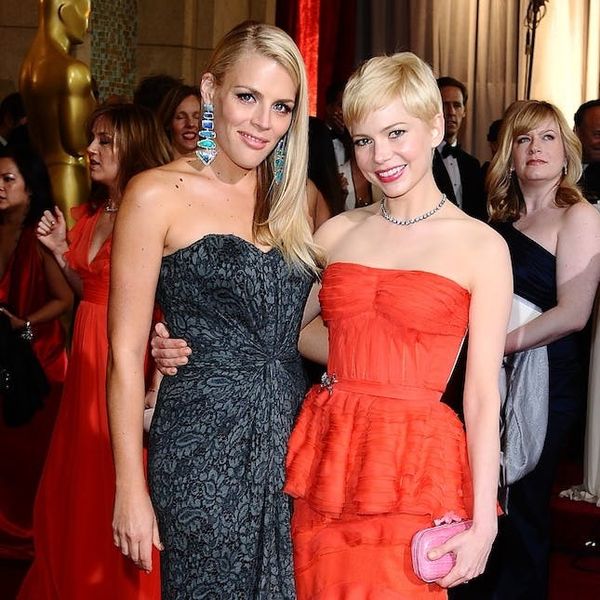 Michelle Williams and Busy Philipps pretty much epitomize what grown-woman friendship should look like — in more ways than one. Not only do these two Hollywood stars support each other on and off the red carpet, but they look seriously stylish doing so. From awards shows to airports, Philipps and Williams are all kinds of girl-power goals. Isn't that what friendship is all about? Of course it is. In honor of our favorite well-dressed duo, we're having a look back at their best style moments. Because buddies who slay together, stay together. (Photos via Stephane Cardinale - Corbis/Corbis via Getty Images, Bryan Bedder/Getty Images for FIJI Water, BG009/Bauer-Griffin/GC Images, Ian West/PA Images via Getty Images)
Twinsies: At the premiere of I Feel Pretty, the BFFs matched in all black everything. Philipps was dreamy in a Christian Siriano gown, and Williams stunned in head-to-toe Louis Vuitton. (Photo by Axelle/Bauer-Griffin/FilmMagic)
Front Row Friendship: The ladies took Paris Fashion Week by (stylish) storm, attending the Louis Vuitton show together. Williams served up '70s retro vibes in a Vuitton coat while Philipps gave a little '90s realness. Of course, the ladies sported coordinating logo bags. (Photo via Stephane Cardinale - Corbis/Corbis via Getty Images)
Paris Pals: With coordinating logo bags (again) and contrasting outfits, Williams and Philipps were pretty much the yin to each other's yang at the opening of the Louis Vuitton boutique in Paris. We love how each lady rocked leather in her own distinct way. (Photo via Pascal Le Segretain/Getty Images)
Velvet Vibes: Both leading ladies opted for the plush fabric at the Academy Awards in 2017. Williams rocked a Louis Vuitton (she's a spokesperson for the brand, BTW) gown with a beaded skirt while Philipps went for all-over velvet with peekaboo detailing by Elizabeth Kennedy. (Photo via Frazer Harrison/Getty Images)
Laid-back Ladies: The pals struck a '90s note at LAX — Philipps in distressed denim, Williams in a printed maxi, and both rocking throwback sunglasses. (Photo via starzfly/Bauer-Griffin/GC Images)
Shine On: "On Awards nights we wear sequins." OK, maybe they didn't say that, but this duo's matching sparkly gowns at the Screen Actors Guild Awards in 2017 led us to believe they planned this shiny moment. The Fosse/Verdon star opted for a metallic Louis Vuitton (natch) while the Cougartown alum chose a tonal purple Jeffrey Dodd number. (Photo via Steve Granitz/WireImage)
Flower Power: At the Golden Globe Awards in 2017, both ladies went floral and Spanish-inspired. Williams' white lace Louis Vuitton (plus a sweet black ribbon choker) and Philipps' black, floral embroidered Stella McCartney gown played off each other perfectly. (Photo via David Crotty/Patrick McMullan via Getty Images)
Luxe Looks: The friends coordinated at the Critics' Choice Awards in 2016 in rich fabrics and metallic clutches. The Vuitton ambassador dazzled in the brand's brocade column gown as the Drunk History star went bold in a long- sleeve red lace dress by Martha Medeiros. (Photo via Axelle/Bauer-Griffin/FilmMagic)
Downtime Duds: Casual cool? Check. The ladies channeled their inner '90s chicks in 2016 (they did meet on the set of Dawson's Creek). (Photo via BG009/Bauer-Griffin/GC Images)
Smile Pretty: The gals walked the Tony Awards red carpet together in 2016, where Williams was nominated for her role in Blackbird. The petite stunner set off her white Louis Vuitton gown with a bright red lip that played off of Philipps' coral Ingie Paris floral gown. (Photo via Bryan Bedder/Getty Images for FIJI Water)
Gown Gals: Williams' love affair with Louis Vuitton dates back to 2012, when she donned this coral stunner for the 84th Academy Awards (where she was a Best Actress nominee). Her partner in crime supported her main chick in a lacy gown by Dolce & Gabbana that was just understated enough to let her bestie take center stage. (Photo via Ian West/PA Images via Getty Images)
Haute Headbands: There's always an element that ties these ladies' looks together — and at the Golden Globe Awards in 2012, it was a shared love of flapper-inspiration. Williams chose a black retro headband to wear with her burnout Jason Wu gown and Philipps donned a thinner silver style with her white fringed Temperley London gown. (Photo via Jeff Vespa/WireImage)
Awards Show Excellence: Williams chose this iconic saffron Vera Wang gown for the Academy Awards in 2006, where she was nominated for Best Supporting Actress. Her former Dawson's Creek co-star was, of course, right by her side in a sleek black-and-white gown. (Photo by J. Vespa/WireImage)