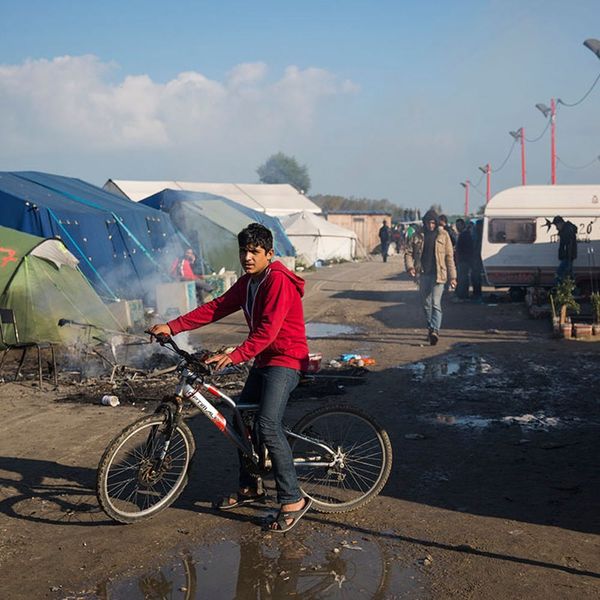 Whether you realize it or not, you’ve probably seen the Calais “Jungle” in the news over the past couple of years. While the French refugee encampment has been around since as early as 1999, it’s become a major symbol of the current refugee crisis. Why? Because over the course of 2016, 10,000+ migrants have been based there.

WHY ARE MIGRANTS IN CALAIS?

Calais has long been a hub for migrants due to its close proximity to the UK. It’s a port city, so there are large trucks and ferries leaving the city regularly, which poses a sense of optimism amongst migrants hoping to cross the English Channel, enter the UK and seek asylum. In the UK, even if you enter illegally, once you’ve entered and applied for asylum you’re no longer considered an illegal immigrant.

As the current refugee crisis became more and more severe, occurrences of migrants storming ferries, hiding in semi-trucks and hopping the border en masse became increasingly frequent and violent. According to the BBC, there were 39,000 attempts to cross the Channel illegally in 2014 and 2015. Additionally, the Eurotunnel (which provides transport from France to England) has reported 37,000 attempts since January of 2015.

FIRST TALK OF DEMOLITION + WHY

As mentioned above, the overcrowding and massive influx of people residing in the camp are creating problems for both France’s border patrol and the surrounding area’s residents. This past spring, the French government gave the go-ahead to tear down the southern half of the camp, with the exception of social spaces, schools and places of worship. The goal was to help facilitate a decrease in number, but their efforts weren’t successful. The “Jungle’s” population still increased. 7,000 residents were reported to be living there in August.

In September, French President François Hollande announced plans to fully dismantle the camp by the end of 2016. Next year is an election year for France, and as migrants are likely to be a major issue, he is thought to have felt pressure to take action. The public was doubtful as promises like this have been made before, but France made good on this statement and began a full demolishment of the camp earlier this week.

On Monday (October 24) French authorities began escorting residents out of the camp. Entrances were closed and a one-way movement was put in place. At the time of the evacuation about 6,500 migrants were estimated to be leaving. Today much of the Jungle is on fire, following clashes between the migrants and police.

Mauricio Lima, a reporter covering the historic moment for the New York Times, writes, “Judging by the crowds on Monday, many of the migrants appeared set to shed their dreams of Britain and were as anxious to be rid of the camp as the government was.” The Calais police commissioner claims the camp will be fully cleared by Friday.

WHERE WILL THEY GO?

The migrants residing in Calais are being dispersed to 140 Welcome and Orientation Centers across France. There they will be housed for up to four months while authorities investigate their cases. After that, those who qualify for asylum will be allowed to stay and those who do not will be deported.

A major concern for the disbursement of the camp is fate of the minors. The exact number of unaccompanied minors residing there varies from report to report, but it’s thought to be upwards of 1,000 children who now need a new place to go. As of now they too are being escorted to centers across the country, but much of their fate remains unknown.