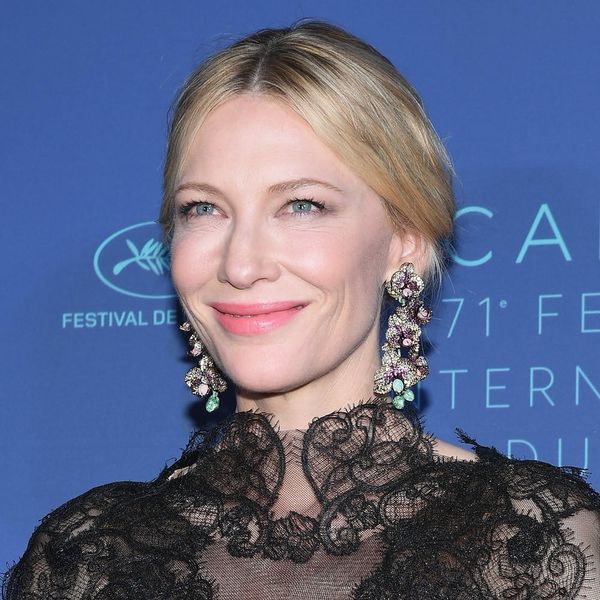 On the heels of the 2018 Met Gala, fashion’s OTHER main event, the Cannes Film Festival, is kicking off with a bang. Everyone from Kristen Stewart and Penelope Cruz to Julianne Moore and Cate Blanchett was on hand to help celebrate the film festival’s kickoff, and while all of the ladies looked undoubtedly gorgeous, it was the Blanchett that had us doing a serious double take.

Blanchett, who is serving as the head of this year’s jury panel, stepped out on the blue carpet for the Cannes Gala dinner in a stunning black lace crinoline Giorgio Armani frock with a nude underlay.

If the look was familiar, that’s because you’ve actually seen it before: the Broadway star wore the very same dress while accepting her 2014 Golden Globe for Blue Jasmine!

While she switched up her hairstyle and changed her jewelry, the look was, by and large, the same.

Rather than being fresh out of things to wear, however, the Ocean’s 8 actress, 48, says her decision to wear the gown again was very much intentional. “From couture to t-shirts, [the] landfill is full of garments that have been unnecessarily discarded,” she told InStyle. “Particularly in today’s climate, it seems willfill and ridiculous that such garments are not cherished and re-worn for a lifetime.”

The move follows similar ones made by stars such as Tiffany Haddish, who recycled the Alexander McQueen gown she wore at the Girls Trip premiere, to host Saturday Night Live, and at the 2018 Oscars, as well as Meghan Markle, who was recently spotted in her first publicly recycled item at an event with Prince Harry.

What do you think of Cate’s recycled look? Sound off over @BritandCo.

Nicole Briese
Nicole is the weekend editor for Brit + Co who loves bringing you all the latest buzz. When she's not busy typing away into the wee hours, you can usually find her canoodling with her fur babies, rooting around in a bookstore, or rocking out at a concert of some sort (Guns N' Roses forever!). Check out all her latest musings and past work at nicolebjean.com.
Celebrities
Red Carpet
Celebrities Celebrity Style Red Carpet