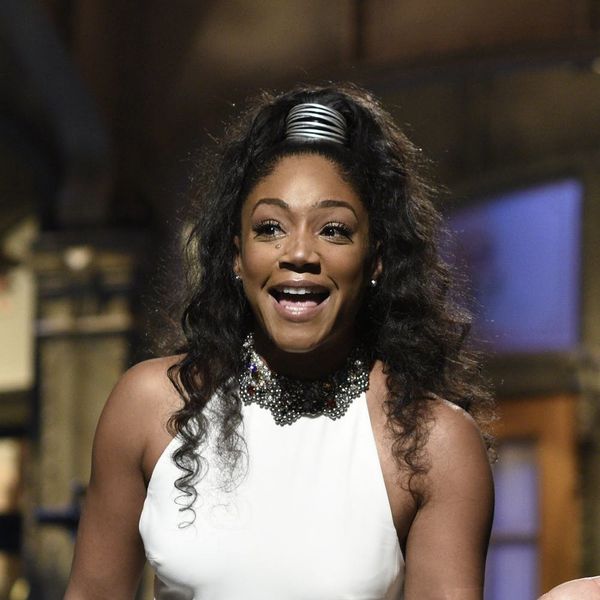 Rita Moreno wasn’t the only one recycling a gown tonight! Tiffany Haddish, who struck a sentimental chord on the red carpet in a frock that paid homage to her Eritrean roots, also showed up onstage at the Dolby Theatre in Los Angeles for the 90th Academy Awards in a dress she’s worn before, not once, but twice!

The Girls Trip star wore the gown for her history-making stint as the first female comic of color to host Saturday Night Live and to her film premiere back in July. We shouldn’t be too surprised to see the actress re-wearing the Alexander McQueen halter dress with a jeweled neckline: She promised us she would indeed be getting as much mileage out of it as she could while making us laugh in her opening monologue on SNL. “That’s what I can’t stand about the internet, cause it’s messing with my fashion game,” she quipped. “I feel like I should be able to wear what I want, when I want, however many times I want, as long as I Febreeze it.”

Case in point? The dress, which Haddish says she paid $4,000 of her own hard-earned dollars for. “I wore it on the red carpet for Girls Trip (above), and my whole team, they told me, ‘Tiffany, you cannot wear that dress on SNL, you already wore it, it’s taboo to wear it twice,’ and I said, ‘I don’t give a dang about no taboo, I spent a lot of money on this dress, this dress costs way more than my mortgage, this an Alexander McQueen, okay? This a $4,000 dress, Imma wear this dress multiple times. Real talk.”

Now, she’s making good on her word, taking to the Oscars stage in the look once more. She managed to breathe new life into it, however, changing her hairstyle and her accessories for a whole new vibe. Tonight, she swapped the half-up ‘do she donned for her hosting gig for a complex bun, leaving long, face-framing bangs out of her updo.

She also ditched her metal armbands and coiled hairpiece for minimal jewelry, leaving the focus on the gown’s built-in bejeweled neck and the UGG slippers she sported for her skit, in which she and Maya Rudolph complained of heel pain.

Recycling a gown at the Oscars: Fab or faux pas? Share with us over @BritandCo.

Nicole Briese
Nicole is the weekend editor for Brit + Co who loves bringing you all the latest buzz. When she's not busy typing away into the wee hours, you can usually find her canoodling with her fur babies, rooting around in a bookstore, or rocking out at a concert of some sort (Guns N' Roses forever!). Check out all her latest musings and past work at nicolebjean.com.
Celebrities
Celeb Style
Celebrities Celebrity Style Dresses Oscars TV
More From Celeb Style