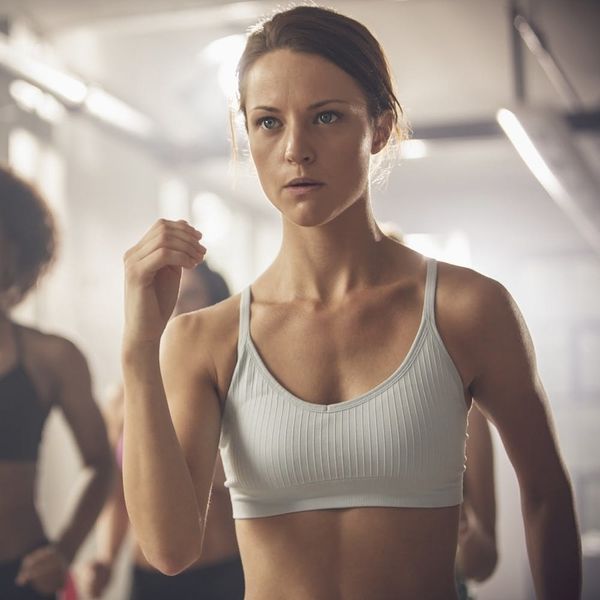 Our fave Kardashian’s new show, Revenge Body, has been taking a lot of heat for not being body-positive. Here’s the deal: Since Khloe knows firsthand how much a breakup can affect a girl, the show’s trainers work with participants to make healthy changes in their diet and exercise routine to help them get over their heartbreak. While we’re all for getting fit, focusing solely on physical changes is probably (umm… definitely) NOT the best way to empower women. On the other hand, feeling strong and eating healthy do make a huge difference to our moods, so we still totally appreciate Khloe’s commitment to her fitness routine.

Criticism aside, we hope Khloe’s new show will give participants some major confidence. So we talked to Corey Calliet, one of the featured trainers on the new show. He’s sharing the five steps you need to take to tone up your body and gain confidence.

1. Set a goal — and we don’t mean goal weight. It might seem obvious, but Corey says that first things first: You have to set a goal. “You have to think of the ideal shape you want to create with your workouts,” he says. Notice he didn’t say “number” there. Nope, we’re only talking healthy habits here, whether you want to focus on strengthening your core or toning up overall.

2. Make a plan specific to YOU. “Next, you have to come up with a realistic, healthy plan,” says Corey. He goes on to explain that every plan isn’t good for everybody, but no matter what your plan is, it has to include working out and eating right. When you’re mapping out your plan, account for your current lifestyle and schedule in order to make staying with your new routine easier.

3. Get *super* organized. When you’re developing a plan that’ll get you to your goal, Corey says to make it as detailed as possible. “You have to be disciplined to get the best results,” he says. “For example, start preparing your meals ahead of time (and planning when you’ll meal prep) and create a gym schedule that you can hold yourself accountable to.”

4. Stay consistent. People may say that starting is the hardest part, but we would beg to differ. I mean, have you seen what the gym looks like in January vs. February? “Don’t give up or hold back — you can’t reach your goals without being consistent,” says Corey.

5. Give each workout 100 percent. Once you have a plan in place, it can be easy to get a bit lax on the routine. But Corey cautions against it. “Don’t go to the gym to cheat,” says Corey. “You’re wasting time and only cheating yourself. If you don’t give it your all, you’ll never get the body you want.”

Do you have thoughts on Khloe’s new show? Tweet us what you think @BritandCo!

Kelsey Nelson
Kelsey Nelson is a born-and-raised Ohioan living life in South Carolina. She thrives at binge watching Netflix, contemplating what to order at the bar and running any trail or road she can get her feet on. In addition to being a Brit + Co contributor, she writes about southern pleasantries, DIY mishaps and more at North Living South. If she isn’t writing or running, she’s off adventuring with her husband Brad and their Lab/Dachshund mix, Gordy.
Fitness
Health
Fitness Kardashians Workouts
More From Health