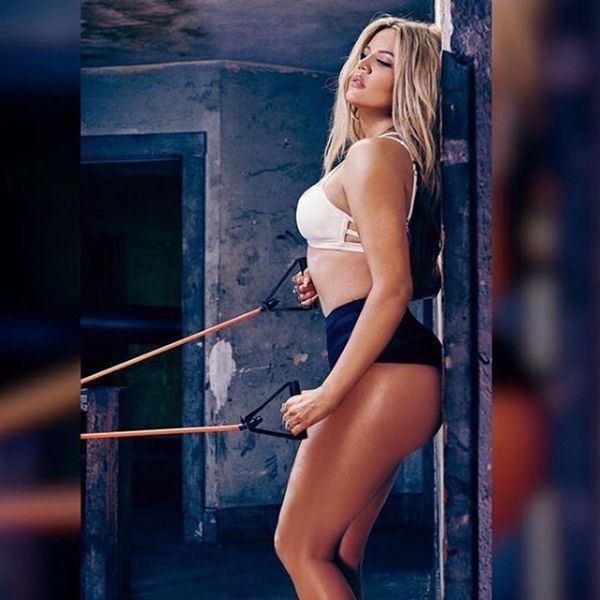 Khloé Kardashian may have once been known as the “fat sister” (in her own words), but nowadays she’s all about healthy eating, a kicka$$ fitness routine and a fierce AF bod. Wanting to use her own experiences to help others achieve their physical goals, she’s launching the new show Revenge Body on E! And as the latest series from the uber-famous family is set to hit screens, it’s already being called out for NOT being body positive. Ouch.

If this isn’t inspiring a New Year’s resolution, we don’t know what will. #RevengeBody

“Whether (someone’s) been dumped, lost their job, or are facing some of life’s toughest challenges, Khloé will help motivate them to seek the ultimate revenge by receiving a true and total makeover,” E! reported when the show was first hyped.

And while living well surely is the best revenge, experts aren’t so sure what Khloé’s doing is the right way to go about the sitch.

While Khloé claims the ultimate aim of the show is to love yourself more and achieve a healthy lifestyle, those in the body biz aren’t so sure. Frankly, the show is called Revenge Body, so right there it’s saying the goal is to get back at someone. That’s backed up by the promo, which reveals participants are hoping to get “revenge” on everyone who’s wronged them, from their ex to their father.

Dietician and health and body positivity coach at Nourish Nutrition Rebecca Clyde explained via Facebook, “The idea to package a 100% appearance based program in a pretty and body positive bow is horrifying. Getting back at your ex with a ‘revenge body’ is not empowering, nor is it body positive. It can’t be, it is the antithesis.”

And according to Elite Daily, Ary Nunez, who trains celebs like Rihanna and Alicia Keys, predicts the contestants’ weight will return unless there is a mental health aspect to the show’s program.

If we looked like Koko, we would definitely be taking selfies between sets too. #RevengeBody

Though Lacey Stone, a trainer who appears on the series, says the title is just that: merely the title. She told FOX411, “Yes, the title is revenge, but it’s not about that. This is a transformation show… and it makes me upset that people who don’t know what the show is about have these opinions. There’s someone in every one of these people’s lives who told them they’re not enough. That’s what this show is about.” So perhaps not quite revenge, but LOOK AT ME NOW! I’M AWESOME EVEN THOUGH YOU TRIED TO SAY I’M NOT.

Check out the show when it premieres January 12 on E! and decide for yourself if Khloé’s revenge plan is body-positive or body-negative.

What do you think about using revenge as a motivation for getting fit? Tweet us @BritandCo!

Desiree O
Desirée O is a ‘Professional Bohemian’ who loves anything and everything related to the arts, entertainment, and pop culture. She ADORES being a ‘Newsy’ for Brit + Co, covering all of the latest tidbits of awesomeness that you want to read about. When she’s not writing, she’s either making messy art, going on long adventurous walks with her camera, or poking around over at bohemianizm (http://www.bohemianizm.com/). You can find out about Desirée O and her work at http://DesireeO.com/ or follow her on Twitter @DesireeO.
Body Positive
Pop Culture
Body Positive Kardashians
More From Pop Culture