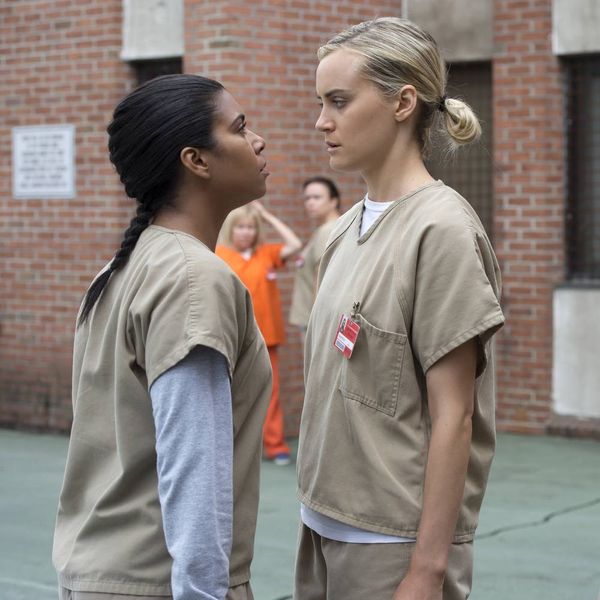 Is there anything better than a summer weekend? We think not. If you’re looking for something to help you relax from a high-intensity week prior, may we suggest a movie marathon? Grab a bowl of popcorn, plop on the couch and choose from these 10 shows and movies worth checking out this weekend.

1. Orange Is the New Black: IT’S BACK! IT’S BACK! Season four of possibly-the-most-talked-about Netflix show lands today, and we’re going to spend all weekend zooming through it. The new season looks like it’s gonna be chock full of new prisoners, trouble for Piper and the return of Alex. We’ll talk more on Monday. (Photo via Netflix)

2. Married: We all know married life isn’t easy. But this FX comedy is out to prove that there can be humor in married misery. Watch it for very, very funny appearances from Jenny Slate, hilarious gags and relatable moments — even for singles. (Photo via FX)

FILMS THAT HIT YOUR FUNNY BONE

3. Whiskey Tango Foxtrot: Give us Tina Fey and we’re on board, no questions asked. Luckily, her movie — also starring Margot Robbie, Martin Freeman and Alfred Molina — is full of plenty of the dry humor Fey is famous for. (Photo via Paramount)

4. Ghostbusters: Celebrate the imminent release of the all-woman Ghostbusters with a re-watch of the 1984 original. Do we even have to say it? You know who you’re going to call. (Photo via Columbia Pictures)

TV SHOWS THAT ARE RIPE FOR BINGE-ING

5. Grey’s Anatomy: Find your person and celebrate all 12 seasons of Grey’s Anatomy, now that it’s finally available on Netflix. Relive the drama, unwarranted deaths and Doctor McDreamy-ness with a weekend-long binge. (Photo via ABC)

6. 30 for 30: OJ Made in America: OJ Simpson has been everywhere on TV lately. The newest appearance is in the epic seven-part documentary from ESPN. This all-encompassing series follows Simpson from his childhood to murder trial and is a fascinating, in-depth look at the man behind the media circus. (Photo via ESPN Films)

7. The Giver: There are several reasons to watch The Giver. You could watch it because you read the book or maybe because you like dystopian story lines. The reason we’re watching it? Meryl Streep. She (as always) gives a powerful performance as the Chief Elder, along with other members of the star-studded cast: Jeff Bridges, Katie Holmes and Taylor Swift. (Photo via ASIS Productions)

8. Heartburn: Throw it back to old school Meryl Streep when she played Rachel (a fictionalized version of Nora Ephron) opposite Jack Nicholson. The very funny, heart-breaking film about a messy public divorce is equal parts sentimental, fury-driven and hysterical. (Photo via Paramount)

MOVIES THAT PROVE WHAT HAPPENS IN EUROPE…

9. Midnight in Paris: One of our personal favorite movies of all time just landed on Hulu. Owen Wilson stars as a man visiting Paris, who is magically transported back to the 1920s every night at midnight. The movie is charming, surreal and will make you want to get on the next plane to Paris. (Photo via Sony Pictures)

10. Remember: Christopher Plummer (Captain Von Trapp from The Sound of Music) stars as an Auschwitz survivor who goes on a rampage to avenge his family’s deaths. The movie is a powerful thriller and reminder that the pain of the Holocaust still lingers. (Photo via A24)