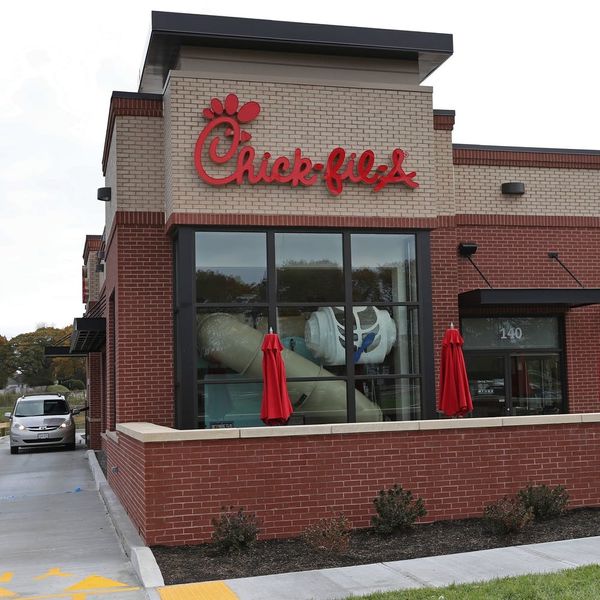 Georgia-based fast food chain Chick-fil-A is under scrutiny, once again, over its financial support of anti-LGBTQ+ groups. Newly-surfaced documents show that the company continued making monetary donations to several such organizations, even after promising it wouldn’t.

ThinkProgress reported Tuesday that 2017 tax information for the chain’s charitable Chick-fil-A Foundation reveals that the fast food giant donated $1.8 million dollars to three groups with anti-LGBTQ+ messaging in their mandates. Donations were issued to the Fellowship of Christian Athletes, the Paul Anderson Youth Home, and the Salvation Army to the tune of $1,653,416, $6,000 and $150,000, respectively.

The Fellowship of Christian Athletes, according to Vox, requires employees to refrain from “homosexual acts,” while the Paul Anderson Youth Home, a Christian “residential home” for boys, teaches the young people in its care that same-sex marriage is “a rage against Jesus Christ and His values.” The Salvation Army has a long and very public record of anti-LGBTQ+ discrimination, which the organization has made efforts to downplay in recent years.

In 2012, Chick-fil-A CEO Dan Cathy stated that marriage equality would “invit[e] God’s judgement on our nation when we shake our fist at him and we say we know better than you as to what constitutes a marriage.” Cathy’s remarks brought attention to the restaurant’s history of anti-LGBTQ+ charitable donations, and launched a widespread national boycott of Chick-fil-A that continues today.

In 2013, Chick-fil-A pledged on its Facebook page that it would “leave the policy debate over same-sex marriage to the government and political arena,” ThinkProgress reports. But, even as the company worked to overhaul its bigoted image, it continued making donations to anti-LGBTQ+ groups.

A spokesperson for Chick-fil-A told ThinkProgress this week that the company would no longer be donating to the Paul Anderson Youth home moving forward. “In 2017, a decision was made by the Chick-fil-A Foundation to no longer donate to the group after a blog post from 2010 surfaced that does not meet Chick-fil-A’s commitment to creating a welcoming environment to all,” said the company rep.

As for other donations, the spokesperson stated that Chick-fil-A was only supporting those groups’ summer sports camps and other youth initiatives.

“We have never donated with the purpose of supporting a social or political agenda. There are 140,000 people — black, white; gay, straight; Christian, non-Christian — who represent Chick-fil-A,” the company told ThinkProgress. “We are the sum of many experiences, but what we all have in common is a commitment to providing great food, genuine hospitality, and a welcoming environment to all of our guests.”

Not everyone is buying it. On Thursday, following the report from ThinkProgress, the city of San Antonio, Texas voted to ban Chick-fil-A from opening a new location in the San Antonio airport.

“San Antonio is a city full of compassion,” explained San Antonio Councilman Roberto C. Treviño in a statement, “and we don’t have room in our public facilities for a business with a legacy of anti-LGBTQ behavior.”

Kat Armstrong
Kat has been a writer, social media maven and mom for longer than she's willing to admit. She's also spent time in front of and behind the camera, interviewing celebs, politicians and acting as a producer for fashion and artistic photography shoots. When she isn't writing for various orgs and publications, she's hanging with her kids, husband and French Bulldog, Peter, in Toronto, Canada.
Controversy
Gender Issues
Controversy Fast Food LGBTQ
More From Gender Issues