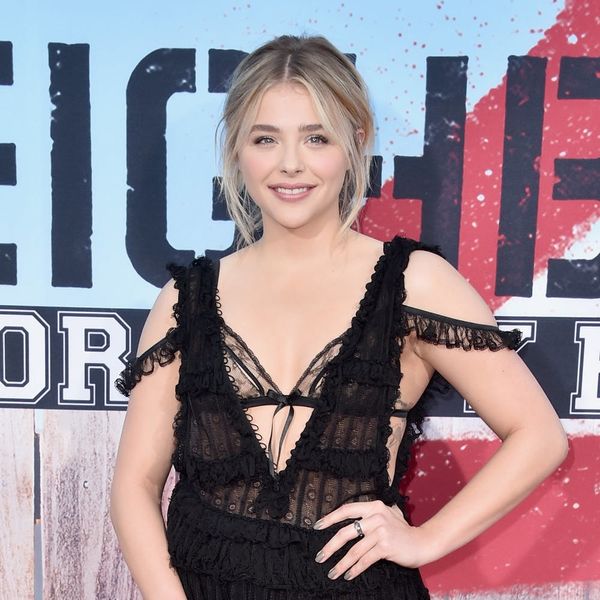 Chloe Grace Moretz has the public swooning over her relationship with Brooklyn Beckham lately and riveted by her red carpet confessions. Now the actress is back in the headlines — this time with some brand new ink. Not only are her tattoos totally sentimental, but they’re also super hard to spot. One of them is almost impossible to see. Is this real life or a Magic Eye illusion?

Heading to New York City’s Greenwich Village for her new body art, Chloe stopped in at West 4 Tattoo to get her pieces done by artist Jon Boy. He in turn posted pics of the 19-year-old celeb on his Instagram account, giving us a peek at the Neighbors 2: Sorority Rising star’s new ink.

The first tattoo that Chloe had added to her bod is the easier to see of the two, which may be hard to believe when you see its teeny size and out-of-the-way placement on her mid-back, just under her bra line. With the cursive text saying “Janette Duke,” it appears to be a lovely (if tiny) tribute to the actress’ grandmother.

Now get ready for a game of spot the ink. Chloe’s next piece is two tiny letters, CK (initials? code?). Done on her ankle in white ink, the text is barely visible. Okay, so maybe it’s kinda totally invisible to some. Can you spot it?

Chloe then turned the tables and snapped on some latex gloves to try out some tattooing of her own, inking the artist’s arm. Posting the pic of the actress at work, Jon Boy added the caption, “Pro.” Maybe Chloe has a second career in the making.

Do you have or would you get a white ink tattoo? Tweet us @BritandCo!

Desiree O
Desirée O is a ‘Professional Bohemian’ who loves anything and everything related to the arts, entertainment, and pop culture. She ADORES being a ‘Newsy’ for Brit + Co, covering all of the latest tidbits of awesomeness that you want to read about. When she’s not writing, she’s either making messy art, going on long adventurous walks with her camera, or poking around over at bohemianizm (http://www.bohemianizm.com/). You can find out about Desirée O and her work at http://DesireeO.com/ or follow her on Twitter @DesireeO.
Tattoos
Makeup
Tattoos
More From Makeup