Choosing Not to Vote Is the Ultimate Sign of Privilege 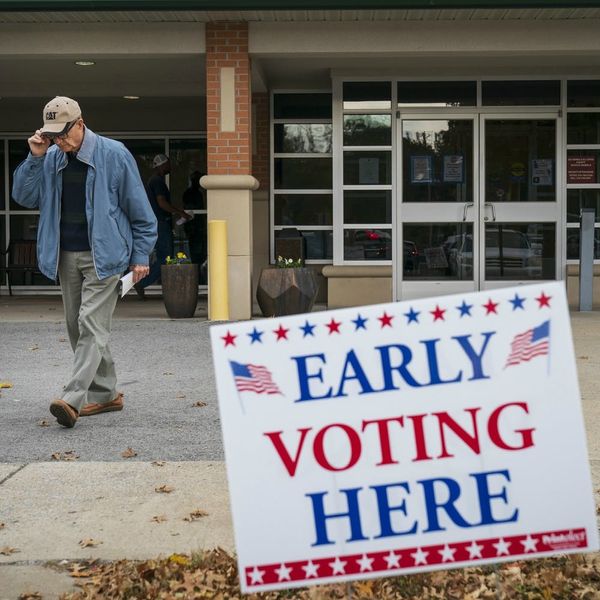 With the midterms less than a week away, some people may still be deciding who to vote for. In Georgia, Oprah Winfrey is campaigning for gubernatorial candidate Stacey Abrams, who may become the US’s first-ever Black woman governor. And Winfrey’s message to voters on Thursday, which included a plea that voters across the country remember their ancestors who didn’t have the ability to vote, was a reminder of how incredibly important it is to exercise that right.

But for those who have decided they don’t want to vote, even with ease of access to polling places and ample opportunities to get there, the choice to ignore an election shows that any extreme negative outcome won’t really affect you — and in a democracy, that’s both the ultimate sign of privilege and the easiest one to change.

Across parts of the US, there have been calls of voter suppression among Black and poor communities, particularly in Georgia, where Abrams is running. Current Georgia Secretary of State Brian Kemp has been accused of using his position to suppress votes and suspending more than 50,000 voters’ applications.

Part of the problem, at least in Georgia, is that Kemp is technically overseeing his own election. During a debate in October, his opponent, Stacey Abrams, pointed out this conflict of interest. “My father was arrested helping people register [during the Civil Rights movement] so I take the right to vote very seriously,” she said. “Under Secretary Kemp, more people have lost the right to vote in the state of Georgia. They’ve been purged, they’ve been suppressed, and they’ve been scared. The reality is, voter suppression is not simply about being told no. It’s about being told it’s going to be hard to cast a ballot…That’s the deeper concern I have.”

But the threats to voter freedom aren’t just happening within one state — they’re happening all over, with threats levied against community organizers for doing their due diligence just to ensure that disenfranchised (and, frequently, racialized) communities have access to their legal right to vote.

In GOP-held areas across the US, and even some Democratic ones, if gerrymandering (the act of redrawing district lines to ensure majority wins) hasn’t produced the results a given party was hoping for, party officials are putting up extreme barriers to voting. In fact, according to the BBC, at least 24 states have introduced legislation that makes it difficult for disenfranchised people to vote.

In Florida, 1.5 million former felons lost their right to vote under current governor and Senate nominee Rick Scott, who reversed a previous decision to grant these former inmates the right to vote.

In North Dakota, a new law demands a residential address on a driver’s license, but the law cut the rights of Indigenous Americans in the state, particularly those who live on reservations — they use PO boxes for mail, as they don’t have traditional residential addresses for their homes.

In Dodge City, Kansas, Republican officials removed the accessible polling place that the Latino-majority community historically voted at in favor of a location outside town without access to public transit. And back in September in North Carolina, the Trump administration issued sweeping subpoenas for state voter records, leaving millions of people in limbo until they retracted the writs.

But it’s not just voter suppression that’s at issue for those of us with the privilege to cast our ballots. Policies that affect racialized, queer, and indigenous communities, as well as low-income Americans, will make life worse for those whose votes have been suppressed and for those whose votes haven’t. In assuming that policies that hurt others won’t eventually trickle down to affecting us, we’re making the arrogant assumption that our position within society makes us untouchable. The truth is that it doesn’t.

Precedents set in harmful immigration policies can trickle into citizenship; queer erasure can lead to further criminalizing of all people; harmful policies that take away food and medical care from poor and disabled people will eventually cause a harmful ripple effect in the way able-bodied and working Americans access their own care.

So while we may think that not voting is an act of rebellion, it actually has the opposite effect — it tells those in power that you surrender, because you don’t particularly care about policies that may or may not touch you or your life.

“For anybody here who has an ancestor that didn’t have the right to vote and you are choosing not to vote,” Winfrey told the crowd at Abrams’ event, “you are dishonoring your family. You are disregarding and disrespecting their legacy, their suffering and their dreams when you don’t vote.“

Kat Armstrong
Kat has been a writer, social media maven and mom for longer than she's willing to admit. She's also spent time in front of and behind the camera, interviewing celebs, politicians and acting as a producer for fashion and artistic photography shoots. When she isn't writing for various orgs and publications, she's hanging with her kids, husband and French Bulldog, Peter, in Toronto, Canada.
Election Day
Politics
Election Day Politics