We’ve Seen Crackdowns on Gender Identity Before, and it Ended Catastrophically 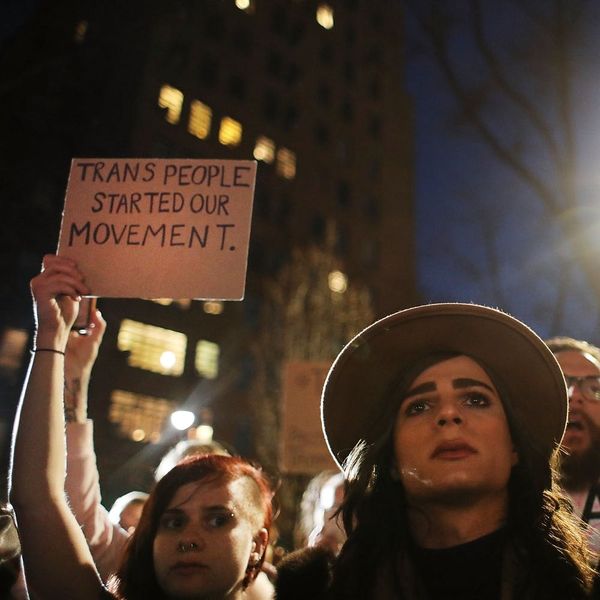 On Saturday, the New York Times published a scary story suggesting that the Trump administration was investigating changing legal wording to narrowly define gender based on the genitals of people as they appear at birth. This apparent plan is, according to the paper, another step toward taking basic human rights away from millions of transgender and gender-nonconforming Americans, effectively killing trans civil rights that were enacted into federal law during the Obama era.

While the Department of Health and Human Services works at setting a narrow definition of gender under Title IX — the federal civil rights law that bans gender discrimination in educational programs that receive federal funding — many transgender Americans and civil rights activists are worried by what the narrowing of the definition may mean for human rights in the country.

The desire to narrowly define a group in an attempt to take away rights for millions of people has happened many times throughout history, which is why this legalized attempt at discrimination comes as a bleak but familiar warning. Without studying and understanding the historical implications of narrowing human rights, we’re doomed to repeat the same mistakes over and over again, even in 2018.

In an essay on the importance of studying history, PhD candidate Martin van Doorn explains that even though we may think that the study of history means learning dates and facts, it’s the bigger picture that is important. “History is not just about which battle took place on what day,” he writes. “On top of what happened, it also seeks to understand why these events unfolded as they did. On top of collecting historical data, it involves explaining the past.”

But people often see the study of history overall as the rote memorization of dates and facts, and not in the social construct of exactly how events shaped human history — which is why we keep coming back to the same themes over and over again. Throughout our past, efforts to erase or undermine the legitimacy of gender-variant identities have been history-defining, but maybe not how you’d think.

When colonizers first arrived in the Americas, two-spirit and transgender indigenous people were summarily persecuted in the process of forced assimilation, violence, and demonization of Indigenous cultures. In taking over in India and other South East Asian countries, European colonizers outlawed the rights of transgender and queer people, sending trans and queer people like India’s Hijra into hiding or into the legal system as part of England’s Criminal Tribals act. And in Nazi Germany, trans and queer people who had gained cultural visibility in what is regarded as the first modern gay rights movement were swiftly sniffed out; the Nazis outlawed queerness, making gender and sexual nonconformity punishable by death.

Indigenous people throughout the world still suffer the social, physical, and emotional burden that colonization has done to them; in Southeast Asia, transgender people are often ostracized by the community and targeted by police. And after the queer purges led by Nazis in the early 1930s, it took decades before gay rights activists had the ability to mobilize in the same way that they had pre-war.

But there is hope: As the Center for Transgender Equality points out, there are several legal precedents that state that Title IX as well as the Fair Housing Act, the Equal Credit Opportunity Act, and Section 1557 of the Affordable Care Act all cover the civil rights of transgender Americans, not just cisgender ones.

So while Health and Human Services tries to get the departments of Education, Justice, and Labor on board with their narrowing definition of gender, it’s probably only a matter of time before other rights are removed for citizens. Remember that your voice counts and we have a midterm election coming up in two weeks: So get out there and vote for people whose views align with yours.

Kat Armstrong
Kat has been a writer, social media maven and mom for longer than she's willing to admit. She's also spent time in front of and behind the camera, interviewing celebs, politicians and acting as a producer for fashion and artistic photography shoots. When she isn't writing for various orgs and publications, she's hanging with her kids, husband and French Bulldog, Peter, in Toronto, Canada.
LGBTQ
Gender Issues
LGBTQ Politics
More From Gender Issues