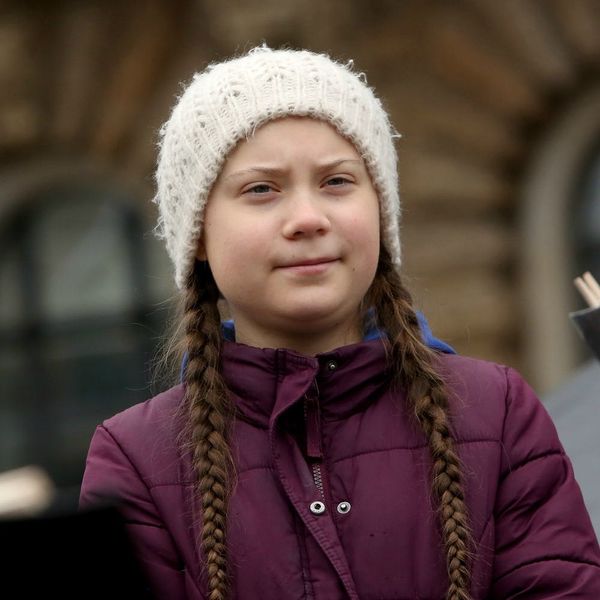 Last Friday, students around the world marched out of school and took to the streets to protest a lack of political action on climate change. Leading the way was 16-year-old Greta Thunberg of Sweden, who kicked off the global strikes to force politicians to take climate change seriously. When she was still 15, the teen decided to camp outside of her country’s parliament in protest for what she called out as a lack of work on the Paris climate agreement.

But beyond the teen activist’s globally inspiring challenge to push politicians to fight climate change, her diagnosis of Asperger’s is also challenging public perceptions of what it looks like to be on the autism spectrum.

“They were always talking about how we should turn off lights, save water, not throw out food,” she said in the same interview. “I asked why and they explained about climate change. And I thought this was very strange. If humans could really change the climate, everyone would be talking about it and people wouldn’t be talking about anything else. But this wasn’t happening.”

Her ability to dedicate prolonged focus to learning about things like climate change, she says, is due to her Asperger’s, and not in spite of it. “I can do the same thing for hours,” she’s quoted as saying in the New Yorker. And that passion has resulted in a nomination for the Nobel peace prize.

During a TEDTalk last year, the teen explained how her diagnosis changed how she looked at herself, and gave her a greater understanding of why she felt so strongly about climate change.

“I stopped talking. I stopped eating,” she said of the two years that she began learning about climate change, and made the issue her all-consuming focus.

“In two months, I lost about ten kilos of weight. Later on I was diagnosed with Asperger’s Syndrome, OCD, and selective mutism—that basically means I only speak when I think it’s necessary,” she paused, adding, “now is one of those moments.”

Thunberg also explained to the audience that for her — as for many others on the spectrum — life is very black and white. This makes it difficult to overlook the urgency of climate change, or to seek reassurance in what is still unknown about its implications. Thunberg also has a difficult time sugarcoating the way she views the world, which has kept her from mincing words about the drastic measures we need to take, today, in order to make lasting environmental change.

“I think in many ways we autistic are the normal ones and the rest of the people are pretty strange,” she said to a crowd in London last Halloween. “Especially when it comes to the sustainability crisis.”

Kat Armstrong
Kat has been a writer, social media maven and mom for longer than she's willing to admit. She's also spent time in front of and behind the camera, interviewing celebs, politicians and acting as a producer for fashion and artistic photography shoots. When she isn't writing for various orgs and publications, she's hanging with her kids, husband and French Bulldog, Peter, in Toronto, Canada.
Activism
Empowerment
Activism Empowering Girls Environment Inclusivity
More From Empowerment