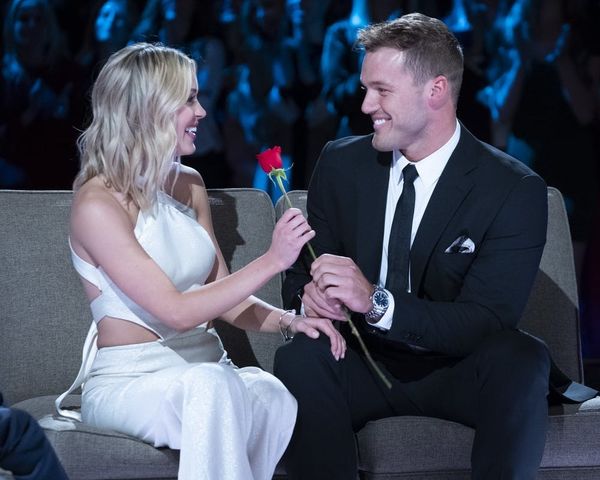 Season 23 of The Bachelor ended on a happy note on Tuesday night, with Colton Underwood and Cassie Randolph reuniting following a dramatic split in the March 4 episode. After the finale — during which they told Chris Harrison they’re “super in love” now, four months after filming — they headed to Jimmy Kimmel Live!, where they opened up about their unconventional (for The Bachelor) road to happily-ever-after.

The couple told Kimmel they are “confidently boyfriend and girlfriend,” and while they’re not yet living together or engaged, they’ve spent more time together since the show ended than any previous Bachelor couple. Underwood even moved from Denver to Los Angeles to be closer to Randolph. And, yes, they do plan to get engaged eventually.

“I think you’re the only couple in the history of this show to handle this like human beings,” Kimmel told the smiling pair. “It is preposterous to get engaged at the end of this period. It’s a recipe for disaster.”

Nonetheless, the talk show host gifted Underwood a Neil Lane engagement ring for future use, even inviting the lovebirds to get engaged on his show when they decide to take that step.

In a separate interview with People, Randolph opened up about why she changed her mind after initially breaking up with Underwood in Portugal. At the time, she said she wasn’t sure if she was in love with him, or if she was ready for marriage.

As viewers saw on the Bachelor finale on Tuesday, March 12, Randolph was surprised to see Underwood show up at her door after breaking up with the remaining two contestants, Tayshia Adams and Hannah Godwin. But she told People that Underwood knew she needed to take things slowly and has not put any pressure on her in the meantime.

Their families have come around to the relationship, too. The couple told Kimmel that they reconciled the awkwardness with their parents and have even watched the show with Randolph’s family — which, yes, includes a lot of discussion about Underwood’s virginity.

“I’m confident in all the decisions I’ve made,” Underwood told Kimmel. “It’s led me here, it’s led me to her. I’m so happy and so in love right now.”

Nicole Villeneuve
Nicole is an entertainment and lifestyle writer covering pop culture, news, and cool women doing cool things. She likes yard sales, MTV's Teen Mom, and putting too many memes in the group chat. She lives in Toronto.
The Bachelor
TV
The Bachelor
More From TV