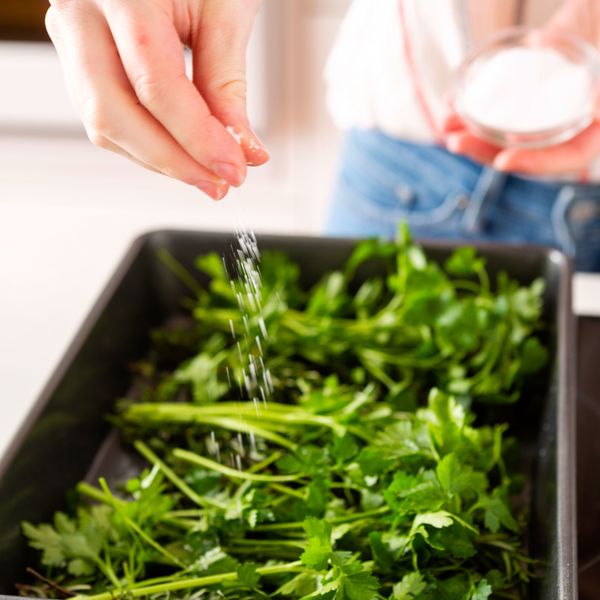 Rachael Ray has a way of making the experience of whipping up an amazing meal seem super easy, from her famous 30-Minute Meals to ones that can take as many as three days to prepare.

In the latest Teach Me Something New! podcast, Brit Morin and Anjelika Temple chat with Ray about her show, her mad crush for 50 Cent and all the cooking secrets that make her recipes SO good. Tune in and get ready to get cooking with these nuggets.

1. Have the right tools for how you eat. You don't have to have a fully stocked kitchen to make a great meal but having just the right pot or pan for the type of food you often eat will make a difference. "If you're a meat and potatoes person, you have to have a cast iron grill or a cast iron skillet, period," says Ray. Fellow Mediterranean and pasta lovers should have a quart pot handy as well as a big colander, "not a little tiny strainer," she says. "If you're keto or pescatarian, you're going to want to have a nonstick, a stainless, and a cast iron. You're going to want a variety of skillets in your life depending on what type of protein you're cooking." An always-sharp, forged knife is key to good (and safe) cooking too.

2. Shop according to unit price. "You never buy food by the price on the tag or the shelf talker," says Ray. Instead, buy in bulk when you can and always look at the price you're paying by weight (even when you shop online) for spices, cheeses, protein and vegetables. "I don't think you should ever live any other way no matter how much money you make because you're wasting food, you're wasting time, and you're wasting money by a lot," says Ray.

3. Don't salt the water before it boils. "You always salt water after you boil it," says Ray. The reason? "When you put salt into cold water, it drops to the bottom, it will break down but it can also scar your pots." says Ray. She also says it's essential to keep half a mug or three quarters of a cup of salty water right before you drain your pasta. "It's what marries the pasta to the sauce and always undercook your pasta by at least one minute because it continues to cook while you're marrying the pasta to the sauce," adds Ray.

4. Stock your freezer with extras. "There is literally very little in the world that you can't process and freeze," says Ray. So double up on meals your family loves (sauces, soups, chili, marinara, meatballs and other proteins). Make single portions of whatever you're cooking so it's easier to defrost and cool to room temperature before storing. "Put it in plastic food storage bags, never put it in those big cumbersome things, make sure that the package says, Freezer Bags," says Ray.

5. Store mushrooms in paper sacks. Don't leave mushrooms stored in plastic produce bags, says Ray. Who knew? "Mushrooms belong in paper sacks, exposed to the air so that those little fungi keep their flavor and don't get slimy."

6. Have a few homemade sauces on hand for last-minute meals. Ray's go-to for a quick-and-yummy sauce? A puttanesca, a spicy, red tomato sauce with capers and oil and cured olives. "You melt anchovies into garlicky oil with chilis and you add canned tomatoes," says Ray. "I have everything in the cupboard to make a variety of different seafood pasta dishes. I always have eggs, most people have bacon, you can make carbonara."

7. Give butter a flavor boost. You can make literally anything better with herbed compound butter, says Ray. Experiment with flavors, add capers, Dijon and a splash of Worcestershire and lemon zest and a splash of lemon juice and dill, parsley, chives. "You put all of that into the butter, mix it up, and then you roll it in parchment and keep them in the freezer," she adds. Have different butters ready to add to any protein, any grilled vegetable... "You could put it on anything and it takes it to the next level," says Ray.

8. Let kids eat what you eat. Picky eaters are made, not born. "If you give a child exactly what you're eating for dinner, which is all my mom ever did, they'll eat or they won't eat and I guarantee you they're not going to starve themselves," says Ray. It's all about exposing the child to different types of foods and not just once. "You have to go a minimum of six times and some doctors say 20 times before a child knows if he or she really likes or dislikes it," says Ray. Make food a family affair too. Bring them in the kitchen with you, ask them what colors of food they want from the produce section, let them mimic you with a plastic or wood knife. "Let children see the fun and the beauty of being able to be self-sufficient and to provide for yourself and the people that you care about," says Ray.

Tune in to Brit + Co's Teach Me Something New podcast for more essential cooking basics from Rachael Ray!