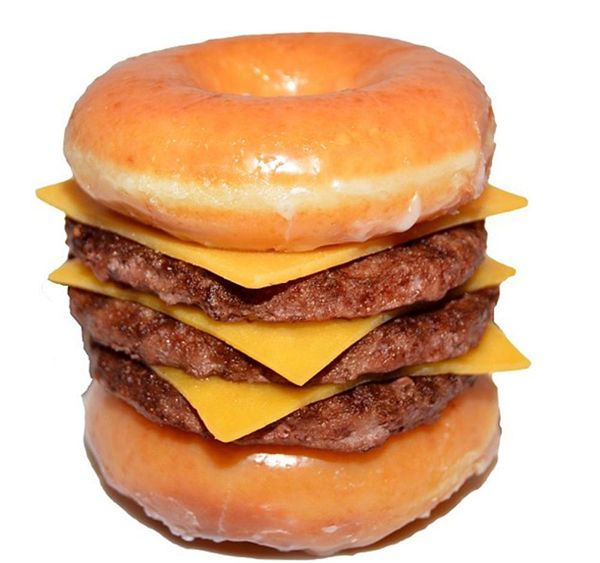 Today is National Hamburger Day and we’re using that as a great reason to celebrate with a bucket list of 11 burgers you need to chomp down on in your lifetime. The hamburger completely deserves its own holiday; the All-American dish was conjured up in the 19th and 20th century and these days, has become an icon for American culture worldwide.

1. Ramen Burger: The ramen burger spun into national consciousness thanks to the efforts of chef Keizo Shimamoto. The bun of choice is made from dried ramen noodle packets, and in between is a beef patty with shoyu glaze, scallions and arugula. What started off as a pop-up now has a full-blown brick-and-mortar in the heart of Koreatown, Los Angeles. (Photo via @ramenburger)

2. Sushi Burger: There’s an entire restaurant in Melbourne called The Sushi Burger, slinging out chunks of marinated protein like pork and salmon in between two fat buns of compressed rice. True to a traditional hamburger’s composition, pieces of green lettuce are put in for texture. (Photo via The Sushi Burger)

3. PB&J Burger: Most people don’t think of peanut butter, jelly and meat in the same sentence, but West Egg Cafe in Atlanta has made it happen in a glorious burger oozing with pimiento cheese. There’s a slab of bacon inside for an extra crunch and the jam of choice is tomato. (Photo via Zagat)

4. Krispy Kreme Burger: Also known as the Luther Burger (named after singer Luther Vandross, who loved this dish), this is a sugary mutation of a hamburger. Donuts are used instead of buns like in this version from Cali’s Chicken Charlie’s and often you’ll find cheddar cheese and strips of chocolate-covered bacon sandwiched in the middle. (Photo via Chicken Charlie’s)

5. The OG Burger: Fun fact: the first burger ever was actually invented in China. Called rou jia mo, it dates back to the Qin Dynasty and is made with a flaky leavened flatbread and stuffed with stewed, spiced meat. You can find this gem in parts of Northern China or at the Shaanxi-style eateries in Los Angeles or New York. (via Curried Cantaloupe)

6. Caviar + Lobster-Topped Burger: Here’s something for the fancy/crazy folks who would drop $666 for meat between buns. The unfortunately named Douche Burger was crafted by New York’s 666 Burger food truck who created a pricey bun that’s filled with foie gras-stuffed Kobe covered in Gruyere cheese that’s been melted with champagne steam. It’s topped with lobster, truffles, caviar and a BBQ sauce made with Kopi Luwak coffee beans (pooped out by some sort of animal called the Asian palm civet). The owners said in a Bloomberg interview that while the product is real, it was meant as a joke. Apparently only one person bought it. (Photo via Bloomberg)

7. Le Burger Extravagant: While the latter may have been a publicity stunt, this burger seems like an earnest attempt to woo the big spenders. Enter Serendipity 3‘s Le Burger Extravagant — a whopper of a burger that totals up to $295 and once held the Guinness World Record for most expensive burger. The beef is Japanese Wagyu, infused with white truffle butter, and topped with James Montgomery cheddar cheese, black truffles and a fried quail egg. It is served on a gold-dusted campagna roll spread with white truffle butter, and the bun is topped with a blini, creme fraiche and caviar. If you want dessert, you can finish off with their $1,000,000 sundae. Talk about decadent.

8. Ice Cream Cheeseburger: Speaking of dessert, this gem was discovered at the Florida State Fair. What it is: a fat cheeseburger topped with onions, lettuce, pickles, tomatoes and a giant scoop of fried ice cream. We’re not sure what will come first: the heart attack or the brain freeze. (Photo via CNN)

9. Octuple Bypass Burger: How would you like your burger with 40 bacon slices? Las Vegas’ Heart Attack Grill is famous for their literal heart-attack-inducing creations. “I’m probably the only restaurateur in the entire world who is unapologetically telling you that my food is bad for you, that it will kill you, and you should stay away from it,” owner Joe Basso once told Bloomberg. (Photo via Business Insider)

10. Absolutely Ridiculous Burger: On the theme of ridiculously large burgers, meet the king of big burgers: the Absolutely Ridiculous Burger. Made by Mallie’s Sports Bar in Southgate, Michigan, it won the world record for the largest commercially available burger. The hamburger weighs in at 338-pounds and it’s a 3-foot-tall, 540,000-calorie edible monster that has 36 pounds of cheese, 30 pounds of bacon, 15 pounds of lettuce and 30 pounds of tomato. It’s selling for $5 a pound. Godspeed. (Photo via Geyser of Awesome)

BONUS: Shake Shack’s Pulp Burger: Need a little detox after all that beef? Try Shake Shack’s limited edition Juice Pulp Cheeseburger. Everything inside this burger would otherwise have been composted or chucked. Bet you’ll never have a veggie burger like that in your lifetime. (Photo via @shakeshack)

What’s the craziest burger you’ve ever made or eaten? Share below!

Clarissa Wei
Clarissa Wei is a Los Angeles-based writer who knows a lot about Asian food and the hidden gems of her city. She lives in the San Gabriel Valley, and you can find her making dumplings from scratch or hiking the local mountains.
Recipes
The Conversation
Reviews:
More From Recipes