20 of the Most Creative Elf on the Shelf Ideas 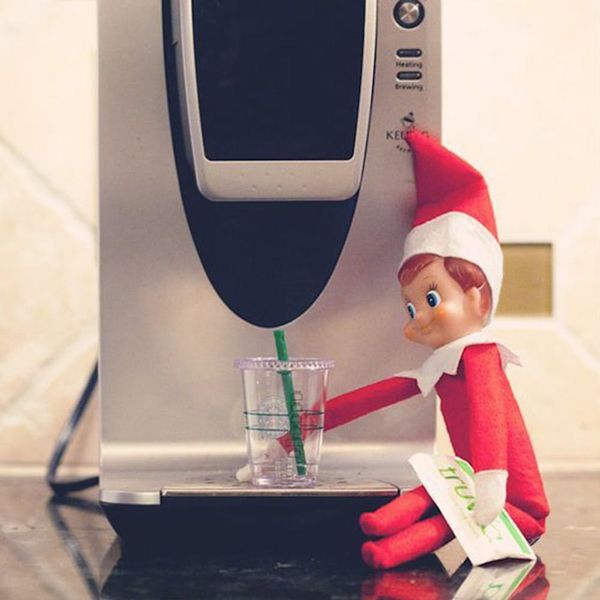 It’s that time of year when we come together to make sweet treats, mix up cocktails, shop ’til we drop, and give gifts (after wrapping them uber creatively, of course). A new holiday pastime that we’ve spotted growing on Pinterest over the last couple years is Elf on the Shelf. Who cares if you don’t have kids? Adults can get in on the fun too (don’t forget — #iamcreative!). You’ve got a few weeks to go before Elf on the Shelf becomes Elf Stuffed Away in a Box, so get inspired with these creative, oft-hilarious poses your kids, roomies, or boo will be LOLing at this month.

Like we always say, sneakers gonna sneak. Guess that holds true for elves too. (via Rachel Swartley)

Elf on the Shelf, Squared

How very meta. Now pass the pasta and maple syrup. (via Living Locurto)

3. Runaway Elf: Trying to find a shelf in a new house now? (via Rachel Swartley)

Does anyone really enjoy laying in the cold snow making these? Sprinkle substitution FTW. (via Rachel Swartley)

We’re all about photo booth props (and photo booths). So this one is totally at the top of our to-do list. (via Living Locurto)

This has happened at least once to every maker (right…?). Recreate your lowest moment for some LOLs and pick up some gift wrapping tips here. (via A Few Short Cuts)

All that’s missing from this scene is some mistletoe. (via Home Stories A to Z)

Get creative and have your Elf DIY the wrapping paper. (via Rachel Swartley)

Make way for this elf, does he have a license to operate heavy machinery? (via Home Stories A to Z)

It’s a good core workout — you should try it sometime. (via A Small Snippet)

This takes melt in your mouth to a whole new level. (via Home Stories A to Z)

We don’t think the Elf looks like a pink nightmare. (via Anders Ruff)

It’s only fair that your Elf be included in the family photo sitch this holiday season. (via A Small Snippet)

It is a known fact that elves only need 40 minutes of sleep a night. (via Home Stories A to Z)

17. Bound and Gagged: Choo Choo! Not even a prankster is safe from hijinks this time of year. (via Fancy Shanty)

Teacher of the Year

Remind your kids about what’s important this time of year. #squadgoals (via A Small Snippet)

Use that last little bit of batter from brunch to put on a (miniature) feast for your hard-working Elf. (via Home Stories A to Z)

Wishful thinking this time of year, but for someone who lives in the North Pole, this far south is essentially in the tropics. (via A Small Snippet)
Sean Griffis
Christmas
Party
Christmas Holidays