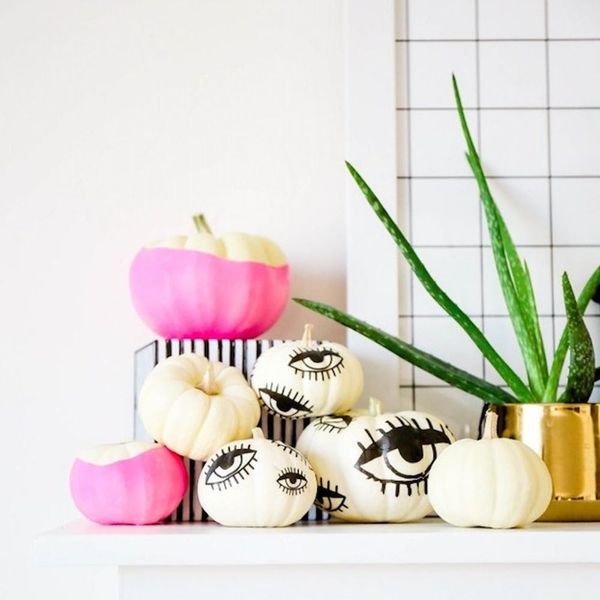 If you love a good Halloween DIY, then you’ll love these pumpkin painting ideas that don’t require any of the cleanup that follows traditional pumpkin carving. This October, brighten up your stoop or doorstep with bold no-carve pumpkin ideas, and those trick-or-treaters won’t know what hit ’em.

1. String Art Pumpkin: String us along anytime for an art project that combines bright fabric, metal, and organic materials. (via Hello, Wonderful)

2. Disco Pumpkin: Disco is not dead so why not make pumpkins that sparkle and shine? (via Pop Shop America)

5. Mosaic Pumpkin: Traditionally made on pathways and tables, mosaics actually work on pumpkins too. Use a craft pumpkin instead of the real thing and it will shine all season long! (via Gina Michele)

6. Tattooed Pumpkin: Use this free template and decorate your ‘kins with winky eyes for the trendiest Halloween decor ever. (via Proper)

8. Watercolor Pumpkin: Go ombre or go color-blocked but go watercolored either way with this chic carving alternative. (via Twinspiration)

9. Turquoise Pumpkin: Rhinestones make everything prettier and we love this DIY teal-painted take on the orange classic. (via Dans Lakehouse)

10. Succulent Pumpkin: Add some greenery to your fall decor-scape with a creative pumpkin planter project. ‘Cuz it doesn’t succ. (via Gold Standard Workshop)

11. Bright Ombre Pumpkin: Let’s be honest — your pumpkin should not miss out on the ombre trend. (via The Daily Quirk)

12. Glitter Pumpkin: A little gold glitter only makes things better. Trust us. (via Nest of Posies)

13. Cactus Pumpkin: Bet not a lot of people would expect to see a cactus pumpkin on your doorstep. These are super simple to DIY and are a major conversation starter. (via Aww, Sam)

14. Galaxy Art Pumpkin: We wish all galaxy nebula looked as pretty as this pumpkin. (via The Swell Designer)

15. Pumpkin Stack: Basically, you’re creating a totem pole of pumpkins, which is awesome. (via Brit + Co)

16. Marbled Pumpkin: The best thing about this marbling technique is that no two pumpkins will be the same. (via Momdot)

17. Ice Cream Cone Pumpkin: This is so clever and cute. Bring some sweetness to your front doorstep! (via Martha Stewart)

18. Gold Leaf Splatter Pumpkin: This design makes it look like a pumpkin was your drop cloth when you were creating a really rad painting. (via Suite One Studio)

19. Beach Ball Pumpkin: Even though October brings chillier weather, hang onto those summer vibes with a cute beach ball pumpkin. (via Paint the Gown Red)

20. Splatterware Pumpkin: The blue and white are not your typical Halloween colors, so this pumpkin is a fresh spin on the typical holiday decor. (via CountryLiving)

21. Hudson Bay Blanket Pumpkin: This pumpkin is classic-meets-cool and would be great decor year-round. (via CountryLiving)

22. Doodled Pumpkin: We love the wooden design, but you can really do anything with a permanent marker and a pumpkin. Add a kitten for extra cuteness. (via Cosmopolitan)

23. Gilded Words Pumpkin: Time to test your handwriting skills! And it’s worth it in the end because the result is SO pretty.

24. Silhouette Pumpkin: Go for an old-school black and white pumpkin. It’s a really cool take on the classic Victorian silhouette.

25. Message on a Pumpkin: Let the pumpkins do the talking for you. (via George Street Photo & Video)

26. Gold Confetti-Dipped Pumpkin: These pumpkins were *meant* to be seen. (via Studio DIY)

27. Gold Leaf Patterned Pumpkin: Yes, you can add a chic touch to your decor with a *pumpkin*. (via Brit + Co)

28. Modern Geometric Pumpkin: Since you won’t be carving, stick to a smoother faux pumpkin for this DIY. Its less-pronounced ridges will make it easier to apply these vinyl pieces. (via Design Improvised)

29. DIY Pastel Marbled Pumpkins: If you’ve tried marbling before, you know how fun it can be experimenting with different colors. For a softer and more feminine look, opt for pretty pastel-hued marbling paints. (via Proper)

30. Watercolor Pumpkins: Watercolor paints won’t actually show up as well on white plastic pumpkins. Instead, coat your pumpkins using a flat white spray paint with a primer for the base color. Once finished, seal the deal by spraying on clear paint or mod podge gloss spray. (via Lines Across)

31. Donut Pumpkins: Donut-anything is a winner in most peoples’ books. For a similar look, cover yours with “frosting” and use a tiny brush to paint “sprinkles” everywhere. (via Studio DIY)

33. Gold and Neon No-Carve Pumpkins: This craft combines all of your favorite DIY goodies and trends: spray paint, gold, neon, splattered, and ombre. For an eclectic feel, use a variety of pumpkin shapes and sizes. (via The Source)

34. Blue Porcelain Craft Pumpkin: Spray paint a cream craft pumpkin with white primer, and once dry, use a pencil to draw a design and trace it with an acrylic paint marker before painting the rest blue and black. (via Craftberry Bush)

35. Brushstroke Pumpkin: Create this chic and elegant look with basic black, white, and gold paints and a stiff paint brush. The harder the bristles on the paintbrush, the easier it will be to achieve a pronounced brushstroke. (via The Merrythought)

36. Gold Geo No-Carve Pumpkins: These geometric gold pumpkins may look fancy, but they only require you to use a gold pen. (via Lovely Indeed)

37. Mesh Painted Pumpkins: If you’re digging that rustic aesthetic, use a chalky paint that will leave an ultra-matte finish. Simply use a mesh bag or sheet as a stencil and apply your paint using a foam brush or cotton ball. (via Creme de la Craft)

38. Modern Pumpkins: Though simple, these modern painted pumpkins are far from boring. All you’ll need to achieve the modern geometric look is white craft paint and painters tape. (via Oleander + Palm)

39. Nail Polish Marbled Pumpkins: These half-dipped marbled pumpkins only require water and nail polish to make. For more variety, alternate the mini pumpkins by dipping some on one side and dipping the others from the bottom half. (via Say Yes)

Are you ready to jump on the painted pumpkin bandwagon? Follow us on Pinterest for more creative pumpkin ideas.