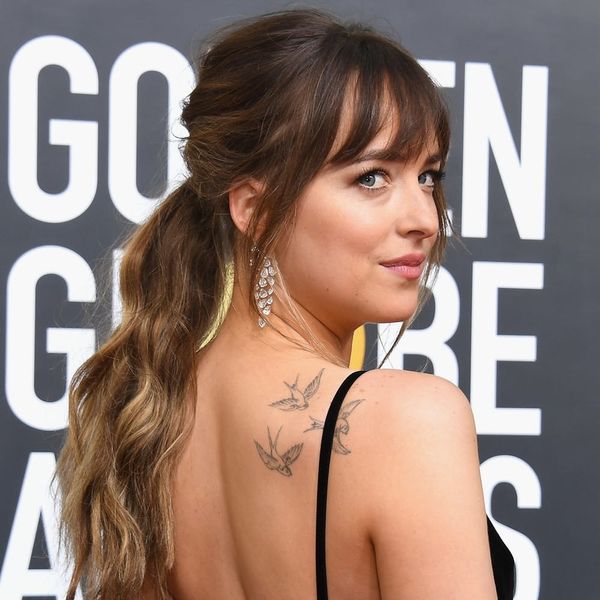 This year, the 2018 Golden Globes red carpet was swarming with celebs wearing black on black as a way to show support for the #metoo movement. Despite the monochromatism, we were still blown away by some of the showstopping looks.

Perhaps most notably dressed was Dakota Johnson, who wore a long black Gucci gown. The dress looked relatively understated from the front — ’90s-era spaghetti straps, a flowing train, and a simple silver buckle — but just when we thought the 50 Shades of Grey star couldn’t look any more stunning, she turned around to reveal a back that blew us away. (Photo via George Pimentel/WireImage)

The actress revealed a starry black and silver train, complete with a bow fashioned from crystals and an explosion of all things sparkly running down the back of the dress. The train, which was comprised of a semi-transparent black mesh, certainly wasn’t lacking in the sparkle department. (Photo via Steve Granitz/WireImage)

The 28-year-old completed the look with dangly earrings and a silver bangle from jewelry designer Nirav Modi. Her hair was pulled into a chill wavy ponytail; a style which put her large shoulder tattoos (three birds in flight) and a small behind-the-ear tattoo on full display. While we love Dakota’s tattoos, we’ve gotta give it to the glittery back of this dress for holding our gaze tonight. (Photo via Kevork Djansezian/NBC/NBCU Photo Bank via Getty)

What do you think of Dakota Johnson’s Golden Globes Dress? Let us know @BritandCo!