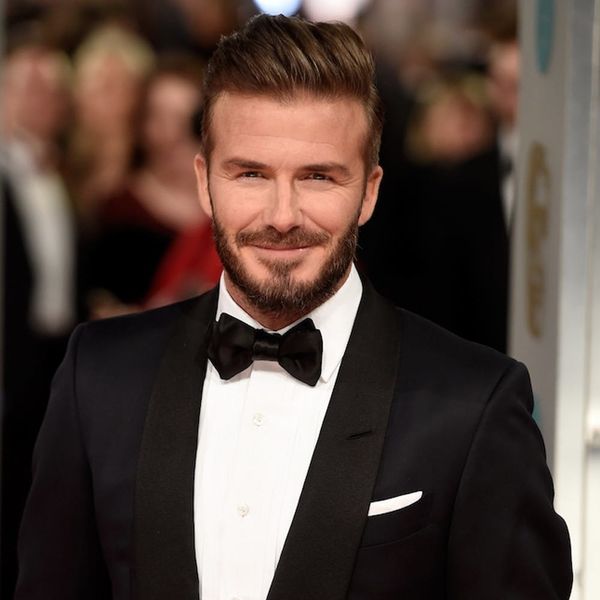 David Beckham was announced People Magazine’s Sexiest Man Alive 2015 last night on Jimmy Kimmel Live! The audience played a guessing game with the the former footballer to try and figure out his identity. Once the jig was up and David’s handsome mug was revealed, the SMA 2015 accepted his award with plenty of good humor. In his “acceptance speech,” he joked to Jimmy, “It’s the best moment of my career. I would obviously like to thank my parents for bringing me into this world, of course. I would like to thank my hairdresser, my stylist and Photoshop.”

Frankly, it’s kind of remarkable that despite all of those H&M billboards and underwear modeling campaigns, it’s the first time the 40-year-old has won the title. A true pioneer of the man bun with athletic prowess to boot, David Beckham is arguably a perfect male specimen — but he’s not just really, really ridiculously good-looking. The dad of four also has a pretty sexy heart and personality too. Here are the top five ways that David Beckham is sexy with his shirt on.

1. He’s a doting father: David has been hailed by wife Victoria Beckham as the best dad. Plus, for his and Victoria’s 16th anniversary, rather than doing a romantic night alone, they brought along all four kids. It’s just awws all around.

2. He’s a supportive husband: When Victoria was accepting Glamour’s Woman of the Year Award (man, it’s been an award-winning year for the Beckhams), she credited her husband as the one who helped make it possible. “Running a business, my work with UNAIDS and most importantly being a mom wouldn’t be possible without David,” she said in her speech. “Not only is he the most incredible father, but he is supportive and someone who loves and inspires me every single day.” Plus, he’s always front row with Harper in his lap at all of her fashion shows.

3. He’s a philanthropist: Recently, David held a charity football match for UNICEF, a humanitarian org that provides assistance to children and mothers in developing countries. He’s worked with UNICEF since the beginning of his career. He’s been named a Goodwill Ambassador, and recently traveled to Nepal and Argentina to visit and aid those in need. He’s also a patron of the Elton John AIDs Foundation. What a guy.

4. Even his body art carries lots of meaning: If the fact that David tattooed his four-year-old daughter’s drawing onto the palm of his hand isn’t cute enough, he’s got 31 more pieces of ink to signify his devotion to his family. In his 2003 autobiography, he stated, “I’d finally realized what I wanted a tattoo to represent. Mine are all about the people in my life, my wife and sons, who I want with me always. When you see me, you see the tattoos. You see an expression of how I feel about Victoria and the boys. They’re part of me.” He recently got this adorable tattoo drawn by his youngest, Harper, on the palm of his hand. How’s THAT for being dedicated?

5. He’s a total softie: Nothing is sexier than a man who isn’t afraid to show his sensitive side, and David definitely isn’t scared. In a 2013 interview with BBC Radio1, he admitted that he can sometimes be an “emotional wreck” when he’s watching TV (or might we say, the telly?) or a flick. “I can’t get through some movies without shedding a tear; I can’t lie,” he said. “I’m the same when I’m watching The Office or watching Friends. I just can’t get through it.” You can cry on our shoulder any time you want, David.

Check out Jimmy Kimmel’s reveal below.

What do you think about David Beckham’s Sexiest Man Alive win? Tell us in the comments below!

Kimberly Wang
Kimberly Wang writes about all things pop culture, tech, style, and beauty. She's a Bay Area transplant and has an MFA in Creative Writing from Columbia University. On a sunny New York day, you can find her hanging out with her mini schnauzer Isabelle Jellybean on a blanket in Central Park.
Pop Culture
More From Pop Culture