14 Disney Manicures You Can Nail This Halloween 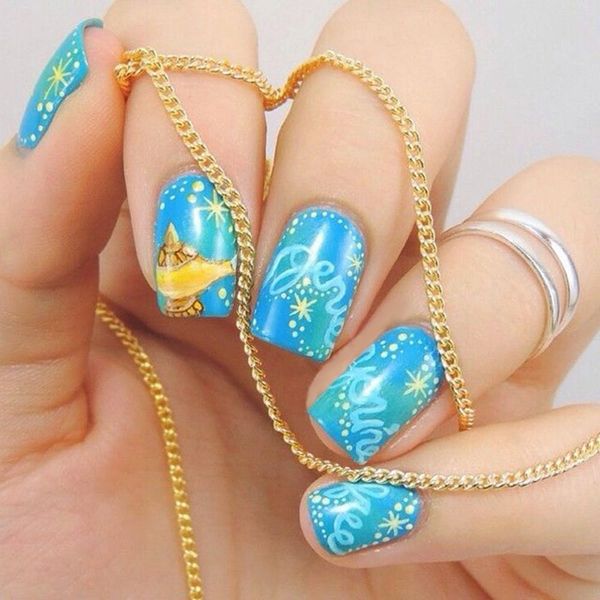 Sometimes the best Halloween costumes are the ones of the characters you most adored when you were a child. While ’80s glam characters like Jem are never a bad idea, we are talking about the heroes and villains who really pull, twist and turn on all your heartstrings. Disney knows how to do just that. You might have nailed which character you’re gonna dress up as, but don’t forget to let your nails get in character too. We’re sharing the best Disney manis that would complement every Disney costume this Halloween.

1. Ursula from The Little Mermaid: You don’t need to steal anyone’s voice to wear these villainous nails. With a few simple steps and a steady hand, you too will be rocking these manis while you use thing-a-ma-bobs. (via Chalkboard Nails)

2. Titans from Hercules: If you love the movie Hercules, then you are most definitely going to love these titan nails. They are strong, bold and beautiful — just like you and your goddess costume. (via Chalkboard Nails)

3. Martian Toys from Toy Story: THE CLAW! How adorable are these Toy Story manis? All you need is a coat of blue and a hint of green. So fun! (via @trashedandlacquered)

4. Sally from A Nightmare Before Christmas: Although this design might consist of a few more steps than we like, we can’t get over how beautiful the end result is. (via The Happy Sloths)

5. Maleficent from Sleeping Beauty: Just like Maleficent herself, these nails are not to be messed with. Villainous and electrifying, you know you are going to get a lot of compliments with this flashy design. (via Definitely Meg)

6. Genie from Aladdin: If we had to make any wish, it would be to have these nails on our fingers STAT. Okay, and maybe a million dollars, but definitely these nails first. (via @infinitelypolished)

7. Tinkerbell of Peter Pan: Go off to Never Never Land with these super dark, yet cute nails. While you might not be able to fly, at least you’ll be surrounded by a little bit of pixie dust. (via @lieve91)

8. Stitch of Lilo and Stitch: Let these Hawaiian nails add some fun to your Halloween costume. Don’t worry, they won’t cause as much havoc as you think. (via Depois Dos Quinze)

9. Belle from Beauty and the Beast: We are loving these windowpane manis. Whether you are dressing up as Belle or not, we say give this design a try just for the heck of it! (via Paulina’s Passions)

10. The House from Up: Give your nails new height with these UP-inspired designs. All we need now is a dog that can talk. (via @prim_n_polished)

11. Ariel from The Little Mermaid: These minimalist Ariel nails are super simple and chic. When you’re not pairing them with your Disney costume, wear them to the beach when the days get warmer again. (via Once Upon a Nail)

13. Disney Princesses: If you can’t decide which Disney princess you want to be this year, then just be all of them! This mani shows off their goofy side, because even Disney princess know how to have fun too. (via Vanity Projects)

14. Simba from The Lion King: Want to be a mighty king for Halloween? Why not use this mani design to get all the animals talking. (via Toxic Vanity)

Are you going to be dressing up in a Disney costume this Halloween? Let us know in the comments below!

Raven Ishak
Raven is a Florida native who recently moved to New York City to pursue her dreams. You will always find her taking an unhealthy amount of photos for her Instagram, obsessively tracking the latest coffee shops and restaurants, and watching movies with her boyfriend.
Disney
Beauty News
Disney Halloween Nail Art Designs
More From Beauty News