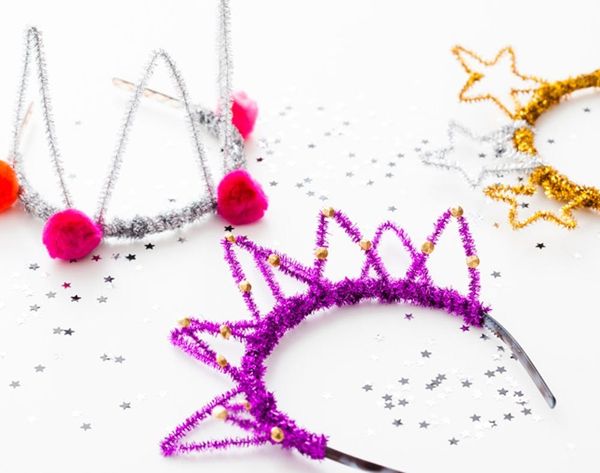 There’s no shortage of DIY-ing during the holiday season, especially since once all the homemade gifts are beautifully wrapped and your pad is decked out to the max in holiday cheer, you have all less than a week to prep for the most party-heavy holiday there is, New Year’s Eve! Don’t worry, we’ve got our share of tricks and tips up our sleeve so that the short transition is as painless as possible, and that starts off with a DIY basic pretty much made for ringing in the New Year: making glitzy crowns using headbands and metallic pipe cleaners.

So we know what you’re thinking: pipe cleaners? Come on, we’re not 12 years old. We get that. But since over-the-top headwear is a staple of this celebratory holiday, it seems totally appropriate to whip out this arts and crafts staple and make playful headwear that our grown selves wouldn’t be embarrassed to wear. And if we did it right, you shouldn’t be either!

Easily the cutsiest (and easiest to make) of the bunch, this silver spire crown gets playful pops of color from pink and orange pom poms.

First things first: yes, those are eyeballs on my nails. Our pals at TopCoat tricked out all the gals’ nails here at Brit + Co. for our holiday party last week, and my admittedly creepy mani (that I love) is still holding up. So that’s that!

Now, let’s turn our attention to the main attraction: this silver spire crown. Grab a silver pipe cleaner and wrap it around the center of the headband loosely in an arch shape. Then once it’s fastened, bend the arch into a pointed tip. Add one spire to either side, then set the headband down flat and rotate the three spikes to stand up at attention. To give the crown a really polished look, wrap silver pipe cleaner around the headband—we started where the prongs on the inner part of the headband began, and stopped once they were covered.

Snip the pipe cleaner at the end of the pronged area, then go ahead and glue on your pom poms! We can’t get enough of this eye-popping embellishment, but you could also add on gems or large sequins for something less whimsical.

We can’t help but smile when we at this crown. We’d pose with this crown in a photo booth in a flash.

It’s the go-to icon for NYE: the star. Rock it royally with this gold and silver headband.

It’s easy to make these pipe cleaner stars when you follow a template like you see above—just bend and twist the pipe cleaner around the outline and snip off the excess once you’ve tied it together. We opted for three metallic stars—not too glitzy, yet super festive—though you could fill up the entire headband with these twinklers if you want to.

As far as pipe cleaner headbands go, this star-topped one is pretty darn classy. It’s the perfect hair accessory for jazzing up a posh all-black outfit.

A studded pink pipe cleaner crown? Yep, we went there!

Snip a few pink pipe cleaners in half: we’re making two rows of mini spikes on this headband. Add the front row using the same technique as the first crown we showed you: tying, looping, securing, and pinching the top. Add one after the other till the majority of the headband is covered.

Now stud that crown! Only really tiny studs will wrap snugly around these skinny pipe cleaners, so make sure your studs are appropriately mini. We studded both sides as well as the tip of each front spike.

Now add a second row of spikes on to the back side. This gives the crown some dimension, as well as really amps up the already edgy vibe. Then, finish by wrapping the headband in matching pink pipe cleaner.

Doesn’t this crown look like something straight outta Sophia Coppola’s Marie Antoinette? The gold studs really pop against the deep pink pipe cleaner and give this crown some unexpected sparkle.

Make a handful of these headbands before your New Year’s Eve party and lay them out on a confetti-covered table for guests to pluck up as they arrive. A party favor that doubles as festive accessory? We can get behind that! If you can’t wait till New Year’s Eve to wear ’em, you can just rock them around the office like we did ;)

Will you be DIY-ing and accessories, decor, or party favors for New Year’s Eve? Tell us about your projects in the comments below!