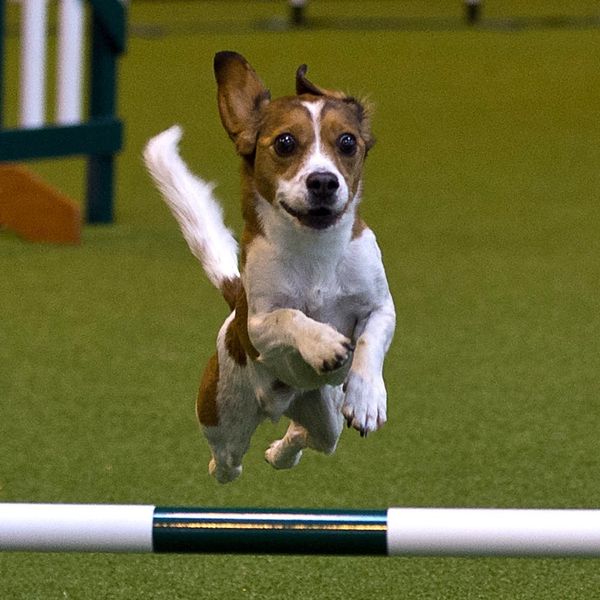 The fact that dogs dream about their owners is just about as adorable as our own dream of visiting the dog sanctuary in Costa Rica, and just makes us love our canine besties even more (if that’s possible). And while most of us have a pup or two that have a special place in our lives, this dog that totally (epically!) failed an obstacle course will absolutely tumble his way into your heart.

Fearlessly taking on the agility competition at Crufts, the UK’s biggest dog show, and apparently overwhelmed with excitement, rescue dog Olly may not have nabbed a ribbon, but he certainly found viral internet fame, along with endless adoring fans.

While Olly’s good-natured handler attempts to lead the Jack Russell through the course, the dog flies through it at top speed and with full vigor… though without a heck of a lot of talent. He leaps, trips, rolls, and skids across the floor while seemingly enjoying every moment of his disastrous (yet totally joy-filled) run.

Maybe it’s his ability to love every moment of nailing the biggest FAIL we’ve seen in a while or his willingness to just get up and keep going, but there’s something about this pup that we totally relate to. And we’re not the only ones…

But most peeps were just feeling the love…

Thank you Olly the Jack Russell for wholeheartedly throwing yourself into the agility exercise at #Crufts. #gem https://t.co/J87JAj5Q4Y

Best dog at #Crufts this year hands down… https://t.co/GPgZ6kf8c7

The real #champion of #Crufts ,what a #dog 😂 https://t.co/NKLVYMTBD0

OMG!!! Watch this if you need a laugh today😂 #dogsoftwitter #dogs #crufts https://t.co/WNkSv6HvmP

Desiree O
Desirée O is a ‘Professional Bohemian’ who loves anything and everything related to the arts, entertainment, and pop culture. She ADORES being a ‘Newsy’ for Brit + Co, covering all of the latest tidbits of awesomeness that you want to read about. When she’s not writing, she’s either making messy art, going on long adventurous walks with her camera, or poking around over at bohemianizm (http://www.bohemianizm.com/). You can find out about Desirée O and her work at http://DesireeO.com/ or follow her on Twitter @DesireeO.
Dogs
Entertainment
Dogs
More From Entertainment