Donald Trump Is Already Being Sued for Violating the Constitution 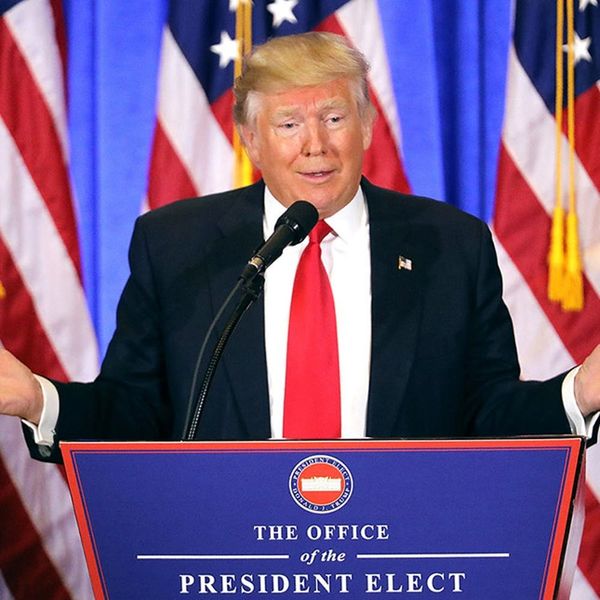 There are a lot of criticisms about Trump’s new presidency, but one of the main concerns is all the possible conflicts of interests he might have due to his personal business ventures. Trump claims this won’t be a problem, and that he has shifted all his responsibilities to his two sons. But according to a team of constitutional scholars, Supreme Court litigators and former White House ethics lawyers, that’s not enough. That team (known as Citizens for Responsibility and Ethics in Washington) is expected to file a lawsuit today against Trump for violating the Constitution.

The basis for this particular lawsuit — which is scheduled to be filed today (January 23) — is that Trump is violating a provision in the Constitution known as the Emoluments Clause. The definition of that clause prohibits any “Person holding any Office of Profit or Trust under [the United States] from accepting any present, Emolument, Office, or Title, of any kind whatever, from any King, Prince, or foreign State.” Essentially, that means he can’t take money or gifts from foreign states.

The problem here is that Trump’s hotels and various other companies are still accepting money from foreign governments in a myriad of ways. Specifically, it has stakes in golf resorts and licensing deals for hotels and residential towers in about 20 countries.

So what happens after you file a lawsuit against POTUS? The team filing the lawsuit is asking a federal court in NY to order Trump to stop payments from all foreign government entities. They are not asking for any monetary damages. However, critics say it’s extremely unlikely to be accepted and sent to court. Whether it is accepted or not, this is only the first of many cases that are likely to show up against Trump due to his possible conflicts of interest. You can bet we’ll be keeping you updated.