The 360 Eye Might Just Be the Smartest Vacuum Ever 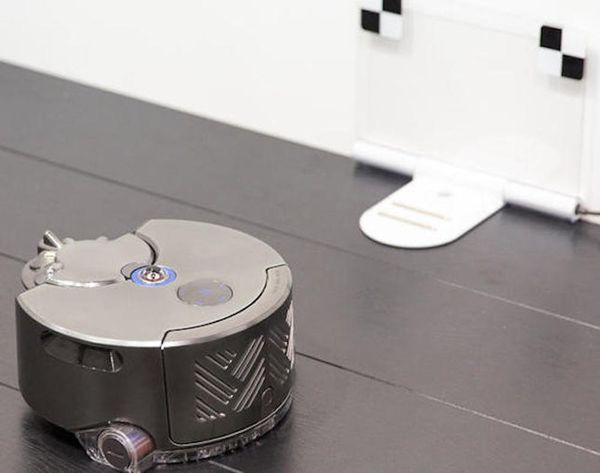 We’ve totally become accustomed to basic things being transformed by technology, such as printing, reading and, well, even moving, so we guess it’s only to be expected that the latest in home cleaning tools takes the form of a… robot? That’s right! Dyson’s new robot vacuum cleaner, the 360 Eye, has finally made its debut in the smart gadget market after 16 years in the making.

Because James Dyson claims that “accurate navigation is the key to cleaning properly,” the 360 Eye uses its embedded 360-degree camera to take pictures and create a live map of whatever room it’s in. With the map in mind, it proceeds to find the center of the room and vacuums one 10 square-foot section at a time. Because the device tracks its path via the camera, it never wastes power or time going over the same sections again and again. And with more suction power than the other robot vacuums out there, it doesn’t need to!

The robot vacuum sits in a charging station against a wall, and releases itself to clean upon your demand. And don’t think you have to be standing in the room with the gadget to get it going… the 360 Eye can be controlled via a smartphone app over Wi-Fi, allowing you to start and stop your little cleaning buddy while on vacation, at the office or just in a different room (yes, sometimes we’re that lazy, too!). The 360 Eye avoids walls, pets and table legs by employing its infrared sensors and spatial knowledge, basically mimicking a human’s ability to avoid running into things. When the room has been thoroughly cleaned, the vacuum returns to its charging station to await it’s next go-around.

Would you invest in Dyson’s robot vacuum? Share your thoughts on the smart home cleaning tool with us in the comments below!

Allison Hutchins
Allison, a community editor at Brit + Co, has a love for art and a passion for fashion. Her latest DIY projects and homemade objects can be found on her Etsy shop, Designs By A Renee.
Gadgets
Tech
Gadgets
More From Tech