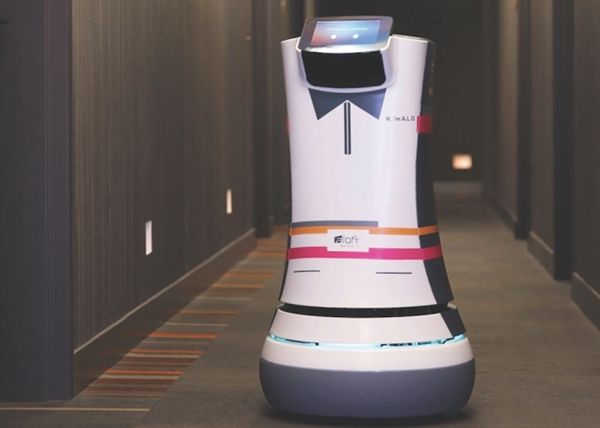 R2-D2 better watch his back. There’s a new robot on the loose — and he’s bringing you extra towels.

According to Yahoo Tech, his name is ALO, and he is the world’s first robot butler. You can find him at Aloft Hotels in Cupertino, California (which you may know as Apple headquarters). The Silicon Valley hotel is notorious for its use of high-tech gadgets, including in-room Apple TV and an interactive software known as “Cool Concierge,” which looks up any information a guest might need.

ALO — also known as a Botlr — was designed by robotics startup Savioke, which also created the SaviOne robot, a delivery robot for the services and care industry. The Botlr is three-feet tall and dressed for success in a bow tie and name tag. You know, just in case you get him confused with all those other robot butlers wandering around.

He’s definitely cute, but also speedy. Moving at 4 mph, he can get to any of the hotel’s 150 rooms in three minutes or less. How ALO operates an elevator entirely on his own without fingers, we’re not totally sure.

You’ll receive a phone call when your ALO is outside and once you open the door he’ll give you a friendly beep to say hello. Lift up his lid, grab your requested goods and use the touch screen to let him know if you have received everything you need. Now for the tricky part: How do you tip a robot? Well naturally, with a tweet. If he’s done a great job he’ll do a little “happy dance” and be on his merry way.

ALO’s first day on the job is this week, August 20. For now, you’ll only find a Botlr at Aloft in Cupertino, but they are expected to roll out to more hotels over the next year.

How do you feel about this robotic bellhop bringing you your toothbrush? We’d love to know, so share your thoughts below!