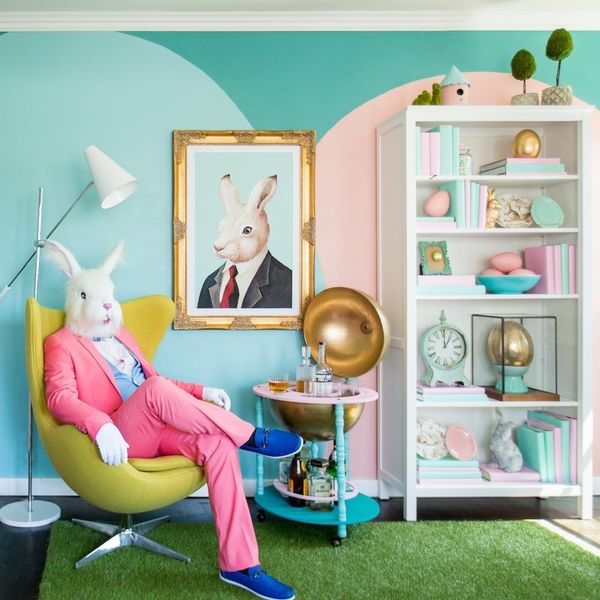 The interior design experts at Laurel & Wolf have worked with many high-profile clients over the years. From country music stars to celebrity news hosts, they’re no strangers to working with the A-list crowd. But not even this impressive resume could have prepared them for the client that came a-hopping their way this April. Who was it, you ask? Well, he’s beloved worldwide, he’s generous, but a bit sneaky, and he has a particular penchant for pastel color schemes. Still stumped? Drumroll please… it’s the Easter Bunny!

“I needed a space where I could retreat to from my busy day-to-day running around,” he explains in an exclusive interview about the makeover of his study. And luckily, Laurel & Wolf designer James Tabb was more than up for the task.

James based his design around a pastel, cotton-candy pink and robins-egg blue color palette, but the egg-inspired decor didn’t stop there. He was sure to incorporate egg imagery throughout the space, from the shape of the chair to the prominent display of the EB’s golden egg collection and the oval shapes painted on the study’s accent wall.

“We brought the outdoors in through the alternative grass rug,” says James. “The Easter Bunny had mentioned that he loves the feeling of fresh grass underfoot, so this was the perfect choice when thinking about a rug to put in his study.” It was also important to the Easter Bunny that the family heirloom portrait of his beloved Uncle Harvey be included. “It really brings a classic touch to an otherwise modern space,” says James.

“My favorite part has to be this bar cart,” says the Easter Bunny between sips of whiskey. “It was a traditional globe, but James had the clever idea to paint it my favorite colors.” The gold from the bar cart also complements the frame of Uncle Harvey’s portrait and the gold egg accents on the bookshelves. “After all, who needs a globe, when you’ve already seen the world?” he quips with a wink.

The Easter Bunny is thrilled with the sweet style of his new study. “I absolutely love this space,” he says. “This is my study where I now come to relax, have a Scotch, read a book and plot my next golden egg acquisition.” And with the biggest day of his year right around the corner, it’s more important than ever that he be well-rested and ready to go. With such a successful design experience for a celeb of this magnitude, the sky is truly the limit for Laurel & Wolf. What’s next? A new den for Santa Clause? A bathroom revamp for the Tooth Fairy? Stay tuned!