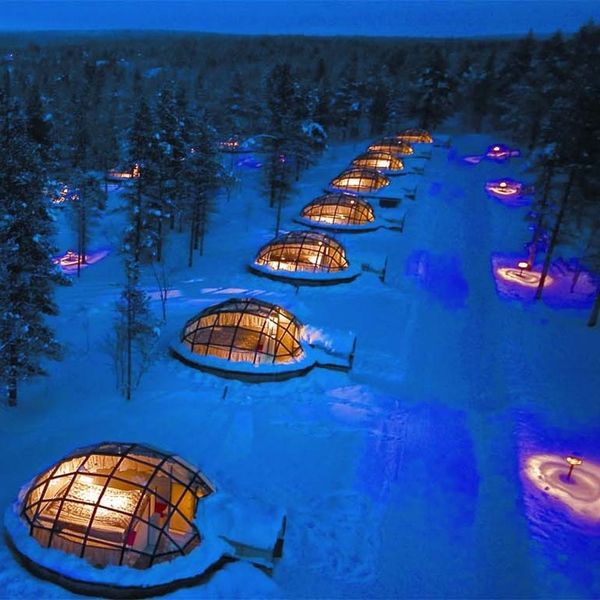 Some of us might still be in the process of pulling out our fave cashmere sweaters and basking in the joys of all the pumpkin spice recipes, but keep in mind, winter is here! We love, love, love winter. It’s the time when we get to layer soft & cuddly clothes, sip cups and cups of homemade hot cocoa and pull out our beloved down comforters. While it might be tempting to hibernate like a bear and enjoy some snow-day activities at home, this is the perfect opportunity for a frost-filled foray. Now’s the time to plan your winter-wonderland getaway, before everything gets booked up.

1. Go to Alaska to see the Northern Lights. Nature puts on quite a show during the winter, as the skies become surreally beautiful thanks to the Northern Lights. The best time to see the spectacular aurora borealis is the dead of winter and the best place is wayyyy up north in Fairbanks, Alaska. It’s geographically right smack-dab under the “aurora oval” that determines where the lights appear.

Stay here: Get cozy at the Chena Hot Springs Resort. This over-100-year-old resort is an ideal place to witness the stunning skies. They specialize in viewings with perks like providing a unique “aurora wake-up call” for guests staying in their Moose Lodge. For those who want to avoid the cold middle-of-the-night air (and it will be COLD), they have the Aurorium, a heated log cabin with large glass windows facing northeast that’s open 24 hours a day. (Photo via Chena Hot Springs Resort)

2. Sleep in the cold at the Icehotel in Sweden. If you want to take an international trip to see the aurora borealis and you’re in the mood for unforgettable lodgings, then you sooooo have to head to the world-famous Icehotel in the Swedish village of Jukkasjärvi (located north of the Arctic Circle). Along with lounging in rooms carved entirely from ice, you’ve gotta get a drink at the Icebar, where the cocktails are served in ice glasses and you can dance on a floor made of snow.

Sleep here: There are several types of rooms to choose from, and since you went ALL the way to Sweden, you might as well splurge for the craziest room you can, such as one of their Art Suites. Each of the deluxe rooms is individually designed and sculpted in eclectic themes by a variety of artists. (Photo via Icehotel)

3. Get your Elsa on in Norway. The best place to bust out “Let It Go” is, without a doubt, Norway. The fjords, the picturesque wooden churches and the snow — lots and lots of snow — await.

Stay here: While Sweden has the Icehotel, neighboring Norway has the Kirkenes Snow Hotel. From late December to mid May, this temporary hotel has rooms featuring detailed snow art with themes from fairy tales to seafaring. They also have king-crab fishing trips, dog sledding and northern-lights tours. (Photo via Kirkenes Snow Hotel)

4. Take a winter river cruise down the Danube or the Rhine. Imagine slowly drifting down a famous river in ye olde Europe at a leisurely pace, seeing all sorts of small European towns and villages and basking in the glow of snow-capped mountains and landmarks. Sounds mighty fine, right? Adventures by Disney (Disney’s travel arm) puts together epic holiday cruises that hit a variety of historical sights, events and treats like seeing the Vienna Boys’ Choir IN Vienna. (Note: I’m going on the Danube Holiday cruise this December and OMG, I can’t wait!)

Do this: Hit, like, every Christmas market and buy ALL THE THINGS. There are handcrafted gifts, ornaments and ornate doodads that make for fabulous holiday gifts. If you’re interested in one of these cruises but don’t want to travel with a whole bunch of kids, they do offer adult-only river cruises with a focus on food and wine. (Photo via Adventures by Disney)

Stay here: Head to the Kakslauttanen Arctic Resort in Lapland, where you can choose to stay in a glass igloo, a log chalet or a snow igloo: totally EPIC accommodations. (Photo via Kakslauttanen)

6. Get lit up at Montréal en Lumière in Montreal, Canada. Head north to one of the largest winter festivals in the world. Montréal en Lumière celebrates winter and lights with oodles to do — performances, cuisine, free outdoor family activities — from February 23 to March 11. If you’d like to pull an all-nighter, head to Nuit blanche à Montréal, a 24-hour party including 200 (mostly free) activities, all linked by free shuttle service. (2017 Nuit blanche schedule to be announced on February 7.)

Stay here:Le Petit Hôtel is housed in two buildings, one of which was once a 19th-century leather factory. Although it has classic touches, such as rustic brick walls and wood detailing, the hotel is still very modern. (Think free WiFi and plasma TVs.) (Photo via Tourisme Montréal)

7. Take a train ride into the Canadian Rockies. There is something so charming about the idea of a leisurely train trip across a countryside that looks like the pristine inside of a snowglobe. You’ll be able to watch the snow-blanketed landscape go by as you sit in your cozy cabin or lounge in the observation car on one of the extended train journeys through the totally gorg Canadian Rockies.

Do this: Enjoy a few of the highlights offered on the various trips, such as going on a Maligne Canyon Icewalk, taking a private sleigh ride by Lake Louise or visiting a spa in Whistler. (Photo via Fresh Tracks Travel)

8. Explore the city of Takayama in Japan. Venture to the Far East this winter for an unforgettable visit to Takayama, a town in the mountains of Gifu Prefecture. Walk the narrow streets of the Sanmachi Suji historic district, which is lined with wooden merchants’ houses dating to the Edo Period (1603-1868).

Stay here: Don’t stay in one of the big hotels. Instead, book a room at one of the many traditional guest houses (ryokan) in the area. Some of them are in century-old farmhouses, and others feature amenities like outdoor hot-spring baths and culinary delights. (Photo via Getty)

Sunny Chanel
Sunny Chanel is a freelance writer as well as the founder of the whimsical site Wonder and Company. When this proud San Franciscan isn't writing, working on her fixer-upper or doing crafts, she is playing dress up with daughter and planning her next trip to Disneyland.
Winter
Travel
Winter
More From Travel