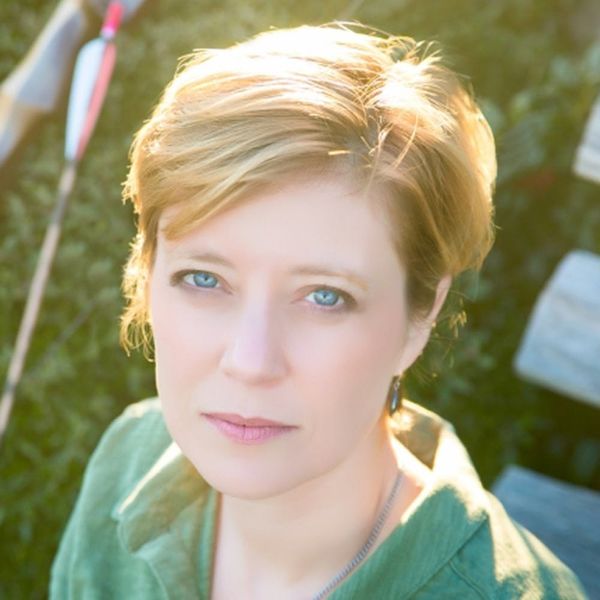 If the idea of finishing school has you ready to jump out the window, and you’d rather spend your days embarking on crazy adventures, then you and Erin Beaty’s The Traitor’s Kiss are a match made in heaven. Beaty’s debut novel stars Sage Fowler, a girl who refuses to be tamed… and oh yeah, she’s also the newest spy for the army. This book has got kissing, devastating secrets, and kingdom saving — what more could you want? Snag your copy of The Traitor’s Kiss for a cozy rainy night in, and we guarantee you’ll be up all night flipping pages. We caught up with author Erin Beaty to chat creativity, inspiration, and more. Scroll on to read some words of wisdom from an IRL adventurous lady.

EB: Anytime the kids are gone or asleep definitely reduces distractions, but the best time is usually in the evening. By then I’ve either been struggling to find the time to get to writing or I’ve been interrupted all day, so what I need to write has been bubbling for hours and is dying to get out. I used to write in our home office area, but there’s no door, and it’s a high traffic area under just about any circumstances. My husband set up a card table in the corner of the guest room, and things got much better. (Photo via Erin Beaty)

EB: I break out the old-fashioned notebooks and change my environment by going to a coffee shop or something. Writing things out is slower, but it unlocks creative parts of my brain. Interestingly, what I write out by hand gets minimal changes in the editing process too. The best stuff comes out then.

EB: I discovered Tamora Pierce’s Alanna while in junior high, and even though her world was very different from ours, it was such a relief to find a female character who wanted to be in the military. And if there was someone willing to write Alanna and there were people willing to publish Alanna and there were people willing to read Alanna, I wasn’t alone. There were other girls like me out there. Maybe it sounds cheesy, but The Song of the Lioness series gave me a strong base to stand on, especially as I struggled to get into and then through the Naval Academy. It also wasn’t a surprise to meet a ton of other Alanna fans when I got there.

In real life, I had an Academy classmate who became a Marine Corps pilot. She and her crew saved dozens up lives, right up to the day her medevac helicopter was shot down over Iraq. Captain Jen Harris will always be the ultimate hero to me. I wish I had half her strength.

Check out the latest in the SDO Gallery, https://t.co/wszpbdrF1j pic.twitter.com/8YO6veBdVp

Other than seeing people post beautiful pictures of my book? I love keeping up with my fellow 2017 debut authors, but there’s too many to name here. Otherwise, it’s probably not something too many other people are interested in: I’ve got a thing for the sun. Always have. It’s the most beautiful and fascinating thing. In college, my group’s satellite design project was a polar orbit solar observatory, and the NASA guys who came to our presentation said it was an awesome (but expensive) idea.

To keep up with all the current satellite images, I follow NASA Sun Science and The Sun Today on Facebook and @NASAsun. Yeah, I’m a nerd. I’m not ashamed.

EB: I’m not much for contemporary fiction, but Tiffany Jackson’s Allegedly knocked my socks off, and I can’t believe it’s not on the bestseller lists. I recommend it whenever I can.

EB: Since he’s going on the Fierce Reads tour, I moved Taran Marathu’s Summoner Series to the top of my pile (and how had I not heard of these books before now?!?! I’m hooked.), but believe me, the TBR stack is about waist high right now. I have so many books I’m dying to read, but I tend to put the huge blockbuster books off a bit. Partly because too often I’ve been disappointed, but mostly because they already have the support they need.

EB: There’s no one else who can do you, so don’t try for anything else. I love knights and swords and intrigue, and I love Jane Austen, but I swear I never set out to write a book that encapsulated all of those elements — it just came out that way. Fill yourself with what you love, and when it overflows onto paper, it will be made from that. And what you love, others will love too. What inspires you will inspire others, I promise.