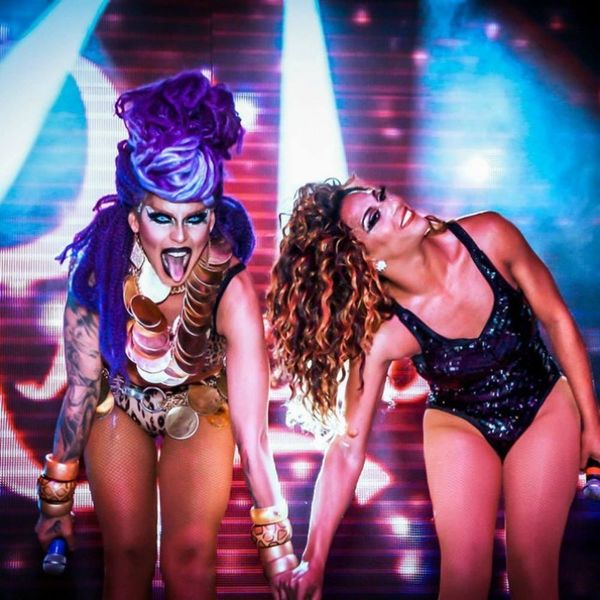 With all its glitter and pageantry, big personalities and even bigger hair, drag has got to be one of the finest performance histories we have. And with RuPaul’s Drag Race Season 7 premiering tonight, we couldn’t be more excited to see all of Ru’s new girls in action. You don’t need to stream or throw a viewing party to get in on the fun; you can get inspired to live as fiercely, fabulously and fearlessly as a Drag Race Cover Gurl by following these amazingly talented social media stars on Instagram. Besides, any feed without them would just be a drag.

1. @rupaulofficial: Seriously, how could we possibly skip Mama Ru? Not only is she fabulous, she’s wise. In her words: “If you don’t love yourself, how the hell can you love someone else?” Amen.

2. @yarasofiapr: Trippy costumes abound in this queen’s feed. Follow Yara for makeup color inspo — she uses it super creatively. Even if you don’t do it exactly like she does, she may inspire you to dare a little more.

3. @theonlyalaska5000: One of the faces of the fantastic American Apparel campaign that ran this winter, Alaska has all the enormous blonde hair and attitude you could possibly handle.

5. @peaches_christ: San Francisco staple and empress of reenactment, this drag queen does some of the best pop culture costumes you’ll see in your life. And seriously… those eyebrows!

6. @sharonneedlespgh: Who knew there was such a powerful cross section of spooky and glamorous? RuPaul’s Drag Race Season 4 Winner Sharon Needles puts the BOO in beautiful.

8. @sutanamrull: Vogue model or drag queen? Honestly, who cares/both. Distinguishing those as separate categories is so last century. Rocking one of the fiercest struts ever to grace a runway, Raja is so beautiful it hurts our heads. No wonder she won Season 3 of RuPaul’s Drag Race.

9. @noextrai: Willam’s made a career out of being crass with a smile, and we love it. Follow her for fitspo, laughs or just a daily dose of WTF.

10. @chadmichaelspage: Is that Cher? Or Angelina Jolie? Nope. It’s consummate queen and Winner of RuPaul’s All Stars Drag Race, Chad Michaels. We’ll never get sick of her Cher impression, and we don’t think Cher will either.

11. @heklina: Another San Francisco staple, activist Heklina has an amazing voice (thank god for Insta vids) and the wigs to match it.

12. @torriin: It’s no wonder this queen made Buzzfeed’s list of most beautiful on Instagram. She’s got us gawking at her ombre hair and dewy makeup.

13. @thejinkx: Loveable and adorable, Jinkx Monsoon is the Season 5 Winner of RuPaul’s Drag Race. She won on her charm, wit and seemingly endless knowledge of the strange and wonderful ladies of yesteryear. She’s like the Lucille Ball of drag, and we can’t get enough of her.

14. @itsshangela: Equal parts hilarious and glamorous, Shangela will leave you clutching your sides and investing in eyeliner.

15. @latriceroyale: There’s no better inspiration for a second chance than Miss Latrice Royale. Follow her not only because she’s spectacular (look at her, she’s fab) but because she represents the amazing, transformative and even life-saving side of drag.

Don’t be a drag, just be a queen. Who’s your fave? Let us know in the comments below.

Maggie Tokuda-Hall
Maggie is freelance editor for Brit + Co, a children's book author and bright color enthusiast. When she's not reading, you can find her doodling, making greeting cards or wandering around San Francisco. During the week, she's at the Chronicle Books offices.
social media
Fashion
social media
More From Fashion