Your Jaw Will Drop at This Guy’s Free $21,000 1st Class Upgrade on Emirates 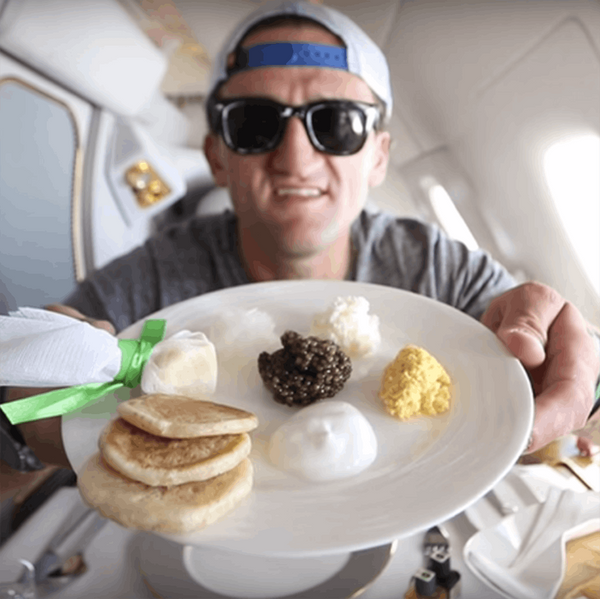 It’s a dream we all have. That you’ll check in at the airport for your economy class ticket, when suddenly a harp starts playing and an airline employee tells you you’ve been upgraded to first class. All for free, obviously. Then you come out of the daydream and pay the $100 you’re being charged for your bag that’s three pounds overweight.

Youtube star Casey Neistat explains he was recently traveling from Dubai to NYC when he received a free first-class upgrade. He then googled how much his upgrade was worth and discovered it was going for nearly $22,000. Casual. Casey is an adventure vlogger on Youtube who has over four million subscribers. So, TBH, a low-key partnership between him and the airline seemed likely. But he specifies in his video that he did not collaborate with the airline on this. It was an actual, totally legit miracle of an upgrade. Or Emirates googled him before he checked in, either way. But we’re going with the former.

Throughout his 14-hour journey, Casey chilled in his private chamber that came complete with automated doors. DOORS, you guys. He needed a remote control for his giant TV because the seat was that far away. Also found in his airplane suite: a writing kit, a mini bar, toiletries, slippers, pajamas and a full menu for on-demand food whenever he wanted it. He ordered caviar. Because why wouldn’t you in this situation?

After he got exhausted by his new life of luxury, he transformed his seat into a bed, which he says is more comfortable than his bed at home. In the a.m., he woke up just in time for a shower. A SHOWER. A flight attendant escorted him to the massive shower room where he freshened up before landing.

All of this is frankly mind boggling and honestly makes our economy seats look like some sort of modern day torture chamber. After watching this 10-minute vid in full, we’re left with just one question for Casey: Is it mandatory to wear Ray Bans while in first class on Emirates? I mean, the dude showers in them. Maybe that’s just an aspect of the elite class our heads can’t quite understand yet.