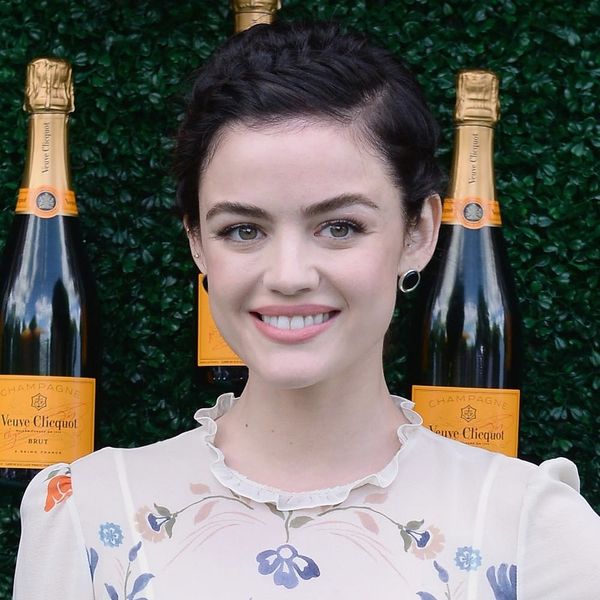 After six years, Pretty Little Liars is coming to an end with tonight’s big finale (at least for now — there’s no telling what the potential spinoff may bring!). As with most series finales, it wouldn’t be complete without a HUGE life event like a marriage, a baby, or a death going down, and from the looks of Aria’s vintage-inspired wedding dress, we’re betting on the former.

The shot, courtesy of People mag, shows the beaming bride showing off her gorgeous gown. The stunning look features heavy beading, a sheer bodice overlay, and a jeweled waistline in rich ivory.

We got a closer glimpse of the bride thanks to actress Lucy Hale, who posted a pic to Instagram of herself looking lovely and happy as she posed with her gang.

“Tomorrow,” she wrote alongside a crying face emoji. “#pllendgame.”

The snap also gave us a peek at the dresses bridesmaids Spencer, Emily, Hannah, and Alison would (hopefully!) wear as they accompany their friend down the aisle. The bridal party appears in varying styles of a navy-blue floor-length frock: Shay Mitchell’s character went for a deep plunging V-neckline, for instance, while Ashley Benson’s covered up with draped sleeves.

This must be the very moment they see Aria's wedding dress for the first time. pic.twitter.com/v5vMIztrMc

While all of the ladies undoubtedly look gorge, there’s still plenty that can go wrong for Aria yet, and judging by the looks on her maids’ faces, that just might be the case. Her groom, Ezra, played by Ian Harding, tried to prepare us for any blows that may come our way tonight, previously telling People, “There definitely is a wedding, but I don’t think it’s going to go like people want.” *Gulp* “In typical Rosewood fashion, it’s never smooth, and it’s never certain. It’s like if something goes really well, that means there’s hell around the corner.”

Uh oh… guess we better tune in tonight at 8/7c on Freeform to see how it all shakes out!

What do you think of Aria’s dress? Tell us over @BritandCo.

Nicole Briese
Nicole is the weekend editor for Brit + Co who loves bringing you all the latest buzz. When she's not busy typing away into the wee hours, you can usually find her canoodling with her fur babies, rooting around in a bookstore, or rocking out at a concert of some sort (Guns N' Roses forever!). Check out all her latest musings and past work at nicolebjean.com.
Wedding Style
Wedding Style
Wedding Style