From Linda to Betsy: Meet the Women of the White House 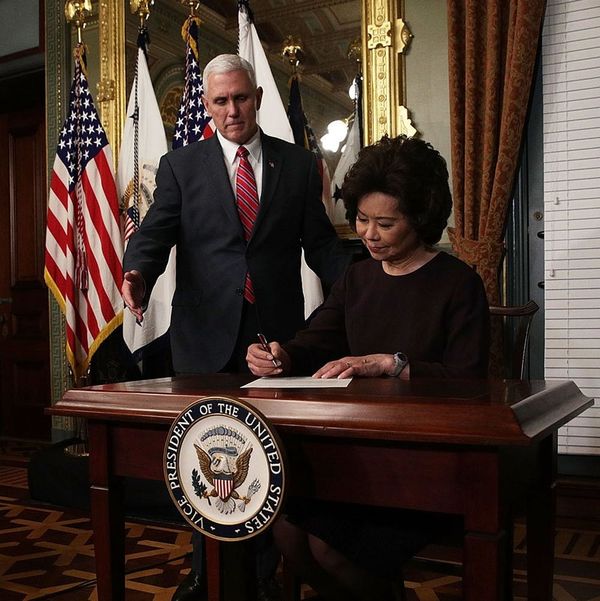 Donald Trump’s White House is a boy’s club. Only four of the 24 positions in Trump’s cabinet belong to women. Whether you love him or hate him, that’s a mere 17 percent of his most important employees. Obama’s administration was comprised of 36 percent women – still not ideal, but statistically better. Our Canadian neighbor, Prime Minister Justin Trudeau is working with a cabinet that’s 50 percent female.

So who are these rare women in the White House? Because technically speaking, Ivanka, Melania, and Kellyanne Conway do not hold cabinet-level positions. Here’s a look at the four women in Trump’s cabinet and what you need to know about them.

What’s her story? In 1980, McMahon and her husband founded the sports entertainment company Titan Sports with the help of 12 employees. Nowadays, that company is known as the WWE (yes, that WWE) and it has more than 800 employees. For a handful of cabinet members, their departments will be new territory, but McMahon is one of the few who has personally lived the story of a small business owner. The once-modest Titan Sports is now valued at $1.5 billion in net worth.

Her husband is still the CEO of the WWE, but McMahon stepped down in 2009 to make two runs for a Republican spot in the Senate. She lost both times and spent an estimated $100 million on the two campaigns.

She also is a partner on the Women’s Leadership LIVE team, which organizes live events, workshops, keynote speakers, panel discussion, and mentorship opportunities for working women.

How does she know Trump? Trump and the McMahon’s are old family friends. Two WrestleMania tournaments were held at Trump Plaza in Atlantic City in the late ‘80s. He once personally faced off with McMahon’s husband Vince in the ring during a “Battle of Billionaires.” The match ended with Trump shaving Vince McMahon’s head in public. Trump’s now a member of the WWE Hall of Fame.

McMahon was a major donor to Trump’s campaign, despite calling some of his comments “deplorable” at one point during the presidential race. She and her husband donated $6 million to the Donald J. Trump Foundation, making them the third-highest donors to his foundation.

What did the Senate think? She was confirmed with an 81-19 vote.

What’s the gig? Haley represents the US on the UN’s Security Council and during almost all plenary meetings of the General Assembly. She is responsible for advocating political, economic, social, legal, military, and public diplomacy at the United Nations. Considering Trump has limited foreign relations experience, this role is more important than ever.

What’s her story? Up until her nomination for this cabinet position, Haley served as the Republican governor of South Carolina for the past six years. As the first female governor of the state and the daughter of two Indian immigrants, Haley has often been respected by both Democrats and Republicans for taking a generally balanced political approach in one of the most conservative states.

In June of 2015 nine African-Americans were shot in a Methodist church in South Carolina by white supremacist Dylann Roof. After pictures surfaced of Roof sporting the Confederate flag, Haley was pressured to remove the same flag from the state’s capitol. While she had fought this notion in the past, Haley finally relented and removed the flag from the government building.

In other regards, Haley remains typically conservative, particularly through her view on reproductive rights. Haley supported legislation to restrict abortion rights in her state. While she won’t be mandating nationwide reproductive rights in her current role, it’s worth questioning how her stance will affect America’s relationship with overseas organizations that promote family planning. As the NYT notes, sexual and reproductive health rights are primary objectives for the UN.

As far as experience goes, Haley is not the veteran international diplomat some hoped for considering Trump’s lack of experience in foreign affairs. She has little experience working from the outside in but has done notable work to bring outside income to the US through increasing international businesses’ presence in South Carolina.

How does she know Trump? Haley’s nomination for this position came as a bit of a surprise. Haley supported Marco Rubio during the primaries and was also a supporter of Mitt Romney. She’s been a harsh critic of Trump’s policies and character a handful of times. Trump has made similarly harsh comments about Haley in response. He once said, “She’s very, very weak on illegal immigration. You can’t have that.”

Haley did not donate to Trump’s campaign. In fact, it’s the other way around. Trump donated $7,000 in campaign contributions for Haley.

But apparently, the two have put their differences aside. When announcing her nomination, Trump called Haley “a proven deal-maker” and commended her on her “track record of bringing people together regardless of background or party affiliation.”

What did the Senate think? She was confirmed with a 96-4 vote.

She will be the principal adviser to Trump’s White House on federal policies, programs and activities related to education in the US. DeVos will also oversee the education department’s programs that provide grants, loans, and work-study assistance to about 10 million undergraduate students.

What’s her story? Perhaps the most infamous of all the women in Trump’s cabinet, Betsy DeVos also doubles as the most controversial. She’s the former chair of the Michigan Republican Party and has experience working in the education world, but not in public education – an important distinction to note. She is most famous for her advocacy of public school alternatives like charter schools, private schools, and the distribution of school vouchers, a certificate of government money given to a family for a student to attend a charter, private or religious school of their choosing.

Her extensive support of charter schools is concerning for many in government because some of these are schools that are funded publicly but run privately, which has the potential to elevate the risk of fraud throughout the system. Considering the president-elect’s recently settled Trump University fraud scandal, this fear is top of mind for many who are wary of her potential agenda.

Betsy DeVos’ confirmation was covered heavily by the media. The Senate gave DeVos a thorough grilling. Considering she will head up all public schools, Senator Elizabeth Warren used her interview time with DeVos to ask her about her experience with loans and public schools. Throughout her swift interview, DeVos admitted she’s never overseen a trillion dollar loan program or taken out a student loan.

Additionally, neither DeVos nor her children attended public school. DeVos went to a private high school and college. Her daughters were mostly home-schooled and her sons went to a high school with a $10,000 tuition.

How does she know Trump? Like McMahon, DeVos is a devout and generous GOP donor. During her confirmation, Senator Bernie Sanders famously asked DeVos, “Do you think if you were not a multi-billionaire – if your family had not made hundreds of millions of dollars in contributions to the Republican party – that you would be sitting here today?” He also asked DeVos how much she had donated to the GOP over the years. When asked if somewhere in the $200 million range sounded correct, Betsy responded, “It’s possible.”

What did the Senate think? Betsey DeVos was confirmed in a 51-50 vote. All 48 Democratic Senators voted against DeVos as did two Republican Senators (Senators Susan Collins of Maine and Lisa Murkowski of Alaska). For the first time in history, Vice President Mike Pence was summoned to the Capitol to break the tie.

What’s the gig? Essentially, Chao is in charge of all things that help things that get Americans from point A to point B, whether it’s a car, train, plane, or boat. She sets rules and regulations for transport. So she’ll play a big role in how much further forward brands like Tesla and Google can innovate when it comes to self-driving cars. She’ll oversee commercial airlines and airport regulations and she’ll also dish out billions of dollars in federal grants each year to state and local authorities to help improve transportation programs throughout the country.

What’s her story? Born in Taiwan, Elaine Chao is the most experienced politician of all the women on Trump’s cabinet. She started her career as a White House fellow under President Ronald Reagan, then became the deputy secretary of transportation under President George H.W. Bush. She was in that role for a year before she was reassigned as director of the Peace Corps where she expanded the organization’s presence in Eastern Europe and Central Asia.

She took a break from the White House during the Clinton administration but returned under George W. Bush where she served on his cabinet as labor secretary for all eight years. This nomination made her not only the first Asain-American woman to serve on a presidential cabinet but also the longest-serving labor secretary since 1945.

During her time as labor secretary, she came under fire for allegedly favoring business gains over worker safety. These concerns were realized after 12 miners were killed in the Sago Mine disaster on January 2, 2006. Before the mines collapsed, Chao cut more than a hundred coal mine safety inspections.

During her time away from politics (during Bill Clinton and Barack Obama’s time in office) Choa became involved in multiple endeavors in the private sector. Up until her cabinet confirmation, she served on the board of directors at Rupert Murdoch’s News Corp and was a director at Wells Fargo, where she made $1.2 million during that corporation’s fake account scandal. She is also a distinguished fellow at The Heritage Foundation, a conservative think tank.

How does she know Trump? Unlike DeVos, Haley, and McMahon, it’s hard to find direct financial ties between Chao and Trump. However, Chao has been married to Republican Majority Leader Mitch McConnell since 1993. The connection has sparked concern that conflicts of interest could potentially arise.

What did the Senate think? She was confirmed with a 93-6 vote. Mitch McConnell voted “present.”

What are your thoughts on the women in the White House? Share with us on Twitter @britandco.