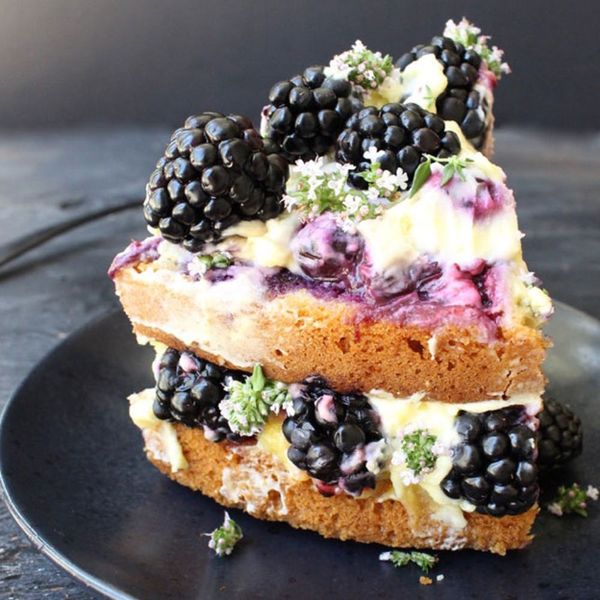 Craving a fruity dessert happens on the regular for us, so it only makes sense that we would put together some of our favorites. Recipes like these are perfect for potluck dinners with friends or whipping up to serve with easy weeknight dinners. There’s a combo of warm, baked desserts perfect for winter and cool ones that you usually see most in summer. Just because it’s cold outside doesn’t mean a girl can’t dream about pies with fresh fruit, right? Whatever event or reason you have for a fruity dessert, here are 17 pretty great options.

1. Spiced Hot Fruit Bake: Vegan and gluten-free, this dish is straight fruit — apple, pear, pineapple and cranberries, to be exact. It’s perfect for a light treat by itself or to top off your favorite pound cake. (via Cotter Crunch)

2. Lemon Olive Oil Cake Recipe With Berries & Mascarpone: We’ve never seen a dessert (or any food, for that matter) that looks this beautiful. It’s one of those desserts that’s almost too pretty to eat, but somehow we think we’ll still give in. The flavors that hold this cake together — lemon curd, blackberry sauce and mascarpone — are off the charts. (via Ciao Florentina)

3. Dark Chocolate Orange Brownies: These look like some of the most decedent brownies we’ve ever seen. Plus, the dark chocolate and orange (extract) combination is completely mouthwatering. One last thing — chocolate buttercream. (via Cake Whiz)

4. 2-Ingredient Watermelon Sherbet: Watermelon sherbet is a first for us. We love watermelon, but it’s not the typical go-to fruit for a dessert. Welcome to the sweet side, watermelon. (via Five Heart Home)

5. Angel Berry Trifle: It’s not just the food we love here, but the dish it’s served in. Doesn’t it just scream party dessert? We think so, and guests are bound to love it with vanilla yogurt, sour cream, whipped cream and, of course, the triple berry combo. (via Jo Cooks)

6. Apple Pie Bites: Croissants are officially good for everything. Baked apples with cinnamon are like a little slice of happiness. Best part? Grab a few (or more than a few) of these on the go with no mess. (via The Blond Cook)

7. Blackberry Crumb Bars: The bar is fantastic because of its versatility. In the winter, it’s a perfectly baked dessert. In the summer, the fresh blackberries hit the spot for just about everyone. (via Chocolate With Grace)

8. Cheesecake Stuffed Strawberries: You only need three simple ingredients to make this yummy cheesecake filling. The rest is all berries and some handiwork slicing up the strawberries. (via Dessert Now, Dinner Later!)

9. Chocolate Dipped Pineapple Slices With Toasted Coconut: So simple, fresh and delicious! The chocolate is dark so it’s a bit healthier, and the coconut offers a nice, subtle crunch. (via The Beach House Kitchen)

10. Cranberry Jello Salad: Thanksgiving may have passed, but cranberry season is always upon us, friends. This cranberry jello is even better because it’s a cranberry salad, which means it’s got crushed pineapple, walnuts and celery mixed in. (via Eazy Peazy Mealz)

11. Creamy Fruit Salad: Talk about potluck-perfect. Everyone loves a good fruit salad, don’t they? Vetoing the usual whipped cream for plain Greek yogurt and a dash of shredded coconut with marshmallows, this recipe ranks pretty high on the healthy list. (via Tastes Better from Scratch)

12. The Best Lemon Curd: Maybe you can’t eat lemon curd completely by itself (if you did, we wouldn’t judge you), but it does make for a bomb spread on scones, muffins, bread… pretty much anything and everything. (via The Food Charlatan)

13. No-Bake Strawberry & Cream Pie: Three words: homemade pie crust. We can taste the graham cracker already and we are drooling. Plus, that slight crunch of the strawberries and the creaminess of Cool Whip — it’s perfect. (via Deliciously Sprinkled)

14. Melt-in-Your-Mouth Orange Vanilla Cookies Recipe: These cookies scream “Bring us to work!” to us. There are two secrets to this recipe: vanilla bean paste and fresh orange zest. Get to the grocery store ASAP, friend. (via A Treats Affair)

15. Lighter Caramel-Cheesecake Stuffed Baked Apples: Just plain old apples usually do the trick when a sweet craving comes calling. However, hollowing out the apple and stuffing it with a cheesecake filling, well that sounds pretty good too… (via Diethood)

16. Fresh Strawberry Yogurt Cake: Yogurt is the best ingredient for cake-based desserts because it makes the bread extra moist and dense. This cake would be even sweeter if you grew the strawberries in your own garden. (via A Spicy Perspective)

17. Triple Berry Crisp: Melty ice cream, crunchy granola and juicy raspberries, blackberries and blueberries, OH MY! You’re going to want to cuddle up with a big bowl of this crisp pretty much immediately. (via Tastes Better from Scratch)

Chloe Gibson
Chloe loves watching Sex and the City reruns and eating. If she's not mixing something up in the kitchen, she's probably day dreaming about her next home renovation project. Along with TV and food, she loves trying fitness crazes to see if they're really worth the effort. Chloe lives and breathes lifestyle writing, but always makes time to post beautiful pictures of her cat, Susan, on Instagram.
Dessert Recipes
Dessert Recipes
Dessert Recipes Pie Recipes recipe roundup
The Conversation