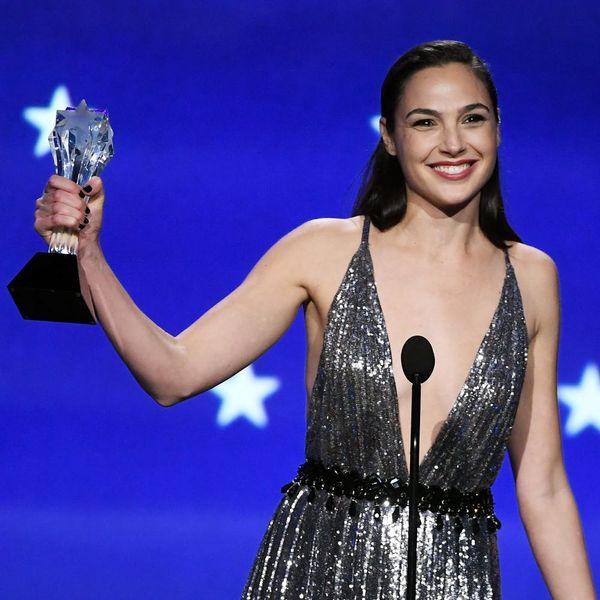 Gal Gadot is having a pretty Wonder-ful night at the 2018 Critics’ Choice Awards. In addition to a standing ovation, the Wonder Woman star received the second annual#SeeHer Award, which is given to someone who helps to “push boundaries on changing stereotypes and recognize the importance of accurately portraying women across the entertainment landscape.”

Director Patty Jenkins introduced the actress, praising her performance in the film (which also won Best Action Movie) and saying, “In her hands, Wonder Woman came back to life in all of her glory and is inspiring the world again.”

Taking the stage after Jenkins’ intro, Gadot thanked the filmmaker, whom she called her “sister,” before addressing the crowd of critics and fellow stars. “I’m blown away to be standing up here in a room filled with so many people who I look up to, respect, and admire,” she began. “Throughout my career, I was always asked to describe my dream role, and it was clear to me that I wanted to portray a strong and independent woman — a real one. The irony of this is that later, I was cast as Wonder Woman, and all of these qualities I looked for, I found in her.”

Gadot continued: “She’s full of heart, strength, compassion, and forgiveness. She sees wrong that must be made right. She takes action when everyone around her is idle. She commands the attention of the world, and in doing so, she sets the positive example for humanity. Wonder Woman also struggles with her own love and hopes. She gets confused, insecure, and she’s not perfect. And that’s what makes her real. We wanted her to be universal, to be an inspiration to all people all around the world. And our plan was to make sure we didn’t give too much attention to the fact that she’s a woman. The whole process of creating this film inspired me, and I hope we managed to inspire others.”

Gadot then noted that three of the top-grossing movies of the year were led by women, and eight other films in the top 100 were directed by women. “Although this is progress, there is still a long way to go,” she said, adding, “As artists and filmmakers, I believe that it’s not only our job to entertain, but our duty to inspire and educate for love and respect.”

She concluded her speech by referencing recent events in Hollywood, saying, “In the past weeks and months, we’ve been witnessing a movement in our industry and society, and I want to share this award with all the women and men who stand for what’s right, standing for those who can’t stand or speak for themselves. My promise and commitment to all of you is that I will never be silenced, and we will continue to band together to make strides uniting for equality.”

What do you think of Gal Gadot’s speech? Tell us @BritandCo.