What Happens When an Art Student 3D Prints Prosthetics 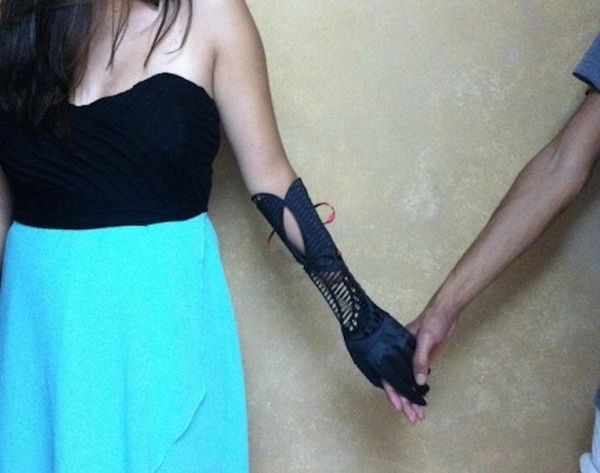 When we were bored in college, we did things like draw vicious dinosaurs on our spiral notebooks or make up weird new drinking games (not at all unlike True American from New Girl). One time we went “summer sledding” on bright yellow cafeteria trays. When Evan Kuester got bored, he made a new body part for one of his classmates. You win, Evan. You. Win.

Needless to say, we collectively “aww”-ed out loud when we read about this heart-warming story on Make Zine. Kuester had access to a large 3D printer and was itching for a side project. He was inspired to create this beautiful prosthetic by a fellow student Ivania Castillo, who was born without a left hand.

Kuester worked up the courage to propose the idea (the two had never actually spoken before!) and despite being a bit surprised, Castillo was on board and the two became fast friends. The first draft took 45 hours to print, and he later entered it into his school’s design competition.

But as any good designer knows, there’s always room for improvement, so Kuester developed this second version to beat the first. It’s sleek, light and — according to Castillo — fits like a glove. The level of detail is absolutely gorgeous, and the new design is much more functional than the first. We can’t wait to see what else is to come from this budding designer.

What would you like to see coming out of a 3D printer? Let us know in the comments!

Annie D'Souza
Annie is the founding father and editor-in-chief of The Midwestival and a long-time jean-on-jean enthusiast.
3D printing
Tech
3D printing