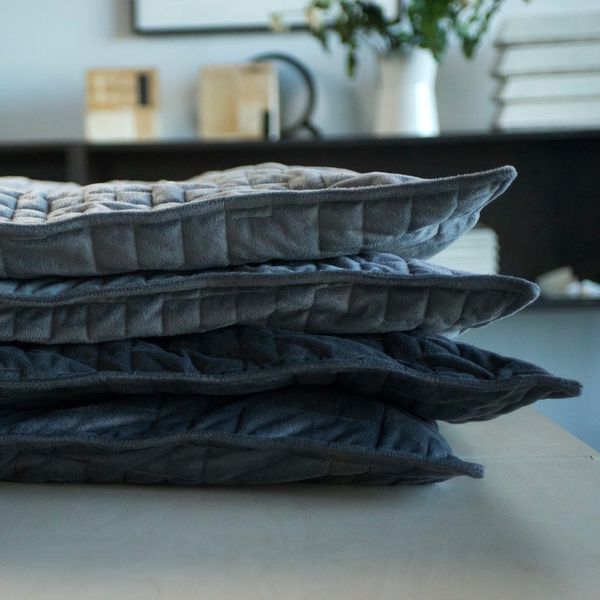 Whether you’re sneaking in some QT with your long-term S.O. on a chilly night or love cozying up on the couch while watching your fave Netflix shows with your BFFs during an adult slumber party, getting snuggly is one of the best ways to de-stress and relax. After all, there’s a reason why people love hugs so much. But what’s a gal to do when she’s all alone? Lucky for all of us, some genius people just invented an ultra-luxe, crowdfunded blanket that will totally do the trick.

Meet the weighted gravity blanket, a Kickstarter fave in prime position to replace the $55,000 potato salad of 2014 as the most adored project of all time. This soft cover is actually engineered to feel like 10 percent of your real weight and gently distributes pressure across your bod. Since the blanket will make you feel like you’re being held or hugged (awwww), it can help produce the same amazing effects that human interaction does. These include increased serotonin and melatonin levels and decreased cortisol, which will leave you feeling happier and more at ease. Hello, blissful, deep sleep!

Though this concept isn’t super new (weighted blankets are pretty well-known to people in medical practice), this is the first time that anyone can snap one up to enjoy all of the health-boosting benefits at home. By the looks of it, people are *really* excited about that; nearly 18,000 people have backed the project, which has now raised over $3 million. Even better? There is still time to jump on the bandwagon and claim your blanket while becoming part of history.

Would you try a weighted blanket to de-stress and sleep? Tell us on Twitter @BritandCo!