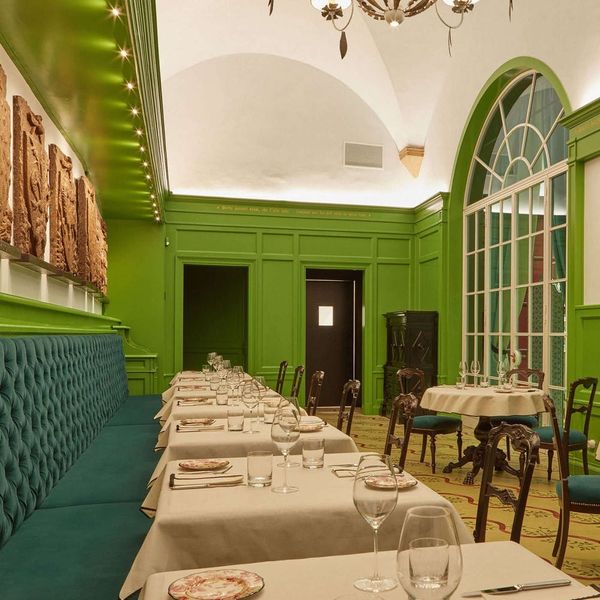 It’s always a recipe for excitement when a brand steps out of its comfort zone. Take, for example, Tiffany & Co, who made the jump from jewelry and silver housewares to breakfast foods with its recently opened Blue Box Café. Now, design house Gucci is following suit, switching gears from (fur-free!) fashion and leather goods to consumables.

The Italian fashion company made the announcement that its new concept store in Florence, Gucci Garden (open as of Tuesday), will not only allow shoppers to peruse its world-famous clothing, art, accessories, and heirlooms, but also to enjoy a nice meal with the introduction of a 50-seat restaurant dubbed the Gucci Osteria.

Diners can find it nestled into the Garden’s bottom floor within the ancient Palazzo della Mercanzia, which was originally built back in 1391 and has housed the Gucci Museo since its opening back in 2011.

According to Harper’s Bazaar, the idea to create a market-type atmosphere where shopping, eating, and revelry come together as one. A ticket to enter the Garden and all its splendors will run you about €8 (the equivalent of roughly $10 USD), and half of that fee will go to different restoration projects around the city.

Would you eat at Gucci Osteria? Tell us @BritandCo!

Shea Lignitz
Shea can be found in the nearest bookstore or brewery, exploring the great outdoors, or blasting Led Zeppelin. She grew up in the cold and rain of Northern California's redwoods but is currently wandering around Texas.
Style
Food News
Style
The Conversation