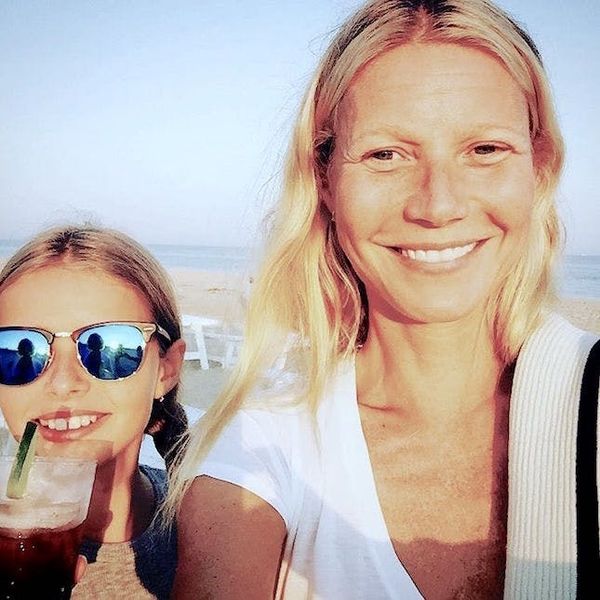 There are lots of moms who save their wedding dresses in hopes that their daughters might wear them for their own nuptials (or how about this dress that’s been passed on to 11 different members of this family? Now that’s an heirloom). It’s common practice for daughters to raid their moms’ closets à la Kylie Jenner, but we can only imagine how awesome that experience might be when your mom is an A-list celeb and she’s been saving all her red carpet gowns for you since 12 years before you were born — which happens to be the case for Gwyneth Paltrow and Apple Martin.

The Mortdecai actress revealed last week that she has been collecting and hanging onto “[her] gowns and special things” well before Apple was but a twinkle in her mother’s eye. “I have everything. I have every Oscar dress,” Gwyneth told People Magazine. Yes, even that famous Oscar dress.

Gwyneth wore this bubblegum pink Ralph Lauren creation in 1999 when she won the award for Best Actress for Shakespeare In Love, and it has since gone down in the history books as one of the most famous Oscars looks ever. And just like any mom, Gwyneth hopes that Apple just might opt to wear the dress to prom someday. “Maybe she’ll wear it to prom and do a Pretty in Pink thing and resew it and cut it up,” the GOOP founder said before saying, “I don’t know if I’d let her chop that one up.”

As gorg as that dress is, someone tell mom that the gown is soo ’90s and totally not what the kids are wearing anymore. (Kidding. That dress is the ultimate prom dress and transcends time.)

Would you wear your prom dress again? Throw your ’90s-riffic pics our way @BritandCo!

Kimberly Wang
Kimberly Wang writes about all things pop culture, tech, style, and beauty. She's a Bay Area transplant and has an MFA in Creative Writing from Columbia University. On a sunny New York day, you can find her hanging out with her mini schnauzer Isabelle Jellybean on a blanket in Central Park.
Dresses
Style News
Dresses Gwyneth Paltrow Oscars