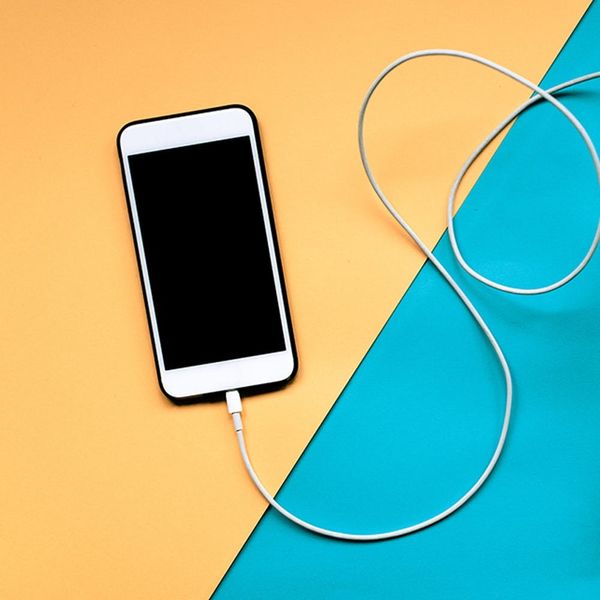 I know I’m not alone when I say that I fight an ongoing battle between itching to know what’s happening on my Instagram feed and hating the feeling of being attached to my phone. As much as I love the idea of perpetual connectivity, when I actually engage on a near-constant basis with what’s happening on my iPhone, I — to put it quite bluntly — feel pretty terrible. I reflect back on my days knowing all too well that I missed plenty of opportunities to read a book for a few extra minutes or to have a high-quality face-to-face conversation with a person who was probably right in front of me. Phone boundaries are a challenge for so many of us in 2018, and while achieving them successfully feels a little daunting, it’s something that many of us aspire to.

I jumped on the New Year’s resolutions bandwagon a few months ago and decided that setting these boundaries with my phone was a perfectly reasonable goal for the year ahead. In the month of January, I played around with a few strategies that the internet suggested might be the key to a successful conscious uncoupling between iPhone and me. By February, I’d honed in on what really seemed to be working. Now, in March, I can confidently say that there are two small-but-mighty hacks that have made a huge difference in the way I interact with the device that I so love to hate and hate to love. Read on for the inside scoop on these strategies, as well as some insight from experts that helps explain why they’ve been working so effectively.

I stopped scrolling in the morning

This is embarrassing to admit, but I know I’m not the only one, so I guess I’ll just put it out there: I used to start every day with an extensive Instagram review. Before even getting out of bed, brushing my teeth, or saying more than a grumbly “good morning” to my husband, I’d be tucked under the covers with my phone, using the screen’s dim light to help ease me out of sleep and catching up on the (very little) that I’d missed in the time I was snoozing. By the time I had breakfast, I already knew what people were wearing for their #OOTD and how others were celebrating #throwbackthursday. I’m not going to say it was an unpleasant way to wake up, but I did realize that it was severely cutting into my day and potentially starting it off on the wrong foot too.

I started making a point of — and I know this might sound a little crazy to some of you — not. even. touching. my. phone first thing in the morning. Now, when the alarm rings, I turn it off (and, yes, my alarm is on my phone) and immediately get out of bed. For the first few days, I definitely had to fight the urge to check my notifications and dive right into Instagram, but it’s now become such a habit that by the time I’m halfway through my morning routine, I’ve mostly forgotten that my phone is still on the nightstand. I review social media whenever I have a free moment, but the point is that I’m no longer looking to other people to set the tone for my day. I also find that changing the way I interact with my phone first thing in the morning has changed the way I interact with it all day long.

Arianna Huffington — who has become a major advocate for better phone boundaries and recently launched the THRIVE app to help us all combat tech burnout — confirmed my suspicions in an email interview. “Resisting your phone and creating these spaces at the beginning… of your day reinforces your sense of being in control of your relationship with technology,” she says. “In the morning, taking a few minutes to breathe, or meditate, or just set your intention for the day — not just what you want to get done, but what kind of day you want to have — can stay with you for the rest of the day.”

If you want to feel more in control of your relationship with your phone, consider starting with the mornings. Trust me — it goes a long way.

I stopped scrolling out of boredom

When I was a kid, I hated TV commercials. Didn’t we all? So annoying, right?

Well, over the last few years, something weird has happened… I stopped hating commercials, because — even though they still air as usual — they’ve become a non-issue for me. Bored during an ad? Just pick up your phone and start tapping aimlessly at the screen. Boredom solved!

The same thing happens when I’m standing in line at the pharmacy, or if I’m not in the mood to read on the subway. My iPhone has become a faithful anti-boredom companion. I realized, though, that it’s in these moments that I become most wasteful with my time. Why scroll through the same Instagram posts all over again when I can use the time imparted by a redundant commercial to read a few pages of a book? Why stare blankly at Twitter during my train commute when I can listen to a podcast, which, while admittedly played from my phone, can teach me something or at least make me laugh? I decided to try to stop using my phone as a crutch for these so-called “dead” moments of my day.

I’ll admit that this one has been a bit more of a challenge, as it’s less clear-cut. I try to leave my phone in the kitchen if I’m going to the couch to watch TV, or to leave it in my bag while I’m on the subway, but it’s not as straightforward as simply not looking at it first thing in the morning. It’s sort of an honors system situation, because only I know when I’ve crossed the line from harmless scrolling to gratuitous time wasting. Some times I’m better at it than others, but I’m trying really hard, and I do think it’s encouraged me to spend my time differently.

“Our phones have become a security blanket so that we no longer have to feel bored or uncomfortable,” lilspace founder Kim Anenberg Cavallo says. “Every time we use our phone to avoid boredom or socially awkward situations, we are missing another opportunity to develop our own mental stamina.”

Huffington echoes these sentiments. “Being bored, letting our minds wander, allowing our brains to spin down and idle is incredibly important,” she says. “That’s what allows us to be inspired, think of creative solutions to problems that have been nagging at us, or just hear our own inner voice and connect with ourselves.”

I definitely want to develop my mental stamina and stay inspired, and while I can’t say for sure whether those things have happened for me after just a few weeks with these new boundaries in place, I can confirm that they’ve helped me take a much-needed step back from my phone. The most surprising thing? I really don’t miss it.

How do you set healthy boundaries for using your phone? Tweet us @BritandCo!

Alli Hoff Kosik
Alli Hoff Kosik is a freelance writer who is passionate about reading, running, rainbow sprinkles, her lipstick collection, watching embarrassing reality TV, and drinking pink wine. She lives in Brooklyn with her husband and (in her dreams, at least) three golden retriever puppies. Listen to her talk books on The SSR Podcast.
Adulting
Tech
Adulting Healthy Living iPhone
More From Tech