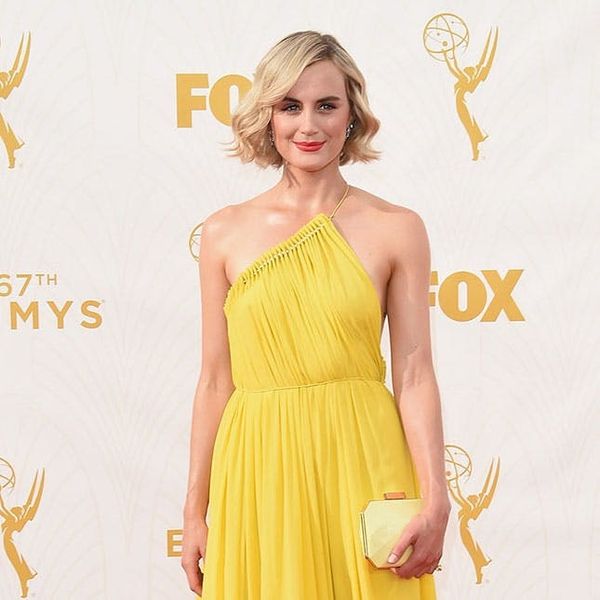 “Getting dressed” is a term that’s used very loosely among stars stepping out on the red carpet these days. So, when we tuned into the Emmys tonight, we were expecting our jaws to drop over the racy cutouts, sheer panels, plunging necklines and thigh-flashing slits that have been dominating dresses this past season. But tonight, barely there styles were, well, barely there. It seems like stars have finally had their fill of fashion tape, opting for styles that hit the floor (and stayed there) and proved that shoulders are the new pelvage. Sound boring? Not in the slightest. See the two covered-up, but still-sexy dress styles that dominated the awards show — and that you can *actually* pull off IRL, no speciality bra or underwear necessary.

Necklines spiked on the Emmys red carpet tonight, and the array of halters proved that there’s a high neckline to suit just about every style, from the ’70s-feeling slings on Zoe Kazan and Joanne Froggatt to the ‘90s style spaghetti straps around Amy Poehler’s and Taylor Schilling’s necks to the thicker single-shoulder styles worn by Lady Gaga and OITNB star Samira Wiley. But the halter that stole the show was Mad Men actress Jessica Pare’s gown, which gave a whole new meaning to “chic top knot.” We also loved Uzo Aduba’s high-neck dress that was in the same stunning shade of rosey pink.

Zoe Kazan: A statement necklace and a stunning dress all in one is the lazy girl way to look insanely glam. (Photo via Mark Davis/Getty)

Taylor Schilling: The asymmetric neckline is everything (but that ruffled hemline is pretty major too). (Photo via Jason Merritt/Getty)

Samira Wiley: Here’s why you should never choose between a minimalist silhouette and a bold pop of color. (Photo via Mark Davis/Getty)

Lady Gaga: This might be the easiest way for a black dress to feel anything but boring. (Photo via Mark Davis/Getty)

Uzo Aduba: The OITNB actress shows that the traditional criss cross is just as pretty as any take on the style. (Photo via Mark Davis/Getty)

Off-the-Shoulder Dresses from the 2015 Emmys

Straps aren’t staying in place, and that’s a good thing when it comes to these off-the-shoulder styles. The not-quite sleeves style creates a striking silhouette no matter if they zip straight across the chest like on Sarah Paulson’s sparkly gown and Kiernan Shipka’s yellow top, create soft curves like on Sarah Hyland’s and Natasha Lyonne’s floor-length gowns or go every-which way like on Julie Bowen’s not-so-basic black dress.

Kiernan Shipka: Raise your hand if you’re gonna try an off-the-shoulders dress over ants on Monday? (Photo via Mark Davis/Getty)

Natasha Lyonne: Proof that fringe goes with everything. (Photo via Jason Merrit/Getty)

What dress trends did you spot at the Emmys tonight? Tell us in the comments below.