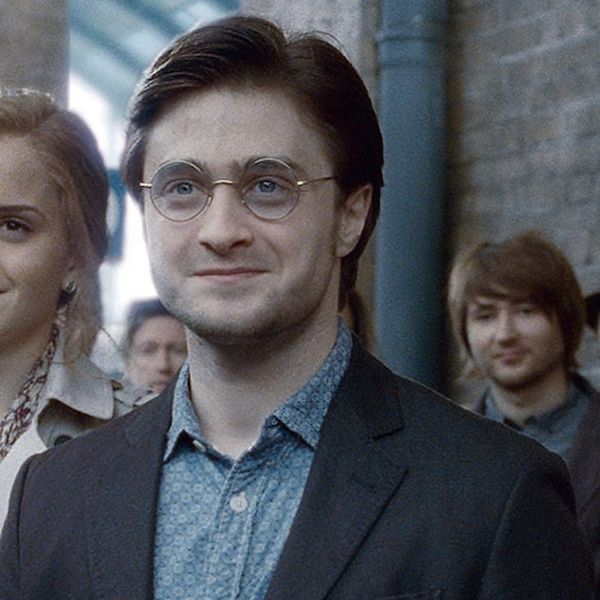 I had a boyfriend growing up. He was smart and funny. He had kind of a difficult past but he was up front with it and I got along with all his friends and loved him very much.

I know I’m not alone in the HP fandom (that’s me on the left the day Deathly Hallows came out). I was a little… um… obsessed. But I’m not the only one. It’s nice to know that years after the books and movies ended we have had a ton of outlets to keep our love alive via cool accessories, freaking sweet new versions of the books, and dope HP news via JK Rowling’s epic Twitter. Yeah we used epic, want to fight about it?

HP would have turned 35 today(if he was a real live person who could actually date me) and below are some thoughts about what a middle aged boy wizard would look like. (See also this rare footage of what Ron Weasley looks like at 35.)

The spell “accio Firewhiskey” would be used twice as often.

His kids come home from a day of school and he can’t help them figure out their homework problems. “Sorry, kids, when I was in school an evil despot ALWAYS interrupted our final exams so I really didn’t retain a ton.” As he leaves the room he mutters “expelliarmus” under his breath.

His scar is partially obscured by forehead wrinkles.

When an acquaintance asks about his prowess as a seeker back in the day Harry chuckles and says: “I had 99 problems but a snitch ain’t one!” He laughs loudly for several minutes before getting self conscious and muttering, “It’s um, that’s from a song I think.”

His doctor tells him to start worrying about high cholesterol. “Too much fatty food could kill you,” he advises. Harry rolls his eyes: “Son, I’m Harry Freaking Potter! I killed freaking Voldemort at the age most kids are applying for colleges. I FREAKING ALREADY DIED AND CAME BACK, AIN’T NO SUCKA CHOLESTEROL GONNA TAKE ME!” He returns to the office pouting a few hours later to refill his prescription at Ginny’s request.

He is still confused about how to file taxes, turns out even wizard school doesn’t teach something useful like that.

Ginny catches him one day in the bathroom using his wand to track down a rogue grey hair. She’s relieved that at least this time the hair he was looking for was on his head.

He has a Butterbeer belly

“What do you call a hirsute ceramics master?” he asks his kids at a dinner party. Before they even respond he screams “A HARRY POTTER,” and laughs uproariously to himself for several minutes.

Any time his kids have friends over he can be seen absentmindedly polishing the Triwizard Tournament cup, just begging someone to ask about his glory days.

Ginny tells him to get ready for a wild night once the kids are away at Hogwarts, he fantasizes about finally catching up on all his Netflix shows.

“Have I told you about the time I rescued your mum from the Chamber of Secrets?” he asks his kids on road trips. “A thousand times, dad,” one of the mouthy ones (likely Albus Severus) replies before they go back to playing with their magical iPhones.

He can’t help shake the feeling that by killing the dark lord he really “peaked” at 17.

How are you celebrating HP Day? Accio comments!

Molly Sanchez
Molly Sanchez is a writer, comedian and lover of burritos everywhere. She has written for The Bold Italic, Liquid Bread, Thrillist and HelloGiggles. She devotes her time to Bloody Mary research, exploring San Francisco and promoting wide spread shower beer awareness and appreciation. Find her on Twitter @seriousmolly trying to get famous people to laugh at her jokes or on Instagram @mollyfuckingsanchez where she swears a lot.
Birthday
Home News
Birthday Books Harry Potter HP