12 Harry Potter Cocktail Recipes That Will Stupefy Your Muggle Friends 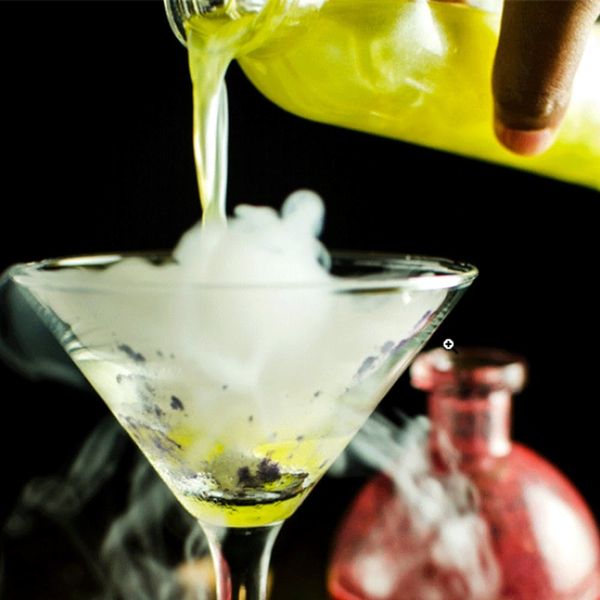 One of the most magical things about the JK Rowling series is how very believable the food and drinks sound. No doubt about it, the Wizarding World is a foodie paradise. And while countless muggles have tried to recreate the drinks, we’ve got secret recipes that rival even those of the Harry Potter Restaurant — and you won’t need an Ollivanders magic wand to pull them off. So, round up your gang of wizards and muggles, and prepare for some serious mixologist sorcery. To celebrate the release of Harry Potter and the Cursed Child today (the official script book of the London production), here are 12 Harry Potter cocktails that will teleport you to the hearth at the Hogshead Pub without the magic of Floo Powder.

1. Butterbeer Cocktail: While nonalcoholic recipes for Butterbeer abound, this version has some kick, thanks to vanilla vodka, butterscotch schnapps and a glug of Guinness. A couple of these will have you dancing around like happy house elves. (via Cooking With Curls)

2. Unicorn Blood Cocktail: The secret to this gorgeous-looking cocktail is the “shimmery liqueur” recipe, which provides the magical silvery swirls. But it’s the homemade raspberry puree that makes it taste so delicious. Disclaimer: No unicorns are harmed in the making of this cocktail. (via The Flavor Bender)

3. Polyjuice Potion: In Harry Potter and the Chamber of Secrets, Hermione concocts a batch of this potion to make herself, Ron and Harry look like Millicent, Crabbe and Goyle. The recipe in the book calls for a hair of the person you want to transform into, but if JLaw is not around, you can substitute a drop of blue food coloring. (via Pepper)

4. The Goblet of Fire: The original goblet of fire was brought out to choose which person from each school would compete in the Triwizard Tournament. In the book, one sip bound the chosen challenger to a binding contract. This version is so delicious you’ll be *bound* to nothing more than finishing the glass — pyrotechnics optional. (via Little Pink Blog)

5. The Albus Dumbledore: Inspired by Professor Dumbledore’s love of the muggle sweets that we call Lemon Drops, this cocktail is made with lemon vodka and topped with coconut whipped cream. It tastes light and fizzy, reminiscent of an Orange Julius. (via E-Rad’s Cantina)

6. Firewhisky: In The Deathly Hallows, Harry gets his first taste of firewhisky, toasting the memory of fallen hero Alastor Moody. Serve this up neat when courage is needed, or mix it with a bit of ginger ale for a tasty but less fiery cocktail suitable for parties. (via Wizards and Whatnot)

7. Witches Brew Cocktail: Though not referenced by name in the series, this punch is an homage to the Hogwart’s spirit. It can be made ahead of time in big batches, freeing you up to mingle with the other witches… er, we mean guests. Made of orange juice, pomegranate juice and citrus vodka, it goes down *real* easy. (via Cooking With Curls)

8. The Severus Snape: This dark drink is inspired by Professor Snape’s ebony ensemble, but the spike of rich, flavorful amaretto might represent his hidden good qualities that are floating in the sea of darkness that is his soul. You could mix this cocktail using any cola, but Dr. Pepper gives it an appropriate edge. (via E-Rad’s Cantina)

9. Polyjuice Potion: No Harry Potter party is complete without a big vat of Polyjuice punch. This recipe calls for lime sherbert, vodka and soda, and it bubbles up ominously when first mixed. Serve it immediately after pouring so that your guests can get the full effect. (via Cooking With Curls)

10. Polyjuice Potion Jelly Shots: These creepy gelatinous blobs are made with pineapple juice, pineapple vodka, ginger ale and lime sherbet, and are just as tasty if you leave out the alcohol so that you can serve them to kids. Remove the jellies from their molds before they’re completely set if you want to get the right ghastly bubbly-potion effect. (via Jelly Shot Test Kitchen)

11. Voldemort Cocktail: The You Know Who Cocktail is dark and dangerous, calling for two parts black sambuca, one part absinthe, 1/2 part gin, a shave of lemon zest and a dash of bitters. The sambuca gives it a pungent taste and the bitters and zest add a distinctly bitter flavor. Hmmmm, pungent and bitter, much like You Know Who. (via The Pegu Blog)

12. Pumpkintini: Like Harry’s favorite pumpkin juice, this blend of pumpkin puree and coconut milk is refreshing and delicious. Unlike Harry’s sipper, though, this one is spiked with white rum and whiskey. Rim the glass with crushed graham cracker crumbles and it’s like drinking pumpkin pie. We think grown-up Harry would approve. (via Cooking With Curls)

Sally Jones
Sally Jones is a writer and editor living in New York City. She has worked at many websites including iVillage, Ladies Home Journal, More, Parenting, Cosmopolitan, The Knot and YourTango, in jobs ranging from editor to COO. Renovation and interior design are her unhealthy obsessions hobbies. She has renovated every home she's lived in, including the rentals, and like... whoa, who does that? You can catch her at her blog Renov8or.
Harry Potter
Cocktails
Harry Potter
The Conversation
Reviews:
More From Cocktails