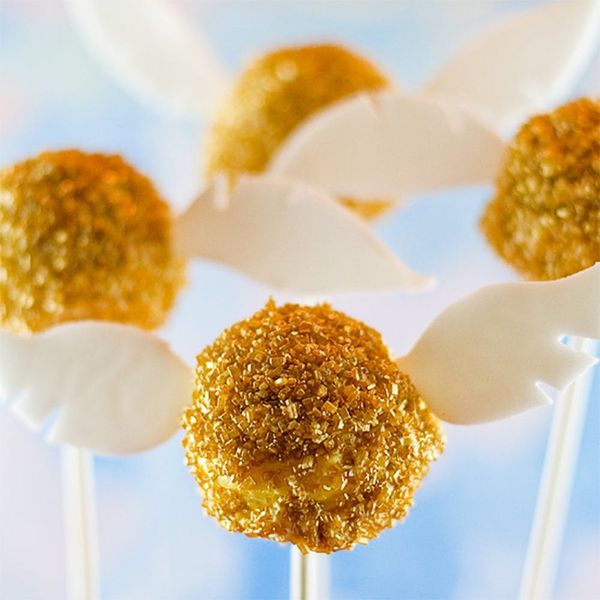 If there’s any group of people who know how to do the holidays right, it’s wizards. Yes, you heard right: wizards. When they deck the halls, they *really* deck them, as in, using magic to conjure a light, pleasant flurry at a 40-foot-long dining table piled high with enchanted puddings and chocolates. Whether you are attending a Yule Ball or just bingeing on the HP series in the comfort of your own home (psst, with pretty new book covers), these 23 Harry Potter-inspired treats are sure to tantalize — no sorcery required.

1. Honeydukes Candyfloss Cupcakes: Though there’s no mention of these bubblegum pink cupcakes in the Harry Potter books, Darla from Bakingdom was inspired to create these after a trip to the Wizarding World of Harry Potter. Something about these cupcakes *are* inspiring — the adorable pom pom toppers no doubt help! After tasting one, you might be inspired to have another. (via Bakingdom)

2. Luna Lovegood’s Pudding: As Luna Lovegood once exclaimed, “I hope there’s pudding,” always. This pudding, though not mentioned in the books, can only be explained as Luna in pudding form. It looks other worldly and it’s Nargle-free. (via Spoon Fork Bacon)

3. Madam Pomfrey’s Pumpkin Juice Smoothie: Pumpkin juice is as common in the wizarding world as orange juice is here in Muggle world. While there’s no actual pumpkin juice in this recipe, there is pumpkin puree, plus other orange food like carrots and oranges. They all get a whiz in the food processor for a healthy smoothie Madam Pomfrey would be proud of. (via Gringalicious)

4. Ron Weasley Sweater Cookies: Twisted marshmallow fondant ropes create a sweet sweater texture for these sugar cookies that Ron would love, if only because they’re cookies and not an itchy sweater he has to wear at Christmas. (via Bakingdom)

5. Acid Pops, Cockroach Clusters, Licorice Wands and Chocolate Frogs: You don’t have to be a wizard to know the best part of the Hogwarts Express is the delectable, curious foods from the Honeydukes trolley. Unlike Muggle snacks, Honeydukes treats involve some sort of magical gag, like burning a hole through your tongue (hilarious!). Fortunately for your tongue, these recipes are trickless. (via A Pastry Affair)

6. Golden Snitch Cake Pops: Everyone at your party can catch a golden snitch with these beautiful cake pops. Victory still tastes good (and a lot like yellow cake), even when you don’t have to work for it. (via With Sprinkles on Top)

7. Treacle Tart With Brown Butter, Rosemary and Lemon: In the presence of the most powerful love potion, Amortentia, Harry smells treacle tart. That probably means that there’s treacle tart in Amorentia and Amorentia in treacle tart. Feed this to that special someone in your life (duh!). (via The Sugar Hit)

8. Frozen Butterbeer: If Hogwarts offered summer school courses, this would be the most popular drink at The Three Broomsticks. Refreshing and fizzy, this version of butterbeer gets the taste right without weighing you down, which is especially good if you plan on flying your broomstick home. (via Bakingdom)

9. Cauldron Cakes: Cauldron cakes are a staple of the wizarding world. Though many witches and wizards make their own, they were most commonly available from the Honeydukes trolley on the Hogwarts Express. Save yourself the train ride and make these magical cream-filled cupcakes at home. (via A Pastry Affair)

10. Butterbeer: This classic recipe for butterbeer is non-alcoholic, so even house-elves can drink their fill and not worry about catching a broom-ber home (like “Uber,” get it?). It’s as if you took a port-key to your favorite divey pub in Hogsmeade. (via Pepper)

11. Mrs. Weasley’s English Toffee: Mrs. Weasley’s homemade toffee is the perfect and most English edible gift for loved ones during the holiday season. It *was* the first Christmas package Harry received from the Weasley family, so it’s known for its magical homesickness- and loneliness-curing abilities. (via Food in Literature)

12. “Polyjuice Potion” Jelly Shots: If there’s anything you need to know about Polyjuice potion, it’s that it does *not* go down easy— but it is necessary when you’re trying to impersonate a Death Eater to save the whole wizarding world. Of course, anything that doesn’t go down easy can be remedied with a jelly shot. (via Jelly Shot Test Kitchen)

13. Chocolate Gateau: Though there’s nothing outright magical about this luxurious flourless chocolate cake, which made an appearance at the Welcoming Feast of the Triwizard Tournament, the taste and fudgy texture are something to behold. (via La Pêche Fraîche)

14. Butterbeer Ice Cream Floats With Coconut Caramel Ice Cream: We like to imagine this butterbeer float was on the Three Broomsticks’ secret menu. If too many Hogwarts students found out, it would definitely be sold out. (via Gringalicious)

15. Harry Potter Inspired Pumpkin Pasties Two Ways: J.K. Rowling never specified whether pumpkin pasties, another staple of the Honeydukes trolley, were savory or sweet. Catherine of Bijoux and Bits believes in true British fashion, the pasties would be savory like British meat pies. To appease wizards of all tastes, she provides both sweet and savory recipes, all of them delicious. (via Bijoux and Bits)

16. Butterbeer (Butterscotch) Hot Chocolate: Cocoa powder makes this already rich butterbeer even more indulgent. Save it for an after-your-O.W.L.-study-sesh treat, as it might put you to sleep. (via Bakingdom)

18. Death by Butterbeer Cupcakes With Treacle Butter Frosting and Chocolate Covered Pretzels: These cupcakes are the ultimate Harry Potter tribute. They’re basically a combination of three of the wizarding world’s most scrumptious goodies: butterbeer, treacle (okay, it’s British, but Harry’s favorite) and a take on a cockroach cluster. If butterbeer cupcakes are the the end of you, at least you can admit it’s not a bad way to go. (via Half Baked Harvest)

19. Molly Weasley’s Rock Cakes: In case you weren’t aware (we weren’t), rock cakes are a real English treat. A cross between a cake, a biscuit, and a cookie, rock cakes are a staple in Hagrid’s hut — but nobody’s trying to lose a tooth here. For the most delicious rock cakes, take a page from the best cook in Harry’s inner circle: Mrs. Weasley. (via Bakingdom)

20. Butterbeer Cookies: When the trip to Hogsmeade is just too out of the way, whipping up a batch of these butterbeer cookies will do. Fill a parcel with these for your loved ones and have your owl deliver them this holiday season. (via Cookies and Cups)

22. Florean Fortescue Butterbeer Ice Cream: This ice cream version of every wizard’s favorite butterscotch drink is the sweet bite you crave after dinner. Serve atop Harry’s favorite treacle tart for the ultimate decadent holiday dessert. (via Food in Literature)

23. Butterbeer Popcorn: This sweetly spiced butterbeer popcorn pairs well with a raucous Quidditch game (totes okay to cheer with your mouth full). This popcorn would make a great update to the tins of butter popcorn traditionally gifted around the holidays. (via An Edible Mosaic)

Do you love food and Harry Potter? Tweet us your favorite dish from the wizarding world @BritandCo!